26 December 2017 – Today I will be crossing the border from El Salvador to Honduras. I loaded up and said goodbye to the hotel staff. For some reason Blanche did her very best to steer me toward San Miguel and then toward El Amauntilo the border. That meant going backward and then driving toward the border. She has a very strong will. I was able to overpower her and steer her on the straight and narrow all the way to the border. I was met at the border by the usual helpers wanting to help you get across the border. Leaving the country went well. My helper presented my paper work to exporting Customs and everything was good. I went to immigration and got my passport stamped out of El Salvador.

Something I may have never mentioned is El Salvador no longer stamps passports. They swipe them and you’re in or out of the country. So, I’m now officially processed out of El Salvador. I paid my helper and was happy everything was moving so smoothly. About this time a new helper shows up to help me through Customs and Immigration into Honduras. The intensity of his help is ratcheted up a notch or two. A real high-pressure sales pitch. My first helper is never very far away. It makes me think they are working together like you see in the cop shows. The good cop and the bad cop but they’re both working together to manipulate you in the direction they want. I think the depth of the manipulation goes beyond that. They my have lessor players who look like travelers who automatically step out of line when asked, just to make you think you’re moving through the paperwork maze a little faster. I believe I fell for that.

I eventually made it through Immigration. Immigration took a photo of me and an electronic scan of all ten fingers. That’s just in case I get one or two of them chopped off by a drug dealer. That’s a joke. Anyway, I was told my paperwork for my motorcycle is being processed so I’d have to wait. I probably wait 30 minutes and my helper shows up and I owe 600 or 700 US Dollars. I said, holy shit, that’s a whole lot of money. A lot of things going through my head right now. I’m getting scammed really badly. I said to my helper “no money without a receipt” and will not give him any money. I only pay Customs officials, and I watch them write me a receipt. So off to the window we go. It is then told to me it’s Honduran Lempira not US Dollars – about $25-$30 US. So, I dug the money out and paid the Customs official. Everything was good to go. I was finished with Honduran Customs and Immigration.

I went back to my motorcycle and this is where the line was drawn in the sand. Remember my helper and his friend from the El Salvador who have never been apart since they met on the El Salvador border side of no man’s land? They were there to back each other up in case of a problem with me. So, my Honduran helper says he wants $40 U.S. Dollars for all his services. He truly wants U.S. Dollars. I told him I didn’t have U.S. Dollars because El Salvador took all my U.S. Dollars. I can pay him in Honduran Lempira. He begrudgingly took the money. At the same time, he said, if you don’t want to have problems with the police stopping you, pay me $45 Dollars / 1035 Honduran Lempira. There was another slimy guy pretending to be my friend all through this border crossing. I tried never to talk with him. He said he lived in Orlando, Florida for a while. I’m guessing until he was deported by U.S. Immigration Authorities. He also was trying to get me to pay this $45 Dollars. I wanted to get off this subject because it was going nowhere. I said, I will give you money for the police and you will give me a receipt. They said, no way. You can never do that with bribes. Well, no $45 Dollars. They said they wanted to take a picture of me to forward to their friend on Honduran / Nicaraguan Border so he could help me through Customs and Immigration. They even called him up and had me talk to him. I must have been a real sucker to attract all these creeps.

The creeps told me I was finished with Honduran Customs and Immigrations and to give a copy to the Customs person 500 Yards / 500 Meters down the road. I asked them to lead the way. It was just a lack of trust with these guys that I did that. They took a 3-wheeled taxi to the check point. I provided the copy to the Customs person and was good to enter Honduras. This was the straw that broke the camel back. They wanted me to pay them $5 dollars /115 Lempira for the taxi fee. I told them that was a lie. I said if the taxi fees were that expensive the taxi cab driver would be living in the United States. I gave them something again but I don’t remember the amount of Honduran Lempira. I was finally rid of them and their shenanigans. Thank God. 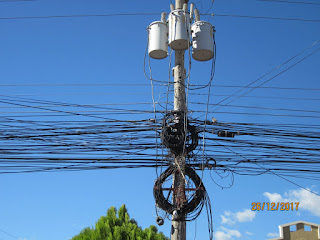 I was coming up on Choluteca and I needed to purchase some more Honduran Lempira. I asked Blanche if she knew where there was an ATM. Sure enough she did and drove me right to the bank. I purchased the Lempira and was about to leave when I looked up the light pole. I saw this rat’s nest of wiring and had to take a picture. I saw multiple electrical poles with similar rat’s nest of wires all around the city. I wondered how they avoided electrical fires as I drove all the way across Honduras 93 Miles / 150 Kilometers.

Once I passed Choluteca I started looking for a hotel. I wanted to stay in Honduras one day to rest up from the border crossing the following day. I also didn’t want to have anybody waiting for me at the border with ulterior motives. I stopped at one hotel which was a real nice place. They wanted $50 Dollars / $1,179 Lempira. I thought that it was too expensive and continued on looking for hotels. I reached San Marcos de Colon. This town is a short distance from the Customs and Immigration at the border of Honduras / Nicaragua and I hadn’t seen one hotel. When I reached San Marcos de Colon the signs showed hotels. I checked inside the city and sure enough there were hotels. The nice hotel was closed down. The operating hotel was too near the market with no security for my motorcycle and the third had drunks sleeping on the sidewalk around it. I decided to move on and see if there were any hotels up by the border.

I got to the border and there was not one hotel to be seen. I drove up by the Customs officials and asked them if there were any hotels in the area. They told me that Somoto and San Marcos de Colon were the only two towns that had hotels. They said that while I was here, I could cross the border to Somoto. It was 7:00 p.m. so I declined their offer. The whole border was void of people, cars and trucks. It would have been a good time to cross but I’ve heard too many horror stories about night crossings and riding motorcycles in the dark. So, I rode my motorcycle back to San Marcos de Colon looking for a spot to camp for the night.

I reached the town again. Slim to no sign of a place I could put up a tent. I drove by a soccer / football field and I said, there a spot that has potential. I thought I will drive up a little farther and see what lays ahead. I think I saw roadside motorcycle mechanic business coming into town that seem pretty popular with the young lads. Maybe if I ask them they can help me out. At this point I was tired and it was getting dark. I didn’t want to be on the road anymore.

I was pulling over and stopping at the roadside motorcycle shop when I saw this car pulling up behind me. I thought it odd but didn’t pay any mind to it. I was just about to ask one of the 5 to 8 guys sitting around talking if they knew of a hotel where I could stay. Now if you do not believe in God or some Divine Intervention you should start right now. Just at that moment when I was about to spea, a man laid his hand on my shoulder and asked “do you need help?”  It was a soft, non-threatening voice. I looked at him and said I’m looking for a hotel that has security for my motorcycle. He was wearing a white polo shirt that said something about BMW cars or motorcycles. I’m unsure which, but it looked like cars if was to make a bet. Anyway, he said “I can show you a hotel that will provide security and has nice rooms.” He drove less than 5/8 of a Mile / 1 Kilometer, and I followed. He went inside and spoke to the receptionist. He came back and said they can provide security for your motorcycle and a room. I was happy. I went in and checked in. He left me his telephone number and e-mail. He said he was a fellow motorcycle rider and if I needed more help with problems I should give him a call or e-mail him. His name was Marion Arevalo. He disappeared into the night and was gone. I sat there and thought about that and just couldn’t believe what had just happened. How did this guy know I needed some help and could speak English? This kind of stuff happened to me while I was driving through Russia once or twice. Anyway, I couldn’t thank him enough for his help. I asked him how he knew I need help.  I believe he said that I was driving too slow, looking left and right, and then I pulled over and stopped. That’s when he pulled over and offered to help me. He came at exactly the right time.

When I finally got everything unloaded off my bike I was a little hungry. I pulled out my secret stash of bread and peanut butter. Some of my French bread had gotten moldy on me. I looked at it, thought for a second, pulled off the mold and ate the rest of it with peanut butter. I ate the two small loaves and ate a small jar of peanut butter.  I went to bed thinking somebody upstairs must be looking out for me. The hotel had good wi-fi which was a plus. I decided I was going to stay another day and work on my blog. I also was going read up on anything I could find about crossing the Honduras / Nicaraguan Border with a motorcycle.
Posted by Beauty at 10:29 AM