17 January 2018 – Today I had to go retrieve my motorcycle. After breakfast I hopped on the 8:00 a.m. Courtesy Shuttle to the airport. After the shuttle driver dropped off the 3 Americans at the airport he dropped me off at the gate where I can get into Air Cargo Pack Office. I gave my passport to the guard and he scanned it, and then allowed me to enter the rotating gate. I hiked over to the office and entered the building. Trying to retrace my steps from yesterday and looking like I knew what I was doing, I went up the stairs, opened the door, and walked down the corridor. I walked past the office door and to my surprise, there were no Air Cargo Pack people to be seen. I had entered the wrong office. So I tried again. I walked down to the next office, hiked up the stairs, opened the door, and walked down the corridor to a different office. Eureka! It’s the right office with the right people. It’s after 8:00 a.m. and not everybody is at work yet. The office lady who walked me to the hotel last night had just arrived. I sat down and waited until everybody got themselves settled. After they did, they asked me for my paperwork because it had to have a new date. I filled everything out and signed everything again. 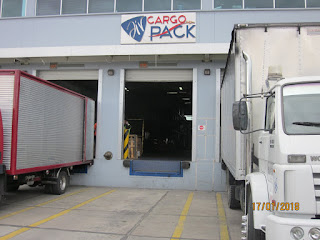 Now it was time to go find my motorcycle. The office lady led me over hill and dale to get to my motorcycle. When we got down on the cargo terminal floor, there my motorcycle sat on the center stand. I was wondering how they ever got my bike on the center stand with all the bags and tires on it. That would be a four-person job. I imagine a fork lift was involved. I’ll have to look underneath it to see if I can see any scarring from the fork tines on my skid plate and on the aluminum swing arm. I locked Blanche on to the handlebars while the lads were tying up loose ends. I was also wondering how this thing is going to get to ground level. I’m either leaving by a back entrance or the motorcycle will have to leave off the dock. The dock is at least 5 feet / 1.5 Meters above ground level. That’s quite a jump for my old Kawasaki, which I affectionately call the Quackasaki. They must have something in mind that I don’t know about.

Well, I learned they have a lifting frame which you drive your motorcycle into until front wheel stops against the frame. That’s when your motorcycle is safely all the way in. You stay firmly seated on the motorcycle, keeping it standing straight up. The fork tines of the fork truck slide through two tubes on the top of the frame. They lift you up high enough to move the frame with you and your motorcycle out the dock door. Scary…The tires of the fork truck are almost on the edge of the dock. Then you are lowered to the ground. Once the frame is setting soundly on the ground you back your motorcycle out. The frame is then lifted up and returned to cargo terminal floor somewhere. I took a couple of pictures of the operation, but didn’t get any showing the lifting frame. Darn it. 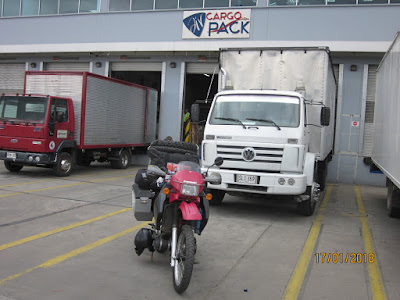 When I started my motorcycle to drive it into the frame everybody was standing around wanting to hear what it sounded like. When it ran like a purring kitten everybody walked away. Once I got it away from the building out of the way of all the activity around the terminal, I fired up Blanche. I typed in the Marriott Hotel GPS coordinates. She took them without rebelling. I walked back and said goodbye to everybody and took off. I drove carefully through the air cargo lot: lots of trucks big and small hauling cargo. You also can’t get out of the gates without security letting you out. The two security women (young) asked me something or wanted my passport. Of course I didn’t understand a word they said. Then they started laughing, about what I’m not sure. Finally, I took out my passport and showed it to them. Then they burst out in hysterical laughter and gave my passport back. I asked if I could leave and they told me to go ahead. They were still laughing as I drove off.

Heading back to the hotel, I noticed Blanche wasn’t acting correctly. I pulled over to the side of the road and rebooted the GPS coordinates and then she started showing the directions to follow. She showed me the correct roundabout to take to get back to the hotel. So I’m pretty confident Blanche will work ok in South America. I get back to the hotel and stop near the door to unload my bags.  Instantly, Security was all over me about where I parked. I had to get somebody to tell them I was just taking off my bags to take them to my room. I told them I would be finished in 20 minutes. Just then one of the kitchen staff looked out the window and saw my motorcycle. He just couldn’t see enough of it. Well, I needed a cart to haul all my bags. Somebody found one and brought it to my motorcycle and then offered to help unload my motorcycle. I had to unlock all my padlocks to get my bags off the motorcycle. It was in the reverse order I put them on. I piled everything up on the truck and off to the room my helper and I went. He carried everything into my room except a few items. He left, taking the truck with him. I was so caught up getting my stuff off my motorcycle that I didn’t see that he was Security. So, all the while I was unloading my motorcycle he was checking me out. I went down and pulled some more stuff out of my top box. I brought it up to the room and finally was done unloading my motorcycle.

I went back down to park my motorcycle in a place that would make Security happy. I headed toward the parking lot and they directed me down underneath the hotel. I had to get my blue room card out so the gate would open. I got to the first level and start parking. The next thing I knew somebody was hollering at me. Basically, he said I couldn’t park here. He said to follow him. He directed me down two more floors to the basement. I was now three floors below the hotel. They had a roped off area for motorcycle parking. I then saw a sign that said motorcycle parking for the Marriott Hotel and I parked there. He came over there and told me I can’t park there either. I pulled out my card and showed him my Marriott room card. He then said it was ok to park in the hotel parking area. Once I had my bike parked and covered he took me to an elevator that lifted us to ground level. As of right now I’m not sure I can find that elevator. I can walk down 3 levels to get to my motorcycle. That thing is buried so deep I don’t think anybody could steal it. Well that was enough motorcycle stuff for today. I started working on this blog after all of the above and fell asleep by 7:00 p.m.
Posted by Beauty at 12:53 PM