16 January 2018 – I rose, got dressed, and ate some breakfast before departing for the Tocumen International Airport at 7:30 a.m. Leanardo drove me again and on the way, he told me Tocumen was a very famous chief and Tocumen International Airport was named after him. Other than that, I don’t know any more about the guy. I gave Leanardo two of my blog cards so if he wanted to look at the pictures I took, he could. He dropped me off and we shook hands goodbye. 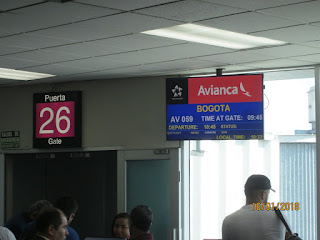 I walked up to Avianca Airlines check-in counter and handed the lady my ticket. She processed it along with my passport. Everything was going smoothly until she asked me if I had a return ticket. I said no. She had to get some advice from a co-worker about how to handle my situation. Her co-worker asked me if I had any credit cards and I showed her my two cards. That was acceptable to her so she finished processing my ticket. Columbia doesn’t allow any one-way tickets into the country. They want to know they can put you on a return flight to wherever you came from. I walked up to Security and started emptying out my many pockets in my Aerostitch jacket. I had four bins full of my stuff. It all passed through the scanner ok. I walked through the archway and no alarms went off. I was glad of that. I quickly put all my pocket stuff back in their appropriate pockets and got out of there.

I hiked it down to my gate and it was full of people leaving on an earlier flight. My flight didn’t leave until 10:45 a.m. and I had some spare time so I found a chair in another gate that was free of people. The only thing I have to say about me waiting for two-plus hours is about the gate attendant.  I am not kidding you about this; she talked for two hours straight. The only time she came up for air was when someone asked her a question. She was talking to a co-worker. I could hear every word she was speaking and wished I could have understood the conversation. 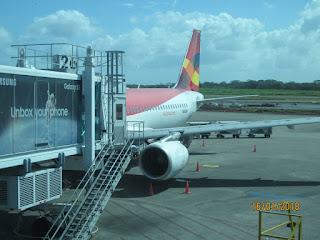 Eventually, my gate started loading and I was about the 20th person to get on the plane. I found my seat and stashed my helmet, motorcycle paperwork and laptop in the upper compartment. I was ready to get going. People kept filing in and my row of seats remained empty until about 5 minutes before they closed the boarding door. A woman came in, took her seat by the window and went to sleep. She never moved until it was time to dis-embark. Midway through the flight, the flight attendants started passing out customs forms. I took one and it was all in Spanish so I asked the flight attendant if they had one in English. He said they did, and went and got it for me. I filled it out in during the flight so I was ready for Customs when we landed.

One noteworthy situation during my otherwise uneventful flight was a mother who came into the airplane with her three children and Grandpa and Grandma. The instant the mother sat down the baby started crying. Nothing slowed down the crying. Mid-flight, Grandpa came up to console the baby and the crying got louder. Then Grandma came up and took the baby. The crying moved to about seven rows behind me. All the toys, consoling and pats didn’t quiet this baby. You know if that was in the U.S. that mother would have been hiding in the lavatory trying to muffIe that baby. All the well-meaning people around the baby would have been having a fit. I was among the first 20 people to leave the aircraft and escape from the baby. You know, that was two straight hours of crying and no one on the plane got upset about it either. Very impressive.

So, I was off to immigration. All the signs were in English and Spanish, so no problems finding immigration. It wasn’t real clear to me which line I should be in so I stood in the first line I came to. Each one of these two lines had at least 200 people and I didn’t know which was the right line for me. After about 20 minutes I changed lines and stood in the other line. The three guys in front of me were English speaking so I asked them how to know which line I should be in? Well they were shocked I spoke with them and one the guys said they were in a connecting flight line or departing line. Uh-oh, that clicked a light on in my head and I looked at little closer at the sign, and sure enough it said DEPARTING. I looked at the other sign and it said, IMMIGRATING. I started out in the correct line, then I changed to the incorrect line, so I had to change back to the other line again. Well, that little goof up cost me another 45 minutes in Immigration. The line trickled on slowly and I eventually got my passport stamped.

Thinking I was all done with Customs and Immigration, I exited the room. One of my first priorities was to purchase $200 USD in Columbian Pesos, and then to sit down and take a break after my ordeal. I ate an apple and a candy bar. While I was eating my apple I happened to glance down the airport hallway toward the exit sign. To my surprise, there was Customs waiting for me. So I dug out the customs form I filled out earlier. I gave them my passport and the form. They glanced at the form and put it in a pile and gave back my passport. She pointed to the x-ray machines and I headed in that direction. My laptop, my helmet and motorcycle paperwork were scanned. Everything came out clean and I actually was through Columbian Customs and Immigration now.

I walked out into a waiting area and found a chair. I needed to find the address of the Air Cargo Pack Terminal and take a taxi to it. I knew it was near but I didn’t know how close. I did get a taxi, and he takes me to a gate which he can’t get in to. He asked at the gate how I could get in and get to Air Cargo Pack to pick up my motorcycle. Well, the Gate Guard said, he needs to see a passport and I had to have my picture taken. At the same time an Air Cargo Pack delivery truck was coming through the gate. He caught wind of me and said he could give me a ride to the terminal. When the guard was finished with me, they let me through the gate and I jumped into truck and the driver dropped me off at Air Cargo Pack Office / Officina.

Once there, someone gave me an escort to the office. It was on the 2nd floor. I was introduced to the office staff and offered a glass of water. I presented my paperwork to them, which they worked on once they completed their more pressing issues. Within 30 minutes everything was ready for Customs in another building. Carlos and I hiked over there. I had to be specially cleared to enter the building, and Carlos had a pass. The room was full of people. Everyone who came in had to sign a log book and then request a certain type of help. My helper was handling all of that. I was just there to sign paperwork. We took our chairs among the mass of people waiting their turn. I know we were in Customs by 3:00 p.m. It was about 5:00 p.m. by the time they started my paperwork. It took 20 to 30 minutes to complete it and then I had to sign all the copies of it. Carlos’s wife called and asked what the hold up was, and when he was going to be home. Even though I didn’t understand the words he was saying, a guy recognizes those telephone calls from a mile away. 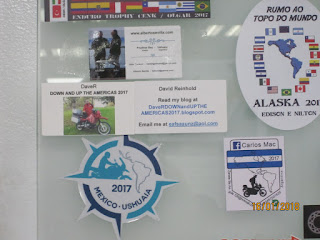 These are cards and stickers from others who have shipped their motorcycles using Air Cargo Pack.  I added my blog card to the wall.  I also found my Brazilian friend's sticker there. 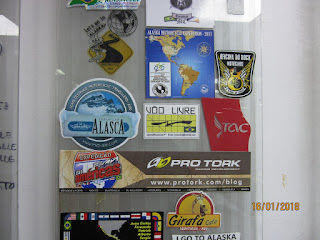 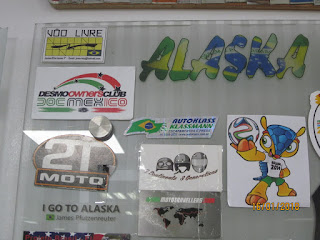 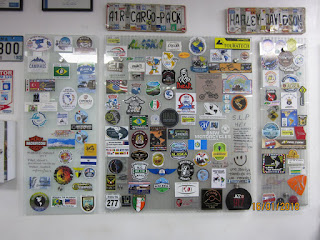 By the time we left Customs it was dusk and a light rain was falling. I placed the paperwork in my plastic bags to keep it dry and wore my helmet on my head. This rain is not making me happy. We got back to Air Cargo Pack’s office and put the finishing touches on my paperwork. Carlos left for home. He had worked past his shift. The lady processing my paperwork (bless her soul) also worked past her shift to get my paperwork finished. By this time, it was dark and I wasn’t going to drive in the dark where I can’t see pot holes and don’t know where I am going. I asked where can I find a taxi and they said, you can walk. I said it was too far to walk. I told the office staff, its dark, I’ve been in Bogota for six hours, I don’t speak Spanish, I don’t read Spanish, I don’t understand Spanish, I don’t ride my motorcycle in the dark and I don’t know the roads. What do I do if I get lost? They basically told me I was a big wuss. The office lady said she would show me to my hotel. All the guys were snickering that I had to be shown to my hotel by a woman. I didn’t know at the time that it would be a two mile walk or I would have taken a taxi. My laptop and motorcycle paperwork weigh at least 10 Lbs. / 4.5 Kgs. My arms felt like they were 2 Inches / 51 mm longer after the walk, but we got there.

We arrived at the Marriott Hotel about 7:00 p.m. I checked into the hotel with my reservation and everything went fine. I asked the reception lady if the Courtesy Shuttle could drop me off at Air Cargo Pack by the airport in the morning. She said it leaves for the airport every hour on the hour and should be no problem dropping me off. So, I took my helmet, laptop, motorcycle paperwork and tooth brush to my room and went to bed.  It felt strange not making multiple trips to carry all my bags up to my room.
Posted by Beauty at 10:05 AM