29 December 2017 – The hotel served me well, so I ate breakfast and paid for another day. I had to sweep the clouds out my brain because I haven’t written anything in my blog since Christmas Day. I got out my maps to look at and see where I was on each day. Then tried to remember everything that happened and how it happened.

About 2:00 p.m. I decided it was time for a trip to the ATM if I was going to pay for another day tomorrow. I asked the receptionist where an ATM was located. She told me the Esteli Center. It’s the same center Burger King is located in. It has two banks and each bank has its own ATM. For a while there I was having problems with my VISA Debit Card. It wouldn’t work. I had Mary check on why it wouldn’t. She was told, I was the only one who could call VISA and get the block taken off it. So, I’m in San Marcos de Colon, Honduras and have to call up VISA. I tried the International Telephone and it only spoke in Spanish. So, I tried the 1-800 000-0000 number. I dialed it and a guy answered it in English. He said there was no block on the card. I said there might be a problem with the password because Mary had tried to check my balance before and changed the password when she couldn’t read the one that I left her. We went through that and got that straightened out. I also told him all the countries that card is going to be used in. Anyway, the card should work now.

I tried it today and wham-o! the card worked. Mary instantly texted me to asked if I used my debit card. I said yes, and it worked flawlessly. Much to my surprise this ATM had the option of purchasing American Dollars. So, I purchased $100 Dollars in $20 Dollar bills. Before I went in the bank I was given the weapons search and then allowed into the bank. I eventually got through the line and met with a bank teller. I asked her if she could give me 20 ea. $5 Dollar bills for the 5 ea. $20 Dollar Bills. I was given a scowl of a look and she took the $100 Dollars. She handled the money like there was something wrong with it. Like maybe somebody pooped on it. She ended up making the change and I thanked her. It always makes me laugh when I see people so put out just to do their job. It’s kind of like going out and meeting girls. So, you say hi to a girl you would like to meet and you get this look back. How dare you even speak to me? That’s the way she came across. Well anyway, I needed the smaller denominations to pay my helpers when I cross borders. That green currency seems to grease the palms more gracefully and put bigger smiles on faces than other currencies. 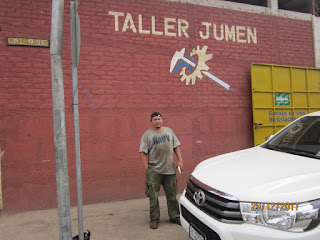 I was out by my motorcycle and I saw a large sign painted on the door of the building next to Burger King.  It said “Vernier Calipers / Taller”.  Taller in Spanish translates into workshop, and Vernier calipers are machinist measuring tools. Being a retired machinist, I walked over just to stick my nose in the door and see if they would invite me in. I used my translator and told them I worked for 37 years as a machinist. I pulled out some pictures and showed the father and son some of the work I use to do. The son spoke pretty good English and we were able communicate. He invited me in to look at their shop. From what I could see, they ran mostly manual lathes and some small Bridgeport Series 1 Vertical Mills. Their largest lathe looks like it had a 15.0” Chuck and about a 10 foot bed. I believe they were a repair facility for the town and whatever farming was done in the area. I saw they were turning brake drums so they did truck / automotive work also. I gave them my blog and e-mail addresses. It was great to talk with them. I came back to hotel to continue working on my block. I worked on it until 1:30 a.m. in the morning. I had a lot to say.
Posted by Beauty at 10:36 AM