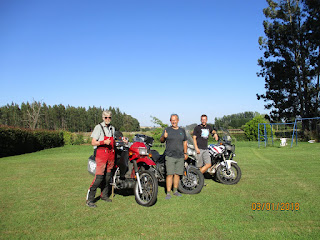 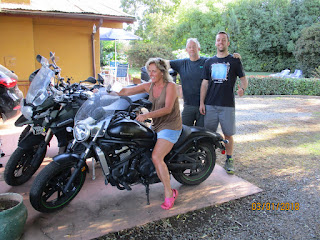 2 March 2018 – Today I drove from Los Angeles, Chile to Pucon, Chile. I got rolling by 10 a.m. I stopped for gas near Temuco, Chile. As I was filling up with gas at the Copec gas station, a man walked up and started talking to me in English. He saw the different countries I had traveled through on my saddle bags / panniers and came over to ask me about them. There was heavy traffic through the gas station, which made it difficult to talk. Ari realized as did I we were slowing down business by being in the way. I think we moved out of the way one final time and I asked him if he knew of somewhere I could change my engine oil. I told him I had the oil and the tools to do the work myself. He thought for a second or two then offered to let me change my motorcycle engine oil at his farm.  I followed him back to his farm. It was about 5 Miles / 8 Kilometers away from the gas station. I met his wife Rosy and his son Nicolas. He is a sheep farmer after retiring from the retail business. 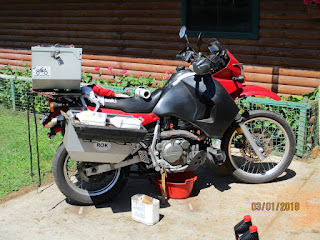 I removed all the bags and tires from my bike, got my tools and changed my oil. Ari provided me with a drain pan, some shop towels and place to throw my trash. I just completed my oil change and Nicolas came over asked me to come over and eat. It’s been a long time since I sat down and actually ate a meal with anybody. I don’t know for sure who cooked, or what kind of food it was, but it all tasted really good. I found out Chilean beef is now better than Argentine beef. 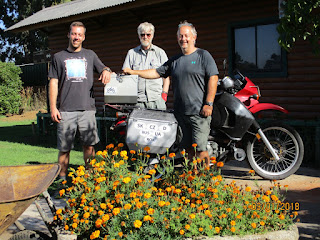 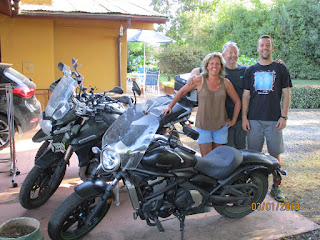 The talk mostly revolved around motorcycles and motorcycles travels. We also talked about families and some work related subjects. Then I found out Rosy is quite the fishing person. They had entered in a fishing competition and were excited about getting going. We had more than one Kodak Moment with everyone and their motorcycle. I am extremely thankful for the Insurance / Seguro help Ari and Nicolas researched for me and where to find the insurance. I really needed that help. I left at 5:30 p.m. and arrived in Pucon about 7:30 / 8:00 p.m.


The first hostel I tried was booked up and the receptionist said the hostel across the street had an open cabin if I was interested. I walked over and checked out the cabin. It was perfect and not overly expensive.  The young receptionist could speak exceptionally good English. So, before he left I asked him where I could find Argentine Insurance / Seguro. He asked around and told me the name of the store where I could find it. That made my night. This hostel was right downtown near the ATM’s and Super Mercados. I paid for two days.


I tried to send a SPOT to Mary but I was too closed in for SPOT to find a satellite. After I got my bags and everything in the room I walked to a park with more open sky. I put SPOT down and in less than two minutes SPOT sent my location to Mary. I walked back to the hostel and put spot away. Then I walked across the street to the Mercado and bought myself a liter of ice cream. That went down really smooth. I went to bed.
Posted by Beauty at 7:53 AM