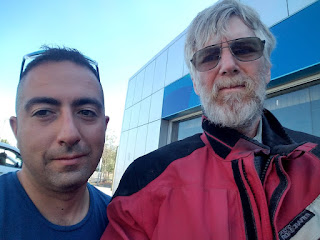 28 February 2018 – Guess what? I slept through the alarm and now it’s 7:30 a.m. Smooth move, Slick. I went up to the 18th floor to prove out Blanche’s routes because I needed satellites for that. Everything looked good. I tried sending a Spot Message but Spot couldn’t find a satellite if her life depended on it. I went back to my room and finished packing. I will be leaving Santiago today, continuing south to a greener countryside. I didn’t leave the hotel until after 10:30 a.m. and didn’t clear Santiago and the suburbs until after 12:00. Santiago is really a big city. You know I didn’t make one wrong turn leaving the city and that included stopping for gas. That’s funny because when I entered the city I made all kinds of wrong turns which can be very frustrating and time consuming.


Anyway, the day was a bright sun shiny day and every mile / kilometer I went south the greener the scenery was getting. I could swear I saw poplar trees and a white pine. The pine tree could have been similar to the Black Hills pines which kind of have a black trunk. I’m not sure how factual my observations are, but the trees sure reminded me of the trees when I was growing up on the farm. Another thing that is showing up more and more are green lawns. That’s a nice touch that I haven’t seen in a long time.


I never ate breakfast before I left this morning and I was starting to get hungry. I had driven 250 Miles / 400 Kilometers and decided to get gas and something to eat. I paid for my gas and went inside to see what was on the menu. They had hamburgers and french fries. They also had what looked like hamburgers, but instead of meat / hamburger they substituted chicken with guacamole. I ordered it and everything tasted fine. I cleaned up and threw my trash away and walked outside to my motorcycle. 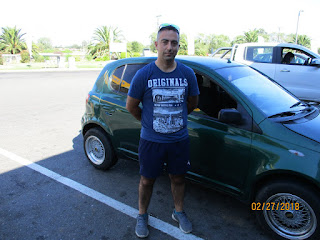 I was giving it the 50 cent look over when a guy asked me about the stickers I have on the sides of my panniers / saddle bags. I showed him both sides and explained that I rode around the world in 2009.  (DaveRrtw2009.blogspot.com) He couldn’t believe it. He went over to his car and got out his fanny pack. He dug through it and pulled out his name tag off his police uniform. It was OD green with his name written on it. He is a member of the Carabineros de Chile Police Force. This particular Police Force has a history going back to 1927. I was truly glad to meet Mr. Herrera and have my picture taken with him. I gave him one of my blog cards and we parted ways. His family was inside the restaurant wondering who their dad was talking with. 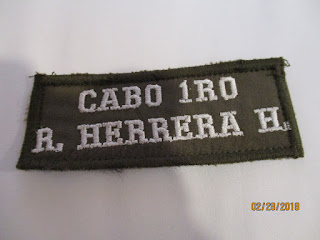 I typed in the first hotel I wanted to stay at and Blanche guided me on my way. As I was driving there Mr. Herrera passed me and waved as he went by. I waved back. I went through the traffic roundabout and Blanche was right on target. I had to ring the bell at the gate to be let in. I was worried that this hotel was going to be very expensive. It turns out the price of the hotel was only moderately expensive, which I could live with.


I got checked in ok and the rooms were really nice. The reception lady demonstrated how everything worked and left. I brought my motorcycle around to the room and parked. No 5th floor parking ramp here. I unloaded my usual bags. My Snickers candy bars were all liquid chocolate. I set them in front of the air conditioner until morning. I got all my electrical devices plugged in, the wi-fi passwords typed in and I was ready to explore my destinations for tomorrow. I worked on that till about 10:00 p.m. and was about to go to bed when Mary called. Well I didn’t make it to bed till after 11:00 p.m. That’s not a good sign for tomorrow.
Posted by Beauty at 7:41 AM