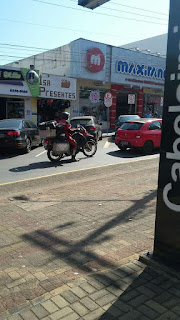 28 April 2018 – I got up and went downstairs to eat breakfast. The hotel served an excellent breakfast and again the hotel staff was very friendly and helpful. I took my time loading my motorcycle as it was still early. I told James Jr. I wouldn’t arrive till 12:00 / 12:30 p.m. today and I only had to drive 16 Miles / 26 Kilometers to get to Telemaco Borba. I left about 10:30 / 11:00 a.m. with plenty of time to get to Telemaco Borba. As fate would have it, Hwy 160 / PR-239 had road construction on it which included stop and go traffic most of the way to Telemaco Borba. No joy here. I picked my way thru the road construction and eventually arrived at the outskirts of the city. I selected the route in my Gps to James Sr.’s store and then set off to find it. As I neared the street the traffic became more congested and when I turned on to Avenida Horacio Klabin, the traffic stopped. It was a busy Saturday in downtown Telemaco Borba. While I was waiting for the traffic to start moving again someone took my picture.    Whoever took the picture texted it to his friends and asked if anyone knew who I was. They could see I was traveling by the tires loaded on my motorcycle. James Jr. received the texted before I arrived at the store. The traffic started moving again and I found a parking spot I could squeeze into near the store. It was on uneven ground which I hate but I was able to get the kickstand down. I also put my two extra wood supports under it to kept it from falling over to the right.

I walked down the street maybe 50 yards / 50 meters to James Sr.’s store. Before I arrived, James Jr. saw me. It was good to see him. We shook hands and laughed that I had finally arrived in Telemaco Borba. I told him it was a long ride. I could also tell he had lost some weight since I saw him in 2016 in Sturgis, South Dakota. He asked me where I parked my motorcycle. I told him. He said it was illegally parked and I may have problems with the parking police. They patrolled the sidewalks daily looking for violators. He said because it was Saturday, I probably wouldn’t have a problem but you never know. 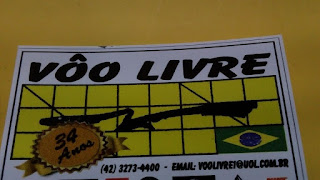 James Jr. invited me into their store. The name is “Voo Livre” / Fly Free.    It’s a clothing and shoe store. We talked more about my travels and I then met James Jr.’s Uncle Sandro. He was an uncle on his mother’s side of the family. He also introduced me to some of his Dad’s friends. We talked some more about my travels. Later James Jr. suggested we eat dinner and asked if it was ok if we ate at a buffet near downtown. I said, no problem. James Jr. secured the store and we collected our motorcycles. 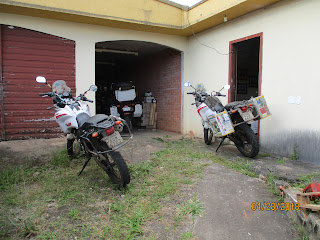 We rode over to the buffet and ate. It was a long time since I was able to eat my fill of food. When we finished eating, we rode our motorcycles back to James Sr. and Elis’s home. I parked my motorcycle in the entryway into their home.    James Jr. showed me into their home and where my bedroom was. I unloaded my motorcycle and then sat down and took a break. Later on, James Jr. asked me if I would like to eat dinner / brunch at his dad country club. I said yes. He said we would have to leave before by 11:00 a.m. I said ok. So that was the plan for tomorrow. 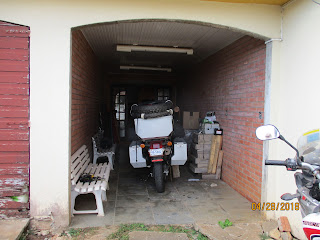