Crossing From Argentina into Brazil - 20 April 2018

20 April 2018 – I was up early this morning because I wanted to eat the free breakfast at the hostel. I rose so early that the breakfast wasn't prepared yet. So I gathered all my stuff together, got my paper work in order for crossing the border, and started to load my motorcycle. This will be the last country in South America I will be crossing into. If everything works out, I will fly out and ship my motorcycle back to the United States from Brazil. Well that’s the plan anyway. I see the hotel staff milling around the breakfast area meaning preparations are complete and you can come and eat. I hurried in and picked through their toast, fried eggs, fruit and dry cereal etc. I usually eat two or three serving of dry cereal. Kind of trying to fill myself up. I finished up there, made sure everything was out of my room, returned my key, got my coat on, got my GPS on the right route and said good-bye to the hostel employee. He loved the thought of traveling by motorcycle.

The entrance into the hostel is blocked with two steel vertical posts to keep the cars out. The side walk went through the middle of these two posts and my motorcycle barely squeezed through. There was about 1.0” inch / 26 millimeters on each side of my saddle bags and the posts. I squeaked through the posts and out onto the street successfully. I double checked that Blanche, my GPS, was following the route I planned. She was on track and off we went to the Brazil border. I had to find Hwy 12 to the Argentina Aduana and then onto Brazil’s Custom and Immigration.

I arrived at Argentina’s Aduana in less than 15 minutes which shocked me. I thought it would take longer. Argentina processed me out of their country so fast I was afraid I missed a step or something. I remembered asking several times if all the processing out was complete and always yes, yes, / si, si. I got on my bike and drove slowly out of the Aduana / Customs and Immigration area. I was expecting an employee or Customs Official to ask me for some customs or immigration form which I didn’t have and then get redirected back to go through the process again. Well, that didn’t happen.
I continued on Hwy 12 till it crossed Rio Iguazu’ River which then turned into Brazil Hwy 469. I continued to follow the highway till I stopped in Brazil’s Alfandega e Inigracao / Brazil’s Customs and Immigration. I parked under the roof in a spot that was open. No one walked up to help and all the people were in offices. Scary, which office do I pick? A woman walked out of an office and I spoke in English to her and she spoke back to me in English to me. Good English too. I felt lucky and she told me she wasn’t part of Brazil’s Alfandega e inigracao / Brazil’s Customs and Immigration. She was preforming some kind of study involving that border crossing. I am not clear on the area of study. However, she walked around with me till we found the correct customs official to help me. He was there, but only after we checked several offices did we finally find him. I thanked her for her help and the guy proceeded to get started processing myself and my motorcycle into Brazil. It might not have been his day but he had problems with forms and he hated to wear glasses. I understood that, and we laughed together about the glasses. He asked that I check all the forms for correctness and I found a few mistakes which I corrected. All and all, I was out of customs and immigration within an hour. Technically that wasn’t bad. I gathered up all my paper work and put it in my top box. A couple of guys came from customs and immigration and talked to me about my travels. They also commented how much they liked my motorcycle. 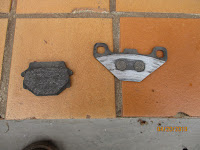 So, I was off to seek my fortune in Brazil. I was going to stop and get some water or food at a gas station and when I stepped on the brakes all I heard was metal on metal scraping and grinding away. I couldn’t get my foot off that brake pedal fast enough. The longer it rubbed the more damage to the rotor. The softer metal of the steel brake backing pad would weld itself to the harder disc rotor. I quickly pulled into a vacant parking lot and stopped. I was pondering my situation and where I could repair / replace my brake rotor pads. I looked up and, lo and behold, I saw a Shell gas station about 100 yards / 100 meters away. I decided if I needed help that would be the best chances of finding it. 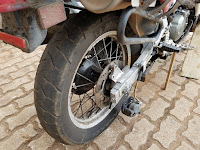 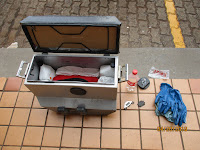 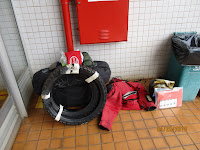 I entered the gas station and parked near one of the shops that sold car and motorcycle insurance. The gas station had a small strip mall attached to it. It had two levels: the top level which faced the gas pumps and the lower level on the backside which you enter the shops from the other side of the building. Directly behind my motorcycle was a staircase which went down to the lower level on the backside of the building. It had an extended roof out over the stairs and side walk in case it rained out. It was perfect for me to change my worn out brake pads. I backed up against the curb and parked my bike. I blocked it up nice and secure to prevent it from falling over while I worked on it. First, I checked my water supply because I might be here a while. I shed my coat and started to unload my bike. Everything I took off my motorcycle I put under the roof. That included my helmet, coat, spare tires, my bags off the seat and my right saddle bag. 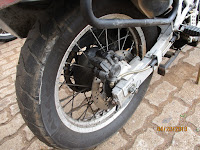 Everything I needed to change my brake disk rotor pads was in my right saddle bag which meant I wouldn’t have to dig in my left saddle bag. I started digging in my right saddle bag and it looked like an explosion took place. The people who walked in and out of the mall thought I had a major problem with my bike. It was just everything strewn around. Actually, there was order, but only I understood it. Several people stopped by to tell me if I needed tools I could borrow some from the Shell station. By and by my buddy showed up. 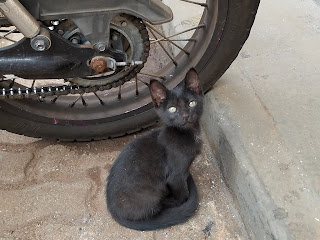 She was a skinny young black cat. I wanted to give her some food but I had none and felt bad about it. She came and went during the couple of hours I was there. She was a professional moocher and had it perfected. Most people just petted her but mostly she ate the scraps out of the trash cans and off the ground. Anyway, changing the brake pads were pretty straight forward. The most difficult part of it all was cleaning all the dirt and grime out of the disk caliper. I assembled everything and blue Loctited all the nuts and  bolts in place. 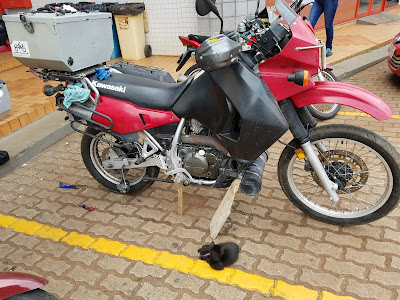 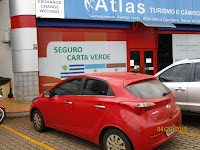 During my brake pad replacement, a gentleman from the next door insurance agency stopped by to look at my motorcycle. We talked some about my travels and I asked him whether he sold motorcycle insurance. He said he did. I told him I would come talk to him when I finished with my motorcycle. He said “all right”, and left. He was a buddy of the skinny black cat too. 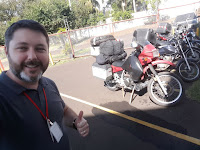 I was bummed. I had another agency I was going to check with about insurance. He then called around and asked friends he knew if they knew where I could insure my motorcycle. All his contacts came back saying the same thing. You cannot insure an out of country motorcycle or car in Brazil. I asked him to call one more insurance company for me. I found this agency on the internet. He called and spoke with their representative and got the same reply. In fact, the representative told me in English that if your vehicle motorcycle / car / truck is from outside of Brazil it can’t be insured in Brazil. After all the calling this man did for me and every return reply was “no” I dropped the issue of having motorcycle insurance in Brazil. I resolved myself to the fact that if my motorcycle was stolen it will be gone and everything lost forever. No compensation for anything.

I had my motorcycle all put back together and Luiz invited me down to his office to meet his IT staff. 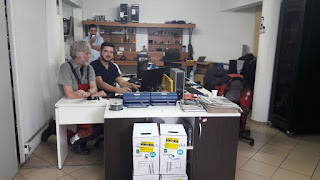 They were really interested in meeting me. He told me to ride around the end of the building and park by his office. He would let me through the gate. I did and then went into his to meet his office staff. I believe Luiz has 4 men working for him and most of them ride motorcycles. We talked motorcycles and I shared some of my 1941 Harley-Davidson Knucklehead pictures with them. I also gave them my blog addresses if they would like to read about my travels. Luiz recommend we go out for dinner. So we all packed up and left for a nearby restaurant. 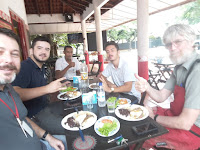 I ate Brazilian beef, potatoes and beans. It was a tasty meal for someone who has been living on Snickers candy bars, peanut butter and apples. When we finished we departed for the office again. We talked more motorcycle stuff and took some more pictures. 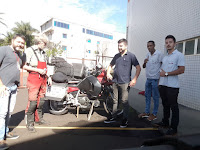 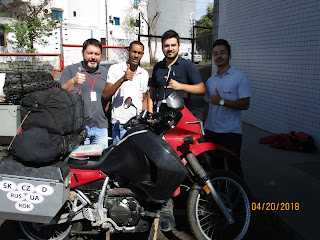 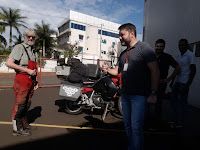 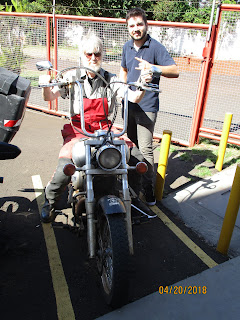 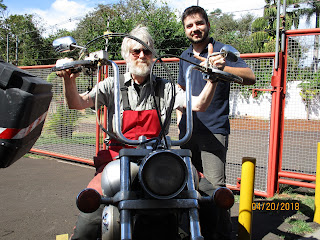 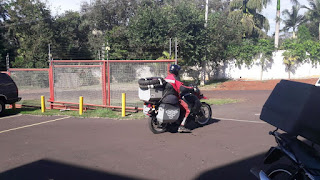 I gathered my stuff and prepared to leave, thanking everyone for being such great hosts.

Two of Luis' men agreed to guide me to my hotel deeper into the city. I asked them before we left that they drive slowly so as not to lose me. I was able to keep them in my sights and arrived at the hotel safely. I thanked them again for helping me out, shook hands and they left for their job. I went into the hotel and secured a room. I was able to park my motorcycle around the corner from the front door. The perfect place. It was still early in the afternoon but as always crossing borders into a new country, dealing with customs and immigration ratchets up the stress level. I just wanted to hide in my room. I ate in the hotel that night but for what it’s worth it wasn’t worth the price I paid for the food. So, went today.

Here are a few more pictures.  Carlos customized his bike into this chopper, and he and his girlfriend rode their motorcycles to Ushuaia in 2019.  He sent me these pictures. 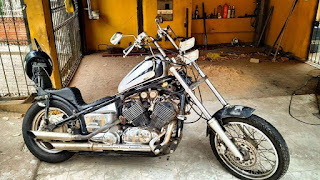 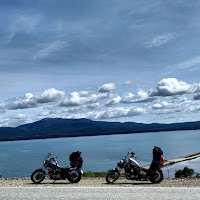 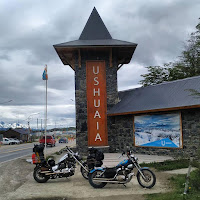 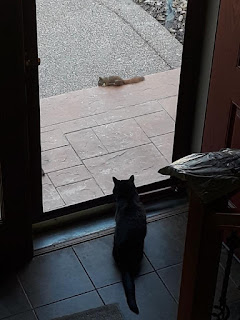 Here is my cat, Hiss, at home defending Mary against a red squirrel
Posted by Beauty at 10:52 AM