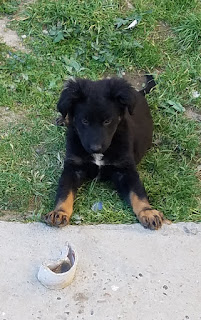 28 March 2018 I left Rio Gallegos, Argentina about 10:30 a.m., give or take a little. It was a nice day: very little wind and sunny. I pulled over in a panic. I thought I forgot and left my cell phone in the hotel. Whew, I did put it in my coat pocket. Hooray for habit. Before I leave I always check that I have my two wallets, passport and cell phone. Today I forgot to check that I had put my cell phone in my jacket. When I stopped there was a young lad looking at his motorcycle’s rear wheel. Whatever he was checking apparently, he fixed it or it went away by itself. He was riding a Honda 650cc bike very similar to my Kawasaki KLR 650 with a lot less baggage. His name was Immanuel and he was from New Brunswick, Canada. Imagine that. I’m sure he was under 30 years old. He asked if we could ride together. I said we can, but I ride 62 Mph / 100 Kph. So, we were off. I think he was a little unsure with whatever was going on with his motorcycle. Having company is always comforting in that situation.


We rode directly into rain. It wasn’t a heavy rain because I didn’t get wet inside my AeroStich riding suit. We stopped once and he put on more clothes. I was wishing I had put on my rain suit when it started raining. There was only one place out of the wind that would have worked because it had buildings to get out of the wind. The rain eventually slowly came to an end, and then bright blue sky with sun. Two areas on Hwy 3 had high wind warning signs. Believe me, the wind was blowing. The wind gusts were in the range of 40 to 50+ Mph / 65 to 80 Kph.


In one of those high wind areas I had to cross a bridge. The reason I had to slow down was because the approach to the bridge was all broken up. It was an area the width of the bridge and about 2 yards wide on each end. I slowed down to 20 Mph / 35 Kph. The roughness of broken up area and the high winds blowing across the bridge started my front wheel swiping back and forth violently, and I mean violently. Anything I tried to do to stop the handlebars from swiping back and forth only amplified the swiping. At the same time the wind was trying to blow me into the bridge railing. I was being beat up by the wind and front wheel swiping back and forth. It was just nuts. I knew for sure that wind was going to cause me to crash and I was hanging on for dear life. I was almost pitched off by the swiping of the handlebars. It was some real scary shit. The cars behind me want to pass but were scared because of all craziness with my motorcycle.


I eventually got off the bridge and Immanuel was there waiting. I wanted to take a second to regain my composure, but he was off. This all took place somewhere near Puerto Santa Cruz, Argentina. Thank God I made it through with only my nerves frayed. There was another part of the highway that was a high wind area. It was announced with yellow signs that had palm trees blown over at 60 degrees. They also have some flags on the side of the road showing the direction of the wind. These flags were shredded by the snapping in the wind. It was about a 5 Mile / 8 Kilometer length of Hwy. I slowed down to about 50 Mph / 80 Kph. That gives you some reaction time to adjust your motorcycle to the wind. I never slow down below 45 Mph / 72 Kph because your wheels act like gyro’s. Below 40 Mph / 65 Kph your wheels lose the gyro effect and you’re back at the mercy of the wind. You want the gyro effect. I rode through that area ok, but it was a constant reminder of the bridge crossing. 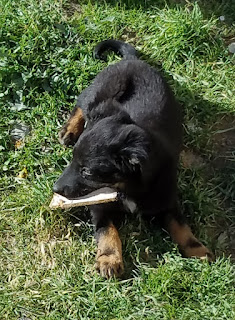 Immanuel and I stopped at the intersection where I turn into Puerto San Julian. He was going to gas up at YPF gas station, get something to eat and then continue on. I had enough for today. I was going to stay in my favorite cheap hotel, Hotel Argentina, for two reasons………It’s cheap and has good wi-fi. The receptionist recognized me and gave me the same room I had the first time I was here. One of the residents of the hotel is a black puppy who is just fun to play with. I don’t think the owner likes me playing with his hound. It’s his guard dog and me being his buddy is probably destroying all his training. The room is the same price; $25 Dollars / 500 Pesos. I got my motorcycle wedged in a corner where it won’t blow over and carried everything inside. I walked down to the YPF gas station and bought a sandwich for tonight’s supper. It wasn’t bad. I wasn’t in the mood for anything serious so I just watched TV and went to bed.
Posted by Beauty at 6:26 AM