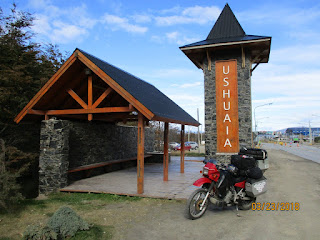 23 March 2018 – I ate breakfast and packed my motorcycle. I was leaving Ushuaia, Argentina. It was kind of a sad feeling. It took a lot of work and planning to get here and now I’m leaving. I filled up with gas which took a half hour. Gas lines……there were six cars in front of me. I put my rain suit on just in case of rain and also to keep warm. 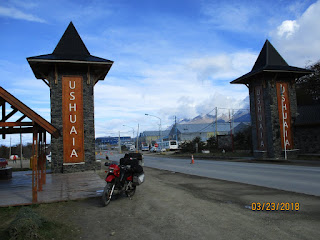 When I finally left the city limits I passed the Ushuaia signs announcing the city. I stopped and took some pictures. As I continued into the mountains I noticed that all the road construction I passed through on the way into the city was mostly completed. That kind of tells you how long I stayed in Ushuaia. I arrived on the 16th of March and departed today the 23rd of March. I stayed 7 nights in Ushuaia. The time went really fast.


I rode into some rain thru the mountains and I was very glad I had my rain suit on. I rode past the city of Rio Grande and crossed the border in to Chile. For whatever it’s worth……..I sure wished all the borders worked like that. Fast and simple. 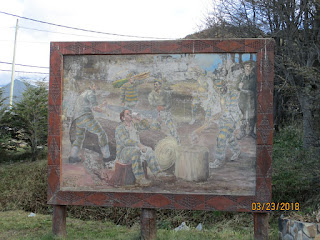 I then rode about 32 Kilometers of dirt road and stopped for the night in Cerro Sombrero. It was a very expensive hotel and their restaurant was equally as expensive. Besides pumping sunshine into the place I guess all their food has to be trucked in. It was a nice hotel. I can’t complain, but I didn’t need a key to get in and out of my locked door. Pull it closed and push it open. I know management knows about the problem and just figures the tourists are here for one night, complain, and are gone the next day. I watched a good show in English on TV. It’s been a long time since I did that. I could tell by the weather it was going to be a cold night. It was a clear sky with a bright crescent of a moon and already in the low 40’s. 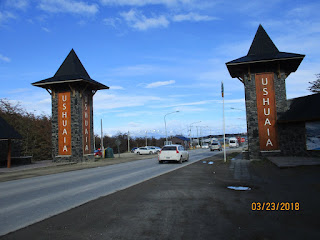