Blow Over - 31 March 2018 – I got up this morning and walked outside to see what the wind situation was like. I opened the door and it squeaked like usual and I was instantly attacked by my buddy the little hound. He knew when he heard the door squeak it was probably me. He wanted to play so I had to rough him up some so he would be happy. The weather was a calm beautiful sunny day. Just the way I like them. The temperature was probably 43 Fahrenheit / 6 Celsius degree. I backed my motorcycle out of the corner of the building where I had it parked. I had it parked in the corner so if it got windy it didn’t blow over. I noticed by my second trip out as I was loading my motorcycle the little hound was gone. He’s back inside with his owner. I always had the feeling he didn’t like me being a buddy to his future guard dog. I hated to tell the little fella he probably was going to have a hard life ahead of him. 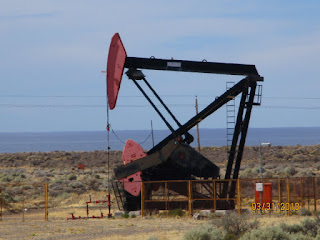 I returned the key, checked all my wallets and stuff and I’m off to the gas station for gas and drinking water. I will be leaving Puerto San Julian, Argentina and riding up to Comodoro Rivadavia, Argentina. The road was in good shape. With some worn down mountains and mostly flat land. Other than seeing all the likely suspects, skunks, birds of prey, rabbits, rheas and guanacos (llamas), it was mostly a boring day. This was rare of the guanacos. There was one standing in the middle of the road just looking. I was approaching while beeping my horn. For some reason they respond to my beeping horn and they run off in the direction they’re facing. This one particular guanacos did a slow 180 degree turn and walked back in the ditch. By doing the 180 degree turn I could have hit the darn thing. I was all over my brakes to slow down so I didn’t hit the critter. Like I said, when the guanacos hear my horn they start moving but this particular fella took his time. He / she may have had a death wish. The ditches are littered with dead guanacos. I saw one dead in the last 24 hours. It was the only one I saw like that.


As I passed thru Caleta Olivia I stopped in a bank and purchased some Pesos. The first ATM wouldn’t accept my credit card, or it was out of money. The 2nd one utterly refused the card and the 3rd one I hit pay dirt. I stayed in this town on the way down to Ushuaia. I didn’t care for Hotel Robert or just maybe their staff. I drove by the hotel as I continued on to Comodoro Rivadavia. The road from Caleta Olivia to Comodora Rivadavia was the most horrible black top road. It was all broken up and what wasn’t broken up was rutted up black top by the semi-trucks. If I owned a small car which there are many here like Fiat, Peugot and multitude of others etc. etc. I would be scared to drive these roads for fear of dragging or bouncing the bottom of my car off the raised center of those roads. The road or lane looks like a W. The center of the W is the highest part of the road. That’s the part you would scrap with your small car.


I stopped again once I arrived in Comodora Rivadavia to see if I could purchase more Pesos. It was the same bank, just a different town. It said I exceed the limit for the day. So, no more Pesos till tomorrow. I continued to drive thru town till I spotted a gas station. I stopped, filled up and bought a hamburger to eat. I continued on to the hostel. I rolled up on the hostel and it looked closed or out of business. There was one car setting alongside one end of the building and I decided to see if anybody was home. I knocked on the door and nobody answered. I saw a door bell button but it looked broken. I was about to leave and I said I’ll just push the doorbell once. I rang it and in a couple of seconds someone answered the door. I handed him my card which asked if he had a room for the night. He did. He took me in and showed me the room. It was small with 4 beds and no bathroom. Bunk beds and two single beds. It was crowded. The latrine was separate and shared with all the rest of the men in the hostel. The women also had a shared latrine together. I told him I would take it. $400 Pesos, a good deal with some inconvenience.


I rode my bike behind the Hostel and parked it. It was a bugger because all the ground was uneven. I got all my bags unloaded and I decided I was going to oil my chain on my bike. Because of the unevenness of the ground and the problem with the Patagonia Winds I decided to put it on the center stand. It took three of us to put that bike on the center stand. Remember, it now has 10 gallons / 38 litres of gas in the gas tank. Well we get the bike on the center stand. I put a board underneath the center stand so doesn’t sink into the dirt. There are no concrete pads around this hostel, it’s all gravel. I couldn’t turn the rear wheel so I put a short stick under the end of swing arm to get the wheel off the ground. I now can spin the wheel. I go to open my saddle bag / pannier with my chain oil in it. I get the lid half ways open and I feel my bike start moving. It rotated on the center stand and slid off the board it was setting on. The next thing I see is my bike crashing to the ground. It must have crashed loud enough because the owner of the hostel came out to see what was going on. We tried to lift the bike together and couldn’t budge it. He goes in to the hostel and gets the third guy again and three us get the motorcycle back on it wheels. I get my bike started and drive it off that spot. I drove it over to a shady spot with trees and tie the bloody thing to a tree so it wouldn’t fall over again if the winds came up during the night. I was fed up with the motorcycle for today and I never did oil my chain. I had that little blue cloud floating over my head again and there was no need to make it get any darker blue. I went in the hostel, planned out my next day, talked to Mary and went to bed.
Posted by Beauty at 1:30 PM