Mother Nature and a Bathroom Frozen in Time - 19 November 2017 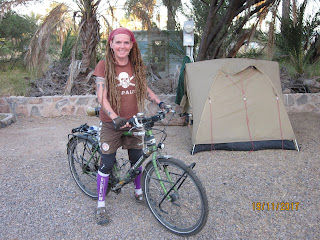 19 November 2017 – I was loading my motorcycle but before I left I wanted to get a picture of Carmen for my blog. I walked over to her tent to see if she was around. She was but needed a moment. I went back to loading my motorcycle. She appeared looking nice. So we were talking about traveling some more and one thing led to another and I mentioned I needed to send home some pictures for my blog. Carmen mentioned to me that the hotel has two WiFi systems. One for all the rooms to use which is weaker and the other for the hotel to use. A more powerful and faster internet. 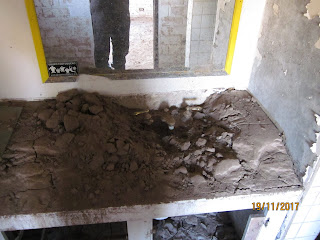 She told me how this hotel was flooded during a large storm or maybe a hurricane. I not sure which but anyway the rooms were flooded up to 3 feet / 1 meter and virtually put the hotel out of business. There were also homes or rental houses down by the beach that were flooded and destroyed by the storm. In one house the plumbing still worked. The toilet could be flushed and in the counter top sink the water faucets still worked. The counter top was covered with 4 inches / 10 centimeters of dirt. The toilet was buried in dirt and the water closet lid was covered with it. 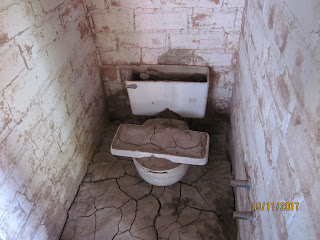 After seeing that I went and tried out the more powerful and faster WiFi system. I tried sending first one picture and then two pictures. The two picture seemed to have trouble sending so I sent one picture at a time till all my blog pictures were sent. This took almost all afternoon and just before I finished my computer battery ran out. I went back to my room charged up the battery and finished sending the rest of the pictures. That was a task I was glad to have completed. I still had to finish writing my blog for 19 November and get it sent. Then I will be ready to leave with all my chores caught up. Going to bed will be much sweeter knowing this Word document sent. Mary is uploading my blog posts and pictures to save me on data costs.