22 November 2017 – I woke about 7:00 a.m. I decided I needed to incorporate some exercises into my daily routine. Getting up, sitting on my motorcycle in one position all day, then going to bed and repeating the routine the next day can’t be too healthy. So, I did some stretching and some of those high school gym class exercises. Something to get my body moving. I did that, loaded up my bike and took off. I was in serious need of breakfast and ate in the same place as I ate supper last night. I ate the same food and drank a liter of water. I really needed the water. 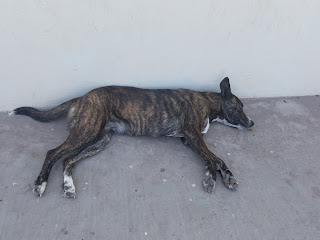 I left the outdoor restaurant and drove out of town. I just get to the outskirts of the city, and traffic is stopped dead. I stopped for a moment or two and I see these Americans up front. I drive up the shoulder and asked them if they knew what the traffic hold up was. They said they didn’t know, but thought it was some kind of an accident. I decided to ride up a little further to check it out and was stopped by the police. They said no going past this point. I asked them if I could go to the gas station 100yds / 100 meters away, and they said, yes. I drove up to the gas station and got off my bike. I went inside and bought two liters of water and two Snickers bars. The traffic holdup looks like it might not move for hours. I wanted to be prepared for a lot of sitting in the sun. I looked up and saw an open parking spot alongside the building. I pulled over there and parked. I filled up all my empty water bottles and drank whatever was left over. I ditched my jacket and pulled out my Spanish pamphlet. I tried refreshing myself on whatever I learned last winter. Then my buddy showed up looking for a handout. I didn’t have a thing to give her but pets. She left and laid down behind me on the cool concrete. I continued looking thru my Spanish pamphlet and then an ambulance drove by heading to the accident scene. Then four Kawasaki KLR650 riders pulled in and filled up with gas. I thought maybe they would hang around a bit but they took off heading toward the accident. I thought maybe they would be turned back but I never saw them again.

About a half hour later, a second ambulance drove past heading toward the accident scene. As I continued to read my Spanish pamphlet, two pickups pulled up and a group of guys got out. They didn’t say much but were just milling about. We finally said a few words to each other and then they started asking questions about my motorcycle. I told them of my travels around the world. They were quite impressed with that and that I did it on that kind of a motorcycle.  (For those of you who are not familiar with my trip around the world, check out my blog: DaveRRTW2009.blogspot.com). They were traveling to Cabo San Lucas in a two-week travel time frame and have done it for 15 years. Apparently, things weren’t flowing as smoothly as they had hoped and they were behind schedule. Now this highway shutdown was just another glitch in their plans and the lads weren’t happy. They were at a point where they had to make a decision to keep on going or turn around. I know they all wanted to go to Cabo San Lucas. So, I’m guessing they will drive thru the night to try to make up time, stay maybe one day, and turn and burn. A thousand miles is not that far but when you’re driving winding twisting roads and your speed drops down frequently to 40 mph / 65 Kph you’re not making great time. In the U.S.A. I can easily drive a thousand miles in 2 days at 62 Mph / 100 Kph but not here in the Baja California.

The third ambulance just drove by. Whatever happened at the accident scene must not be good. I hung around the gas station for another half hour. By that time, it was after 2:00 p.m. I wanted to be past La Paz today but that will not happen if I start after 2:00 p.m. I don’t drive in the dark: it is too dangerous. So I drove back to same hotel I stayed in the night before. When I arrived, the office was locked. I walked around looking for someone and found the cleaning guy. I knew he couldn’t get a key for me so I adjusted the chain on my motorcycle. I just finished adjusting my chain and the receptionist drove in. She got out of her car and looked at me and said “what are you doing here?” I laughed and she went into the office. I gave her a few minutes to get settled in and then went in. She got out her cell phone translator and I told her about the accident south of town and that I waited 4 hours for the accident to clear at the PEMEX gas station. She said she had waited 2 hours for the accident to clear and then she left. She looked up the accident on the internet which said there was two cars and a semi-truck involved. The semi-truck was laying on its side. The internet said there were 4 or 5 individuals involved with injuries. To what extent, I don’t know. I told her I would like to stay another night. I filled out the paperwork and paid her. She then told me she would bring me supper if I wished. I said, really, yes please. I asked for my usual Huevos Rancheros and refried beans. 45 minutes later, she dropped off my supper and I paid her for it. I really didn’t do much today other than load my bike, unload my bike and adjust the chain. My supper was great and my stomach was happy.
Posted by Beauty at 11:51 AM