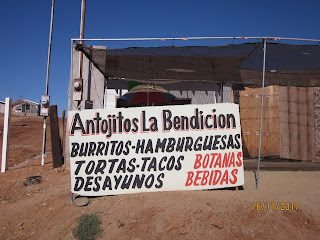 16 November 2017 – I woke to the 4:00 a.m. rooster. He crows ever day at 4:00 a.m. almost to the minute. It was too early to get up and too dark. I went back to bed and got up at 8:00 a.m. I got my bike loaded and the last thing I wanted to do was break a 100 Pesos note. There was a guy 12 or 13 years old and a girl 12 or 13 years old. I gave the guy the 100 Pesos note. He put it in the desk drawer thinking I was paying a bill or something. I tried to write on a notepad that 100 divided by 5 equals 5 ea. 20 Pesos notes. It went right over his head. He totally didn’t understand.  I forgot I had Google Translate again. Well, the cleaning lady went and got the guy that watches the office and he gave me 100 Pesos in change. I needed the small denominations to pay for breakfast. The roadside restaurant can’t handle 100 and 500 pesos notes.  That's $5-$25. I drive down to the restaurant and ask Laura, who runs the restaurant, to make me some breakfast. She made Huevos Rancheros with Frijoles Refritos. In English that's eggs over medium with salsa and refried beans. That was the best breakfast I’ve eaten since I entered Mexico. Laura and I were talking about my travels when these two well-dressed Mexican ladies stopped by to eat breakfast and talk. They were impressed with my travels. Laura was translating. I was putting on my riding jacket and one of the ladies asked if she could lift it. I handed it to her and slowly let her hold it. She quickly gave it back and said it was too heavy. I asked Laura if it would be ok if I took her picture and a picture of her restaurant for my blog. She said sure. So, I took pictures of her, her and Mexican ladies, and her restaurant sign. The two Mexican ladies were by themselves and drove down to Colonet from Mexicali, Mexico. These ladies were in their 60’s and driving a new Volkswagen Jetta. They were out on a adventure.  Kind of a Mexican Thelma and Louise, maybe?  Here's Laura; a nice lady. 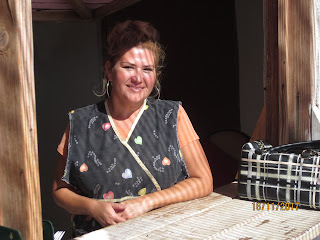 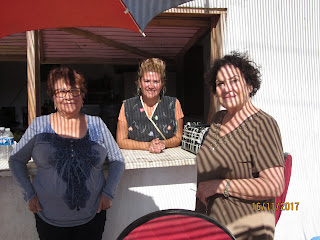 I got myself organized and headed out of Colonet heading south. Initially it was a group of small villages with a lot of speed bumps and blowing dust. It reminded me of driving thru Africa. I could have done without the dust. Eventually I drove out of all of that and driving became more rural. As Hwy 1 turned into the interior of the Baja Peninsula it became more mountainous. A lot of tight turns, 25 to 40 Mph / 40 to 64 Kph curves, with step grades up and down. This week is the 50th Anniversary of the Baja Race. Hwy 1 is full of pickup trucks racing to get to check points and provide support for their cars and drivers. I can’t tell you the number of pickups that passed me trying to keep ahead of their cars. The race ends in La Paz, BC (Baja California). I’m not sure what day that will be. I just wave them on by. I spent a lot of time at 50 Mph / 80 Kph because I don't want to be in the way of those guys.

Parts of the road was reminiscent of the roads I drove in Russia. A lot of potholes about 2 Inches / 5 Centimeters deep. Some of the potholes were bigger and some were deeper. I was constantly weaving around the road to avoid the potholes. I believe this pothole dodging will become pretty regular as I keep driving south into Mexico. I stopped once to take some pictures of National Desert Park. It had some really tall saguaro cactus and large round stone formations. By 4:00 p.m. I arrived in the town of Catavina, B.C. I was going to get gas but didn’t see any gas stations. So, I’ll have to work on that tomorrow. I saw a newer hotel so registered there hoping to use their Wi-Fi and send pictures. Nope, you had to pay 30 Pesos per hour to use it. I sent Mary a Spot (personal locator beacon identifier) telling her where I was. She gets and email and can see where I am on a map.  It also tracks my route for future reference.  I took a shower and it sure was nice the water didn’t smell. 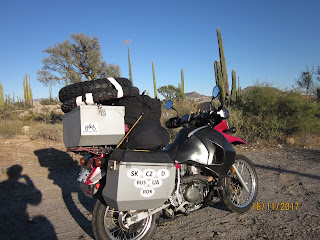