18 November 2017 – When I got up starvation was setting in so I went and ordered breakfast. My day improved 100% once I had some food in my stomach. As I was packing up my motorcycle I glanced down at my rear wheel and saw that one of the lock nuts to adjust my rear axle was missing and the other one was loose. I’ll have to find a nut, but where? So, the hotel manager walked by and I asked him if he knew where I could find a nut. He recommended I check 11 blocks down next to a restaurant. He said they work on motorcycles but don’t sell them. I thanked him and left. Across the street sitting at a weld shop were two dirt bikes. They riders were getting their friend's kickstand welded up. Apparently he broke it off while riding the day before. So, they were getting it welded for him while he was waiting in the desert. Another thing they were on a mission for was to find a clutch. The friend in the desert thought his rear wheel was spinning and in reality his clutch was slipping. The guy burnt up his clutch. So they were trying to figure something out for that. No motorcycles or parts were sold in the town so they were in a bit of tight spot. They stopped in at a car repair shop of sorts and talked with the mechanic. He dug out some clutch plates they thought they could make work. What they were doing is my worst nightmare. They recommend I stop and talk to him. 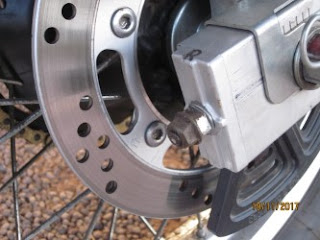 I rode down by this guy and gave him a chat. The concrete in his parking lot was so out of flat that if I put the kickstand down my motorcycle would have fallen over. God, I must have messed with that kickstand for almost ten minutes before I found a spot I could trust that my motorcycle wouldn’t fall over. It was crazy. The first thing he said was one nut was good enough. I wasn’t hearing that. I told him I need two nuts, not one. Off he went to look for a nut. He dumped out his collection of nuts. All red with years of rust. He’s hunting frantically for a nut and finds one. The nut I need is an M8-1.25 pitch. So, I try it and it fits. I think I gave him 5 pesos (20 cents) for it. I also picked another one out of his stash. It wouldn’t screw on because the threads were full of dirt and rust. I put that with my spare parts for another day.

I drove back up to the two dirt bike riders and talked some more with them. They're on their way to Cabo San Lucas but wanted to play some in the sand. I can assure you my bike will never be in the dirt: strictly black top roads. That’s all the off-road riding I want to do. I gave those guys the address of both of my blogs which they said they were interested in. We parted wishing each other good luck and safe travels. 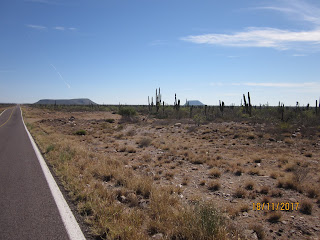 My destination today is Mulege. I drove thru a lot of open country with cacti and a few large mesas. You can see them in my pictures. It was quite a pleasant ride. No potholes or really bad roads. The bad roads were in the towns with bad traffic. I have a feeling I will see more of this than less. Mulege was pretty nice. I saw a hotel I thought I would stay at. I had to drive a kilometer off the main highway to get to it. Alongside the road was an air strip. I saw the price of one night go up. The closer I got the higher the price was going up. I walked inside and the desk girl asked if she could help. I asked the price and she said, 1500 pesos ($75). I told her I would look for another hotel and left. It was a nice place. I drove back toward town looking for hotel signs. I found a hotel with camping. So I drove down this hill to get to the hotel. You go down the hill and when you get about half way down it makes a 90-degree bend and then continues on down to the hotel. You guessed it, I’m worried about how I’m going to get up the hill with my bike packed up. I’m still worried about that. I find the office and the office manager. He is working around the hotel so it took a bit of looking to find him. The price of the room was 400 pesos ($20). I thought it might be more. The room looked nice enough for me. So, I stayed. While I was unloading my motorcycle, I met Carmen. She is a solo bicycle rider whose has been traveling over 2-1/2 years thru 30 plus countries. Truly a rare person. She shared with me many of her traveling experiences. I listened intently gleaning every piece of information I could use.  We probably spoke for 2 hours. I enjoyed that conversation very much. I want to get her picture but it was too dark. I said, I’d get her picture in the morning. I sent my spot to Mary and went to bed. 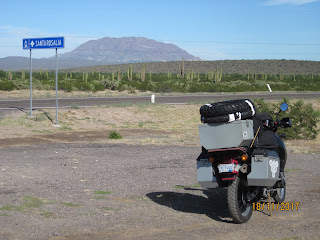