26 October 2017 – My brother and I went shopping for food and some specialty items that I will need to change oil and do a variety of maintenance work I will perform on my motorcycle.

27 October 2017 - The first thing I needed to get done is wash and clean the motorcycle. For whatever its worth it’s not easy to find a self-service car wash. We found one some distance from the house. I also purchased some degreaser for the job and we headed home. My brother convinced me his garden hose had enough water pressure to wash my motorcycle. So, I tried it. It looked promising. I rolled my bike out into his back yard and covered it with the degreaser and let it soak. 20 minutes later I began hosing it off. To my surprise the city water pressure was enough break the grease and dirt loose and wash it away. I re-applied another coated of degree, let it soak and then washed it off. Then I used a gas rag to wipe the rims, spokes and hubs clean on both wheels. I also wiped off the saddle bags to remove any grease still on them. I wiped everything dry and pushed it back under the veranda. I was now ready to start disassembling it for maintenance.

I still haven’t received my passport. Mary was supposed to receive it on the 19 October 2017 from the Brazilian  Consulate in Chicago with a shiny new Brazilian visa in it, but it has not shown up. The processing time is two weeks and they have strict rules on processing it. Believe me if you don’t have your paperwork in order when you send it to them, two weeks later you will receive your passport back with no visa. Because I was driving to Brazil, I had to outline my itinerary in the form of a timeline from the time I left the U.S. until I enter Brazil. I had to break this timeline down in the number of days I would spend in each country I passed thru. I also had to do the same timeline on the return to the U.S. I had a passport agency handling this but it seemed like they were pretty lax on how much help they would provide. This proved to be quite stressful. I’ll have to check Mary to see what’s up.

Guess what?  Mary called the passport agency, and they had the passport waiting for confirmation of our home address.  Now wouldn't you think the home address in the passport would be where they should send it??  Mary cleared up the confusion, they apologized for the screw up, and sent the passport to Mary.  She did her thing, and the FedEx Truck just showed up and delivered my passport. I did a quick check to see what my Brazilian Visa looked like. Everything looked in order. Thank God, what an ordeal.

28 October 2017 – Over breakfast, my brother and I talked some and then moved out onto his veranda. He presently is rebuilding it. It’s quite the task and I’m glad he’s doing it instead of me. He took up a position in his chair smoking a cigar and begins telling me his version of war and peace. I began getting my tools out, removing my saddle bags, removing the side panels on each side of the motorcycle, removing the seat and then removing the gas tank. All of the above is pretty straight forward. With that completed I am ready to start reading my instructions on how to check the valve clearances. This will be the fourth time I’ve checked them. 1st at home on the new motorcycle, 2nd 2009 in Seattle, Washington 10,000 miles, 3rd in 2010 at home 20,000 miles and this will be the 4th time in Walnut, California 35,000 miles. I always use MarkNet – KLR650 instructions. They have been a great help. Bear in mind my 2007 KLR 650 Kawasaki is 10 years old and there have been some changes in the new KLR motorcycles since then if you would decide to use his recommendations. Anyway, it’s too near dark to work on the motorcycle any further.

29 October 2017 – I set about checking valve clearances. Getting that valve cover off that engine is always a challenge, enough so that a few choice words often helps. I turned the engine over till I found Top Dead Center and checked the shim spacing. Much to my surprise the intake valves you could easily slip in the high limit shim and one exhaust valve you could easily slip in the high limit shim and the other had a light drag. I checked it with the shim .001 thinner and shim slid right in. So, in a nutshell I didn’t need to make any changes in the thickness of the shims. I did the happy dance - luckily no one caught that on camera. I cleaned up all the gasket surfaces, put in a new gasket, and put the valve cover back in place………….always a lot of fun. Once in place, the gasket lined up in all the right places so I torqued the cover down. I hooked up all the disconnected wires and bolted the fan back into place. I also switched out the old headlight relay for a waterproof relay for my high output light. Rain sometimes can be real mischievous with your electronics at the least opportune time. At this point I filled the carburetor float bowl with gas and started the engine to make sure I didn’t have any strange sounds coming out of it.  No grinding, hammering or other weird sounds. It fired right up and sounded great and stalled out when the float bowled emptied out. Of course, I was under the direct supervision of my brother while enjoying his cigar. I will clean up the scattered tools, throw out the trash and move all my tools inside. At night his sprinklers come on and wet down at least half of the veranda floor. My tools are mostly sitting where they would get wet. I have my bike setting in the dry area. Tomorrow I will have get my tire changed.

30 October 2017 – I’m going to replace the o-ring chain and front and rear sprockets when I remove the rear wheel. First, I will remove the master link so I can remove the chain, then I’ll loosen the large sprocket nuts and remove the wheel from the frame. My brother's friend Jim from across the street came over for a visit. We all made small talk for a while and then I mentioned that I would need a torque wrench. Jim said, no worries he had one. So, he and I walked over to his house and he dug it out of his truck. By him lending me that torque wrench he saved me from having to borrow one from one of the auto parts houses. Thanks Jim. Back at my motorcycle I continued working and Jim and Larry were smoking cigars. I removed the guard covering the front sprocket and cleaned all the grease out. I then removed nut off the small sprocket. I was expecting the splined sprocket to be difficult to remove but to my surprise it just slid off the splines. I cleaned the area out much better after the sprocket was out of the way. I installed the new sprocket and torqued it. A difficult job done and I was glad it was done. ­­ The cigar smoke continued to billow out from under the veranda till the day light went away and the cigars burned out. Then everybody went home.

31 October 2017 - It was as difficult as always, but my brother and I succeeded getting the tire off and the new tire on. We also didn’t pinch the inner tube. That’s a huge plus. I inflated the tire and only one bead seated. I couldn’t get the second side to seat. So off to Bert’s Mega Mall. Bert’s is the Kawasaki dealer in the area and I was leaving my wheel for these guys to seat the second bead and balance the wheel. While there I also picked up an oil filter for when I changed oil in my bike. My brother was surprise at what he saw on the show room floor. The watercraft, the 4-wheelers, side by sides, every kind of motorcycles you can think of, scooters and every accessory you will ever need. I think it’s largest dealer ship of its kind in the United States. Personally, I never saw any dealership of this magnitude. At this time, I never knew Bert’s Mega Mall would reach so deep into my pockets as we were leaving. We went back home. 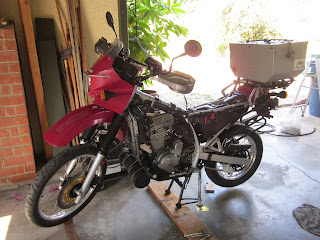