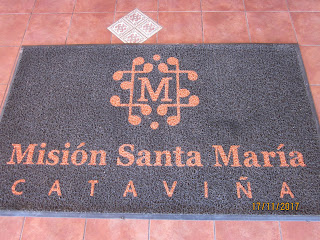 17 November 2017 – The Mission Catavina is a pretty nice hotel. It’s has a very Mexican décor. I sent Mary a Spot Message and while waiting for it to send I saw where I could purchase some gasoline before I leave.  After the message went off into cyberspace, I drove over and put in three gallons of gas. They were selling it out of 50-gallon drums alongside of the road. I went back to the hotel and loaded my bike. A husband and wife rolled up on their bicycles. They were from Scotland and riding down the Baja Peninsula off-road. After they ride down the Baja there going to travel to New Zealand and ride bicycle there. Nice people. 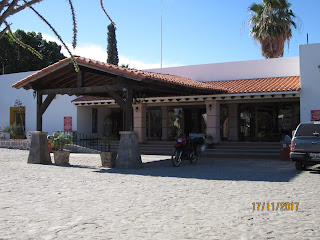 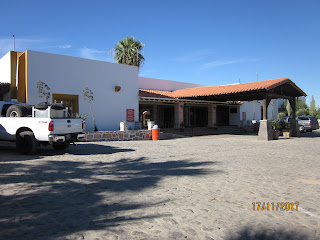 I finished getting my clothes on and left. Riding was pretty much like yesterday without all the mountains. It still was pretty much flat with rolling hills. Lots of saguaro cacti and desert. I stopped to eat in the town of Nuevo Rosarito. I ordered in Spanish and the waitress understood. I was proud of myself. I asked the cashier at the restaurant if he knew where an ATM was. He said I’d have to drive to the town Guerrero Negro. I thanked him and left. 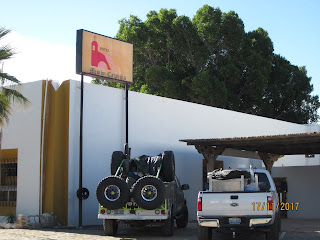 I jumped on my bike and rode to Guerrero Negro. On the way the rode was full of pot holes. I was weaving through them, dodging about 95 per cent of them. I was actively dodging this group of pot holes, when I missed a deep hole and drove into a deeper one. It must have been 6 inches / 16 Centimeters deep. A 1/4 mile down the road sat a car looking at their left front wheel. No joy there. About a 1/2 mile farther down the road sat a little red car with its four occupants changing a rear tire. A semi-truck stopped to help. One mile or so down the road I saw a shoulder I could pulled over on. I got off my motorcycle and looked at my front wheel. It took a bit of looking but I saw the area that hit the sharp edge of the pothole. I said a few choice words as I was looking at my bent front rim. I just replaced that front rim this year, less than 6000 miles / 9700 kilometers ago. I’m going to keep going with it. If it gives me any problems it may end my trip to the tip of South America. 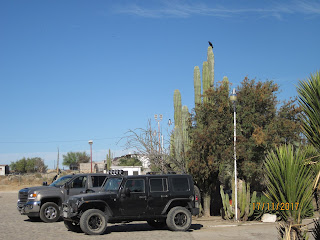 I arrived in Guerrero Negro and purchased some gas. I needed to purchase some pesos because I was running low. I pulled into this fancy hotel and asked the lady at the front desk if she knew where I could find an ATM. She used her cell phone to translate for me and told me the name of the bank. BANAMEX. She drew a small map showing me where the bank was. So with her instructions, I set off to the bank. I made a wrong turn into a hotel. When I drove in to the hotel there was no sign of the bank. I asked several maintenance guys if they knew where the bank was. The oldest guy said about 2 kilometers down the road. So, I followed the street till I came to the curve in the rode the lady at the hotel was talking about. Sure, enough with a little looking I found it. I was hoping I wouldn’t have any problems with the ATM. You had the option of using it in Spanish or English. It pretty much had the same format as the US Bank ATM’s back in the US have. I left the bank and headed back in the same direction as I came into the city. I saw a not-so-fancy hotel with the parking lot full of Baja trucks and trailers. I knew it wasn’t all that expensive so I will stay here tonight. I asked if they had Wi-Fi and they did. I found my room, unloaded my motorcycle and oiled the chain. I thought I could send pictures for my blog but for whatever reasons the Wi-Fi was not working for me tonight. Bummer!!! I finally got a hold of Mary when she landed in St. Paul / Minneapolis Airport. She just got back from a work conference in Las Vegas, NV. We texted back and forth because we couldn’t get thru with SKYPE. So ended my day.

I have to say that the technology on this trip is light years ahead of when I went around the world in 2009.  Of course, I didn't even have a smartphone then.  I got my first smartphone this spring, and learned how to use it all summer.  Mary and I loaded up the Skype and sat side by side practicing how to use it.  Old people learn slowly.  It has been great though.  Now if I can just remember to use Google Translate!