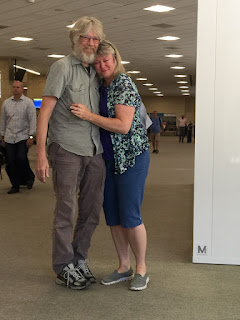 12 June 2018 – Today my girlfriend Mary will be arriving at John Wayne Airport in Santa Ana, CA. It will be the first time I’ve seen her in 7+ months. While I was traveling thru Mexico and Central and South America, we Skyped almost every night unless the wi-fi was poor. If we couldn’t we would text back and forth. We have a lot of catching up to do. So, I’m guessing most of the day will be spent talking and visiting with my brother and Tonya. It will be exciting to see her.

Larry, Tonya and I drove down to pick Mary up from the airport. We parked and walked in. We waited for Mary at the big statue of John Wayne and when she arrived, we hugged and played kissy face and huggy bear. It was kind of an emotional moment for the two of us. When everything settled down, we left the airport holding hands. 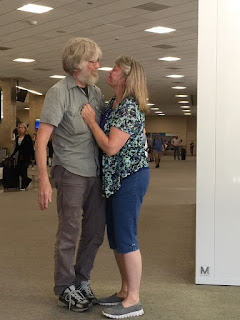 It was near or just past 12:00 p.m. and we decided to eat Chinese dim sum. This is a favorite of Larry’s, Tonya’s and Mary's. I’m sort of I’m hungry, let’s eat, and a Chinese Buffet is more my style. Because I had no knowledge of Dim Sum I decided to look it up in Wikipedia. Here’s what I found out; Dim sum is a style of Chinese cuisine. It’s prepared as small bite-sized portions of food served in small steamer baskets or on a small plate. Dim sum dishes are usually served with tea and together form a full tea brunch. It is generally considered Cantonese, although other varieties exist. Well, there you have it. Just for the record as we ate the different dishes, they were served in small bite size portions like it stated in Wikipedia. After everyone over ate or comfortably ate their fill we returned home. The rest of the day was spent in conversation and resting up. Some libations were also enjoyed. 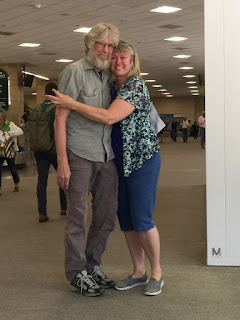