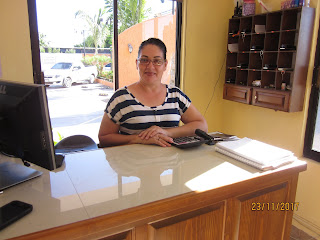 23 November 2017 – I usually don’t take too many pictures of hotels, but this was a nice hotel and the receptionist Cecilia was a cordial individual who made my stay comfortable. I stopped in the office to return my key and asked if I could take her picture for my blog. She agreed and was a little shy about it. I was all loaded up and rolling by 9:00 a.m., not that that’s anything special. But I was well rested with plenty of water in me. As I left town I was looking for any scars from the accident scene the day before. You would think when a semi-truck rolls over on its side the black top would have some scratches in it or the ditch would have some pushed up dirt. Nope, not a thing. So, I just kept riding toward La Paz. 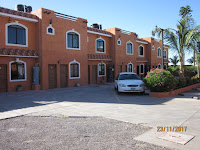 It was between 12:00 and 1:00 p.m. and I was getting hungry. I decided I’d get some gas in La Paz and some water. I stopped in one of the convenience stores to see what they may have. I bought two bananas, two liters of water and two candy bars. The cashier rang it up and I paid for it. The whole time I was in the store, security was following me around. It just kind of reminded me of Russia. It also told me that if they were worrying about me, they had a larger crime problem in the city. I walked back to the shade my bike was sitting in. I ate the two bananas, one of the candy bars and drank one liter of water. I jumped on my bike and was off, but before long, I was lost. I rolled up alongside of guy riding a scooter and asked him which way to Cabo San Lucas. He pointed up and to the right. All that time Blanche was trying to drag me over hill and dale. She was being her obnoxious self. I finally got to a point where I felt I was going in the right direction and rode heavy traffic for next the next 5+ miles / 8 kms. I finally broke free of traffic and continued down Highway 1 to Cabo San Lucas.

I stopped for the night in Santa Rita. I was running out of daylight and needed to find a hotel. I saw a hotel sign pointing into the city. I made a left turn off the highway where I could stop safely. On a whim, I asked Blanche if she knew of any hotel in the area. She came up with a hotel about 500 yds / 500 meters away. I drove there. Just unbelievable that she cooperated.  It was a nice clean hotel for a reasonable price. They even had a small restaurant where they served meals. The guy was doing the cooking could speak English. He asked where I was from. I told him St. Paul / Minneapolis, Minnesota. He said he knew where that was and that he worked up by Fargo, North Dakota. Imagine that! The Huevos Rancheros he cooked up was good and my stomach was happy. I was about 22 miles / 35 Kms from San Jose del Cabo. Just the right distance. 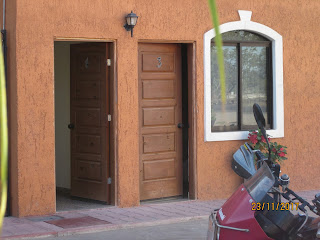 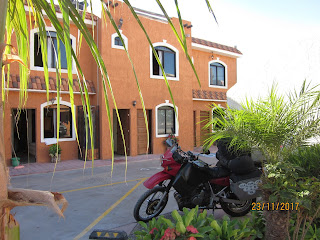 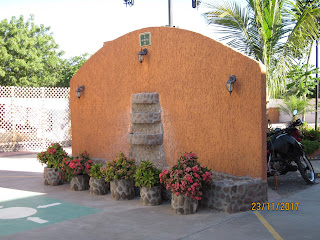 The only complaint I had with the hotel was they had a weak Wi-Fi signal. If you got more than 5 yds / 5 meters away from the reception area, you lost your signal. I wanted to research the Hampton Inn near Cabo San Lucas and its address. Mary had me booked in there and I needed to find its location. Blanche wasn’t having anything to do with the address. That makes finding anything really difficult. The best I could hope for would be to find the hotel in Blanche’s maps, mark the spot and drive toward the marked spot. I was trying to compare the maps in Blanche and Google Maps to find the hotel. That didn’t happen, and I went to bed very frustrated. I spent several hours struggling with my phone and Blanche and didn’t accomplish a thing. That’s why I wanted to stop short of San Jose del Cabo so I could get my directions straight and I would know where I’m going. At least I wasn’t hungry.
Posted by Beauty at 11:58 AM