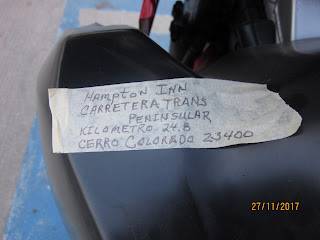 24 November 2017 – I got up and took a shower and put Blanche back on my motorcycle. Even though she locks onto the handlebars, I bring her inside with me at night. The day could only get better. I grabbed my cell phone and my roll of masking tape and headed to the receptionist desk. I had her hook up my phone to the Wi-Fi and proceeded to navigate the hard way. I found the Hampton Inn on Google Maps. I started looking for significant landmarks that I could easily see. First I had to cross a body of water, second Office Max, third Home Depot, fourth a Honda Car Dealer, fifth a Mercedes-Benz Car Dealer, then the hotel and a hospital, and the Hyundai Car Dealer would be too far. All these were alongside the road. I wrote this all down on my masking tape and taped it on the gas tank. I also taped the address of Hampton Inn on the gas tank in case I had to ask someone for directions. I loaded up my bike and was off. 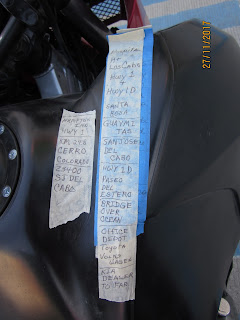 I set Blanche looking for Cabo San Lucas, so she would keep me on the correct road. I kept driving until I crossed the large body of water. It got a little bit more complicated after that. I saw Office Max, I saw a Toyota Car Dealer, I saw the Mercedes-Benz Car Dealer. I was now looking for a hospital or Hampton Inn. What you don’t know is that these different landmarks could be quite a distance apart. They were not right next to each other. So, I’m going up a hill and drive right by the Hampton Inn. I didn’t see it, but I saw the Hyundai Car Dealer. Good landmark! I hooked a U-turn and drove back down the hill. Sure enough, there it was and so was the hospital. All this looking makes you drive erratically, which is not a good thing. That’s why I try to plan out my route thru a city.

Anyway, I drove up the driveway to the hotel. I didn’t know if the entrance was in the back or the front of the building. I get in the back and it was the emergency entrance for the hospital. I drive around front and there’s no place to park. I park right in front of the doors on the road. I get off and go in. I ask the guys at the reception desk if this was the hospital. They said, if you want the hospital, go next door. I said, good, because I’m looking for the hotel. I gave them my confirmation number while they viewed me with much suspicion, maybe because the reservation was under Mary’s name. Once I provided identification though, everything was ok.

I unloaded my motorcycle and took everything to my room. I hooked my cell phone up to Hampton Inn’s Wi-Fi. Wham, I was connected to a strong signal. I ran a check for a McDonalds. Sure enough they had one in town and a Subway too. Imagine that! I rode down there so I could get something to eat. You know those French fries really do taste good. I also went to a Walmart-type store and used the ATM and bought a couple of loaves of French bread. I packed them into my saddle bags. I slightly crushed them. No worries I will eat them anyway. 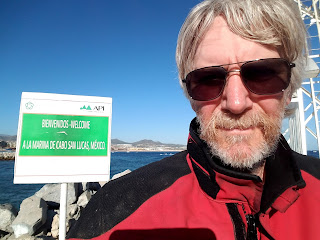 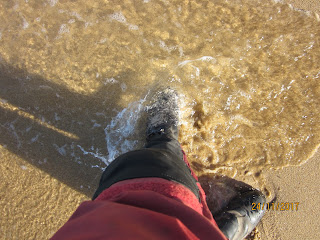 I walked down to the beach and got my toes wet so I can say I had my feet in the Gulf of California and the Pacific Ocean. I went back to my motorcycle and was getting ready to leave. A gentleman from Utah came up and with his son and started talking with me about my motorcycle. We talked about riding motorcycle, my motorcycle trip around the world and my trip to the tip of South America. We had a nice friendly chat. He introduced me to all his sons and his friend’s son. They all were on a fishing mission. So I left them to it. I was about to leave, and this lady wanted to have her picture taken with my motorcycle. I took one of her. Her husband didn’t want to have his picture taken. I jumped on my motorcycle and drove thru the tourist part of town and back to the hotel. On the way back, a 3-car accident was on the highway. I believe Americans were involved. I don’t think anybody was hurt. 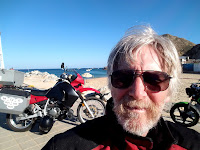 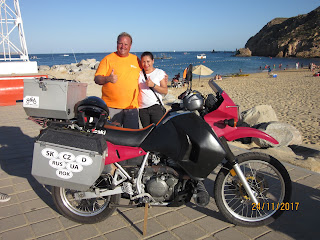 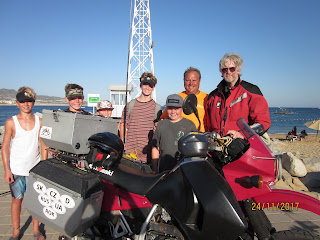 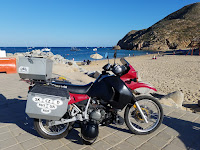 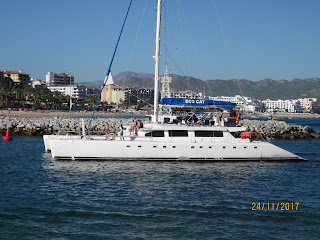 I got back to the hotel and went to park my motorcycle in the underground parking ramp. Security came over and said I had to leave. What now?? I went back to the receptionist and asked him about parking. He said I can park in the ramp. He called his supervisor and his supervisor came down in the ramp to make sure everything was ok. I assured him it was. I locked it up, pulled my GPS off and covered it. I stayed in for the rest of the night and watched television.