5 April 2018 – Today I am leaving Sierra Grande and my comfortable cheap hotel at about 9:00 a.m. I fill up with gas, eat a light snack and I’m off. They talk about the loneliest roads: this one rates right up there. Endless wide-open expanses and flat. Thank goodness no wind. There is nothing to slow it down or break it up. It was mostly desert with scrub brush. I’m sure I saw my last of the guanacos / Llamas. I saw three of them alongside the road. I didn’t see a single rhea. 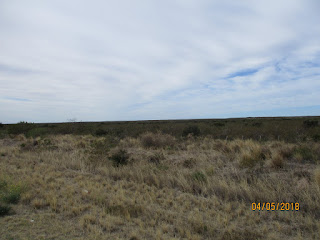 I stopped for gas and a light snack about half way to my destination. A guy stopped for gas and was all excited about seeing my motorcycle. He rushed off to his car to get his cell phone and showed me his motorcycle. It was a newer blue Kawasaki KLR 650. It was newer than 2007. I gave him one of my cards so he could look at my blogs and see the different changes I made to mine. 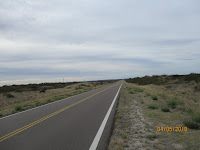 The farther North I went, the more it began to look like I was riding thru North Dakota and Northern Minnesota. The desert turned into large green fields with shelter belts with farm equipment. The shelter belts had different trees and not the usual cottonwood trees you see in North Dakota. I saw one large herd of cattle and then random smaller groups.


It then turned urban when I started entering Bahia Blanca. I found a nice hotel alongside the road. That was convenient so I didn’t have to ride into the city. This hotel was perfect. It was right alongside of Highway 33, which I was going to take north to Rosario, Argentina. I wanted to avoid Buenos Aires. I checked into the hotel and then continued working on my blog. I decided to eat in the restaurant sometime after 8:00 p.m.


The waitress brought over the menu and started talking Spanish to me like I was a native. I told her I didn’t speak Spanish and she freaked out. She went and complained to the management that she wasn’t serving me. Another younger waiter came in and took my order. Everything went smoothly. I used my cell phone to translate the menu. The older waitress brought my food and forgot to bring my french fries. I had to remind her to bring them. It was a meal of raw ham and some type of pasta. The pasta was good but I wouldn’t reorder the raw ham again. I ate everything despite that I didn’t really care for the ham. I skyped with Mary and then went to bed.
Posted by Beauty at 1:57 PM