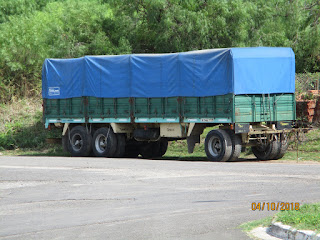 10 April 2018 – I got up early and loaded my motorcycle. I wanted to get an early start. I almost needed a flash light to load it. Once I got it loaded I went and ate breakfast. Every time I leave a hotel now, I know I’m getting closer and closer to leaving South America. So, it’s like I need to take a 2nd look to remember it. I got dressed in my AeroStitch Suit, returned the key and I was off. I forgot to fill up with gas before I left town and the gas station was right there. I drove right by it. I know I was thinking about my routes and whether they were going to lead me to Casilda, Argentina.


I was about 15 Miles / 40 Kilometers South of Rosario. I stopped on my way for gas and then got on the bypass route. My first bypass route work flawlessly. I crossed one set of railroad tracks that were dangerous, and unbelievable was an understatement. There was a 1 Foot / 35 Centimeter deep ditch on the outside of the tracks on both sides. The cars cross at an angle so as not to get hung up. The semi-trucks just drove straight across bouncing along. You could not cross those tracks at 5 Mph / 8 Kph. I’m pretty sure if you tried crossing those tracks straight on at 20 Mph / 32 Kph your suspension would be trashed. You would think that a road hazard like that would be repaired instantly. All the traffic has to stop to cross it. Guess what the street vendors don’t want it fixed because when the traffic stops they can sell candies and cold drinks to the truckers and cars. To add insult to injury….the road is an Autopista / Interstate in our language.


The 2nd route around Santa Fe worked flawlessly. Of course, Blanche is always trying to find a shorter route. To get a shorter route she navigates down the off ramp and then navigates up the on ramp and back on the Autopista / Interstate. I fell for it once but she tried it 2 more times. I just followed the route which irritated her but we made it around the cities just fine. The 3rd route worked flawlessly. I took the wrong exit once. That was my fault. It wasn’t a bad thing because the exit I should have taken was under construction. I took a break once to get something to eat and then continued on.


I made it to Cerrito, Entre Rios, Argentina about 1:00 p.m. I paid for two nights because I need to work on my blog. After I got settled in my room I walked down to the nearest gas station to see if that had any decent food to eat. I asked if there were any car washes where I could wash my motorcycle. After a bunch of talk someone said there was a place called “Two Brothers” that washed cars and motorcycles. One of the people in the conversation offer to drive me over there and to check the place out. The place also changed tires, washed vehicles and god knows what else. The guy gave me a ride back to the hotel and I had to figure out how to get back to the car wash. That was a bit challenging because we probably turned 5 or 6 six different corners and then came back a different way than we went.


I did eventually find my way back to the car wash or “Two Brothers”. I sprayed the wheels and engine with degreaser. My bike sat for a while because they were busy so they didn’t get to it right away. They wanted to use a pressure washer and start blasting with it. That didn’t set too well with me. I didn’t want to get water in my wheel bearings, speedometer and tachometer flooded. We then pressure washed the bike. The pressure washer never got near my wheel bearing or my instrumentation. When that was over we talked some about my travels and what I did for a living. I told them I was machinist for 37 years and showed them pictures of some different types of work I done. I gave them copies of my blog which they could look at if they wanted.


I then drove back to the hotel. I checked the town out on the internet to see if they had any restaurants. They did. The receptionist had a small city map and showed me how to get to the restaurant. I ordered the usual……a hamburger and french fries. I came back, skyped home and went to bed.
Posted by Beauty at 1:59 PM