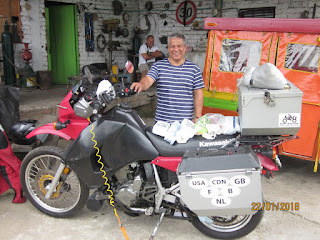 22 January 2018 – When I got to the appointed place at 8:30 in the morning, I didn’t see Carlos standing by his house where I was supposed to meet him, so I walked over to the grocery store and bought some apples, candy bars, bread and a roll of paper towels. I will use the paper towels when I change my oil. I walked back to the hotel and Carlos was outside his house. I went over and talked with him about the plan for the day. I put my food in my room and then Carlos and I took his motorcycle over to the Yamaha dealer. I purchased 3 quarts / liters of Yamaha 20w-50 oil. 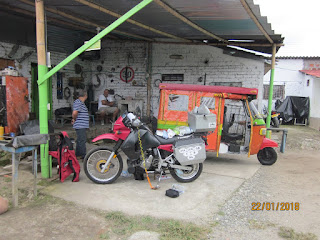 We went back to Carlos’ house and then to a business called Taller Welding where I will change my oil. We borrowed an oil drain pan from the next door gas station. I went and got my motorcycle out of secure parking. I let it run and warm up for a while before I drove it over to welding workshop. The welding shop owner is more like a Mister Fix It. I know he repairs a lot of motorcycle exhaust systems. I don’t believe he does electrical work though. 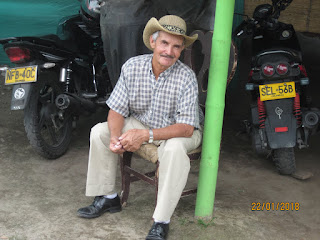 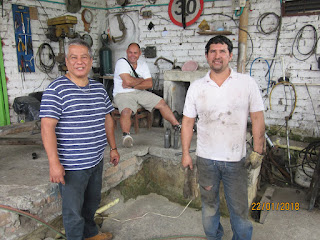 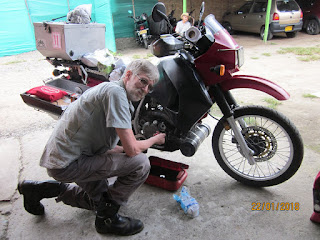 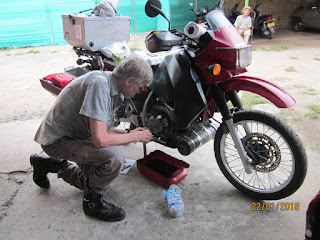 I set about changing my oil. Carlos repaired one of my hose clamps that was broken on my lower tube that holds my spare inner tubes. I think they finally brazed on the adjusting screw end and then Carlos re-installed the clamp. I finished up by putting in a new oil filter and put all my tools back in their appropriate saddle bag. I had Carlos take a few pictures of me changing oil. I took few pictures of the shop where I changed oil and the guys talking while I was changing oil. The guy that owns the shop put together a homemade shear. It was two plow shares bolted together with a 6 foot / 2-meter long handle.

I suspect the cutting edges of these two plow shares were flame hardened or at least one of the edges was. If you know anything about plow shares they have to be able to engage a buried rock and not break or bend. They also have to be very wear resistant. So, I’m guessing they’re manufactured out of medium to high carbon steel. Very heat treatable with an oxygen / acetylene torch. He had an oxygen / acetylene torch that he used pellets (Calcium Carbide) and water to create his acetylene. I’d heard about that process of making acetylene but had never seen it. You know, after seeing that I had to check out that process on You Tube. Pretty interesting stuff. The shear works pretty much like a pair of scissors. I thought that was pretty clever of the guy. I gave a tip and the remainder of the roll of paper towels to the welder for allowing me to change my oil. I then put my bike back into the secure parking building. 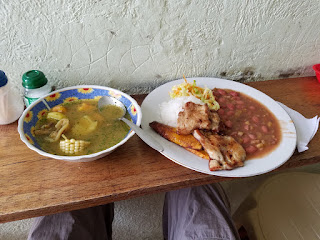 As I was wrapping up securing my motorcycle I asked Carlos if he and his wife would be interested in going out for dinner. I wanted to thank him for all his help during the day. He had to check with his wife before he made any commitments. So I asked Carlos if he would order dinner for me in a restaurant near the hotel. He ordered a typical dinner which was really good. I went back to my hotel room and worked on my route out of Armenia to Popayan. You always have to keep Blanche tuned up. You can never leave her to her own devices. 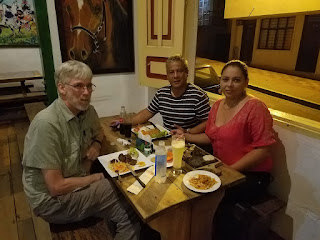 Carlos got back to me and said 7:00 p.m. would be a good time to go out for dinner. I said it worked for me. Carlos, his wife Sadie and I hooked up a little after 7:00 p.m. and went to nice restaurant to eat. He talked about his early life in Armenia, his life in London, England and his wife Sadie. Sadie worked in child care. The earlier years. I talked about my early life and more about my travels. The food and camaraderie was great.  We walked back to the hotel and called it a night. On the way back to the hotel I told Sadie when I filled my gas tank it cost me $17 USD / $50,000 Columbian Pesos. She about passed out. She didn’t know I had a 10 Gallon / 37 Liter gas tank.

I am planning to leave in the morning.
Posted by Beauty at 11:10 AM