4 February 2018 – I got up and took a shower before heading down to breakfast. I met this woman during breakfast. Her name was Elizabeth.  She was pretty much my age or older. She was Canadian from Ontario. For the last twenty years she has traveled. She mostly does volunteer work all over the world. How she finances that is what I’d like to know. Anyway, she was quite unhappy with the hotel. She wanted quiet and a garden in the back yard. Well, the hotel was next to a road maintenance facility with all kinds of truck traffic, air impact wrenches and hammering. She was going to stay two days but decided to leave a day early because of the noise. She had a lot of stories to tell and I needed to get going. We probably talked the most about our travels. She invited me to a nice resort town in Peru on the coast. I know I’ll never go there because of all the distance I have yet to travel. I have a long way to go. 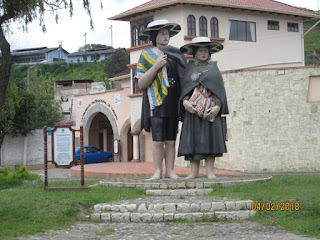 Today I will be riding to Macara, Ecuador on the border of Ecuador and Peru. It is about 120 Miles /180 Kilometers and an easy day’s ride. I kept watching the sky because the clouds were dark up on the top of the mountains. I decided to wear my rain suit out of town. What should have been a 15 minute ride out of town turned into 45 minutes. I should have known when Blanche was having trouble finding satellites this could happen. While waiting for her to her to locate satellites I took the picture of the native guy and girl statue. Blanche got her wires crossed and that’s where the adventure started. Finally, I drove back to the hotel and started my ride out of town all over again. All this time setting at the stop lights made me start to sweat inside that rain suit. I was soaking wet before I left town. After the practice run, Blanche successfully navigated me out of town from the hotel. I stopped for gas and was on my way. 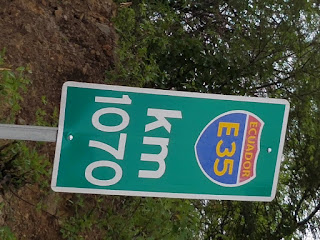 The next six hours were a repeat of yesterday. Up the mountain into the clouds and down the mountain out of the clouds. Again, I had to lift my visor and take off my glasses so I could see. Something about the road today was, the road was littered with small stones, from marble size to 2 Inch / 5 Centimeters. I tried to miss them all. All day I had been wanting to take a picture of the road sign Hwy E35. Finally, one came up. I got stopped about 3 Yards / 3 Meters past the sign. I backed up to where I could take the picture. I pulled out my trusted camera and zoomed in the sign. It wouldn’t take the picture. I’m setting on this tight curve fighting with my camera. It stopped working, exposing me to more danger than I like. I finally pulled out my cell, booted it up and took a picture. This all took over 10 minutes. Can you imagine dying for a picture? That’s what I was thinking all the while I was taking this picture.

Just before I entered the town of Macara I was stopped in a Policia Check Point. First problem: uneven pavement. I can’t put my kickstand down. Fortunately, 3 yards / 3 meters forward was a flat piece of concrete. I was able to get my kickstand down and put my stick under the right foot peg. I left it in gear so it didn’t roll off the kickstand. The person in charge came barking at me wanting something. Finally, he asked for my passport, which he took pictures of and scanned through looking for all the appropriate stamps. A custom representative was there also. Finally, whatever they saw satisfied them and they gave my passport back and told me to leave. While I was off my bike I did some stretches to loosen up some and give my butt a break. I’m sure those police were wondering how this gringo got this motorcycle this far into Ecuador. 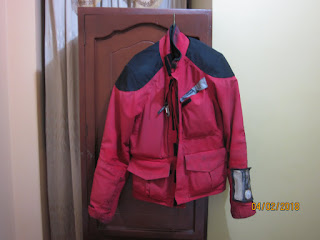 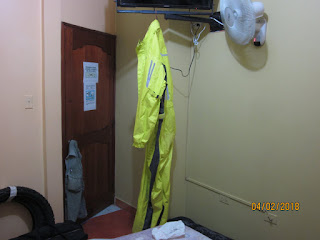 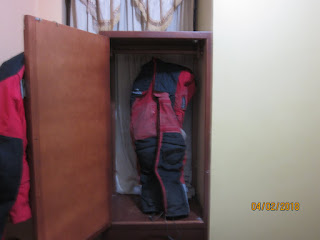 I drove into the City of Macara and entered the GPS coordinates into Blanche for the hotel I was supposed to stay at. Blanche accepted them and when I pushed the enter button, it said my destination was in 52 Miles / 85 Kilometers away. Well something was goofed up there. I switched to Blanche’s list of hotels and picked one and was off. With some help I found the hotel. I got back up against the curb and my motorcycle stabilized. I went inside. They had a room with air conditioning and had secure parking. So, I was good for the night. A young guy in the hotel helped me carry my bags to my room. I tried to get them to order me two hamburgers but they wouldn’t do that. I talked with Mary and some of the people she had at her Super Bowl party. All the people I know. I ate an apple and a Snickers candy bar and fell asleep.
Posted by Beauty at 2:01 PM