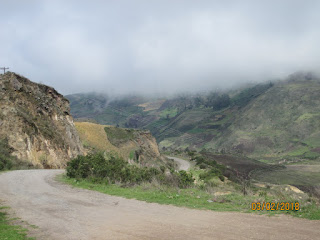 3 February 2018 – I was up by 6:00 a.m., knowing I had a long day’s ride ahead of me. I found my way onto Hwy E35 traveling south, just fine. Traveling through the city went well for the most part. Blanche obediently followed her route and I turned onto the correct streets at the correct time. We were working together quite well. As I neared the center of the city, I started seeing more cows and pigs in the back of trucks, all going in the same direction. It wasn’t overly alarming but I was wondering what’s up with this. Today is Saturday, and sure enough all these critters are on their way to market for selling. 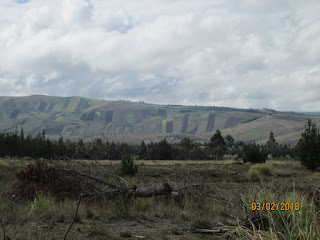 The nearer I got to the outskirts of the city the more congested it was getting. Finally, you guessed it, the traffic stopped dead. I’m setting there wondering if I should wait or push on. I probably waited five minutes and then some other motorcycle riders pulled in with me. They hung around for a minute and surveyed the situation and then moved on. I decided to just follow them as best I can. They were weaving in and out of oncoming traffic and slowly moving on down the road. Those kids weave in and out of traffic like it’s no big deal. If they miss a car by inches, no big deal!  As long as you’re not hurt or injured, it is no big deal. I would say this was going on for a least 1.25 Miles / 2 Kilometers, maybe more. It’s hard to keep track of distances or lengths when you’re driving the center line or the shoulder of the road with traffic only Inches / Centimeters away from you. Eventually I and the other motorcycle riders did reach the end of the line of vehicles. It ended with most of the vehicles making a left turn in to market. I don’t know if the live cattle and pigs were to be slaughtered; they maybe were there just to be sold. 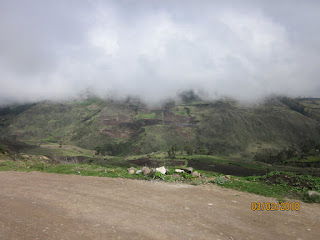 Once I got to the head of the line I was free of traffic. I was planning on being in Loja, Ecuador tonight. The day started out as a bright sun shiny day. I filled up with gas when I left Riobamba, Ecuador so I would be good on gas for all day. I was well passed the city when I entered the mountains. Probably for the next 10 hours I drove straight mountain roads. I believed I crossed five or six mountain peaks and passes. The first couple of passes weren’t too bad. I was in and out of the clouds with no visibility problems. By the third pass, I entered the clouds and they never went away. The next three mountain passes were socked in with fog and you could barely see 17 Yards / 16 Meters in from of you. I was in the 9,000+ Feet / 2700+ Meter height range. The fog was so heavy that the visor on my helmet instantly fogged up. The only way I could keep driving was to lift my visor and take off my glasses. My glasses fogged up just as fast as my helmet visor. I then drove probably no faster than 20 Mph / 32 Km/hour. I also turned on my left signal light so trucks, semi-trucks and buses could see me. I mostly guided myself through the mountains using the white shoulder line. I continued to drive like that until I got to the lower elevations and the fog went away. All the best scenery was masked in fog. 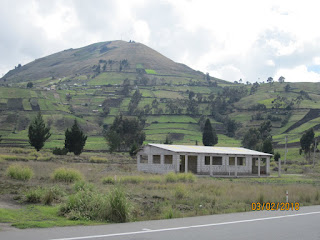 I broke out of the fog coming down one of the mountains and I met another motorcycle rider. He was just waving a lot. He was an Ecuadorian rider and I thought to myself that was odd. Local riders do wave a lot. I suspected something was amiss up front and he was giving me a heads up or a warning. So, I kept my eyes open just in case. I was just coming out of large curve and there were 6 or 8 vehicles….cars and trucks stopped on each side of the road. I slowed down, not knowing what might jump out at me. I passed through the accident scene and in the oncoming lane was a man lying on his side. Two or three people were kneeing by his side. If I had an opinion I would say from his clothes and the fact that he was laying in the road that he was a pedestrian struck by a vehicle. The reason I say that is, people, horses and cows are regular walking travelers on the major highways in all South American countries I’ve been in. I said a prayer for him and wished him the best of luck. I continued on down the mountain and in 10 minutes I met the ambulance coming to accident scene. 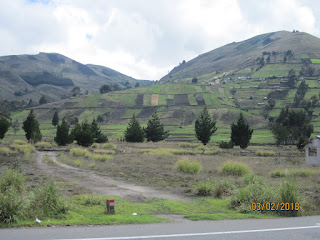 Like I said, all day I drive up one side of the mountain and down the other. When I was in the higher elevations I was in the fog. You know, when it was that foggy I met vehicles without head or parking lights on. I know that fog here is not a once in a year thing. It’s probably pretty regular depending on the weather. I was wondering how the mountain folks keep that dampness out of their homes. I know what it is like inside my tent on a rainy / foggy day. The kids and people seem to be undaunted by it. They’re standing around in short sleeve shirts and skirts.

I was coming down my last mountain in the fog about 6:00 p.m. It was still daylight but it was getting dark fast. I was hoping to break out of that fog soon because I was entering the lower elevations. I was probably 12 Miles / 20 Kilometers out when I broke out of the fog and could see the lights of the Loja City. I continued driving until I was on the outskirts of the city. I then stopped, put on my glasses and looked for my hotel in Blanche’s lodging memory. Sure enough, it was there. Good thing.

So, off we go through a policia check point. They weren’t interested in me. I made all the correct turns but missed one near the hotel. Blanche had a hard time recovering from that. After several recalculations we ended up in the right place. They had a vacancy for $15.00 dollars a night. My kind of hotel! I started things off real smooth and locked my key in the room. The receptionist looked at me like “you got to be kidding me.” They had to do a major dig to find a spare key. Well, I got unloaded, got my bike secured and ate a Hawaiian pizza for supper. I couldn’t eat sitting down because my butt hurt so bad.  After the pizza, I called it a night and went to bed.
Posted by Beauty at 1:54 PM