12 February 2018 – I got up around 5:30 a.m. and pretty much was rolling by 7:30 a.m. I told the hotel owner when I was about to leave that if I would have had my gun, the barking dog would have been dead. He was not impressed that I said that about the dog. The dog stopped barking about 1:00 / 1:30 a.m. That dog barked for 18 hours straight. It kind of sounded like the dog’s barker / vocal chords broke and he / she couldn’t bark any more. You could tell a distinct difference in tone and loudness. He or she tried to keep barking but pretty much petered out after 1:00 a.m. I have nothing against dogs, guard dogs or dogs in general but that nonstop barking was just too much.


I checked my rear brakes for braking capability. I would say the braking capabilities are up to 90 per cent. I’m sure when the pads wear into the disk rotor the braking will be back at 100 per cent. It was Monday morning and I was worried about rush hour traffic into the city. By 8:30 a.m. I was in stop and go traffic. There was no way I could get through it. I still had 6 Miles / 10 Kilometers to my turn off to the Yamaha dealer. I can’t drive that far in stop and go traffic. I pulled off the highway to a side street and stopped until after 10:00 a.m. when the traffic started to free up. 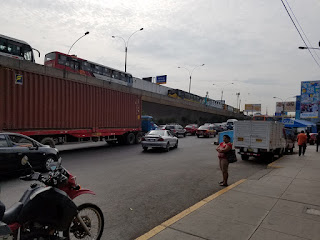 While I was waiting, I drank a glass of fresh squeezed orange juice and ate a slice of pineapple. I noticed a definite pattern in the traffic. When the highway traffic stopped, the traffic backed up on the ramp took off onto the highway, and when the highway traffic started moving, traffic on the ramp would stop and start to back up. So, when I started to see the ramp traffic stopping I jumped in line so I would be ready to merge onto the highway and be off. It worked, and I was back riding again. There were two or three stop and go areas before I reached my exit to the Yamaha Dealer. Once I got on the side streets the traffic got a little more civil, if that’s possible down here.

Blanche took me right to the dealership. I went inside and there was no one interested in talking to me. I was surprised. I walked up to the counter with my piece of paper asking for Yamaha oil 20w-50. The guy freaked out at the cash register because he couldn’t communicate with me. He threw his hands in the air and disappeared. An English-speaking woman showed up and another woman working on another parts computer helped me out. 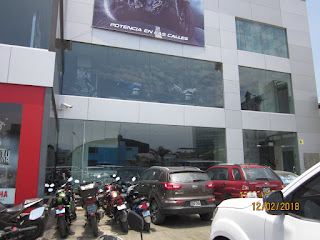 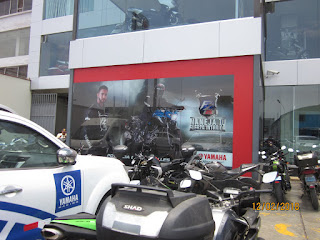 I could not purchase anything from the store without being registered in the parts computer. They needed my name, address and what kind of motorcycle I was riding. So, I had to order the oil first, get a copy of the transaction, take it to the cashier and pay for the oil, she stamped the invoice, I take the invoice back to the parts person, she gets the oil from the parts room, parts room guy stamps the invoice that I received the oil and then the parts lady gives me the oil and a copy of the receipt to me. I staggered around wondering if anyone would attempt to say one word to me. Nope, nada, nothing. That was kind of disappointing. I wondered how many jerk American / European riders they run into in a year? I bet it could be as high as 20 or 30, having a fit about just purchasing some oil.

I walked outside, put my oil in my top box, took a few pictures of the joint and left. Of course, I forgot the name of the street I was supposed to take back to the Pan American Hwy. I staggered around for about 20 minutes before I found it. Then it was back on the highway to Nazca, Peru. The ride to Nazca was pretty fast and uneventful. It was pretty much all brown desert with nonstop shifting sand except for a few plush green valleys. Miles and miles / Kilometer and kilometers of beautiful beaches. I was tempted to stop and check out one of the beaches. I could have set up my tent and stayed a while.

I arrived in Nazca just at sundown. I found a nice hotel with a large secure parking area. I got all moved in and then went out for pizza, and did some food shopping. I’m thinking tomorrow I’ll go looking for a place to change my oil. The receptionist recommend I check out this motorcycle place two blocks away. She showed me the location on a small map that is used for giving directions to tourists like myself. I walked over there just to see where it was. I went to bed.
Posted by Beauty at 12:02 PM