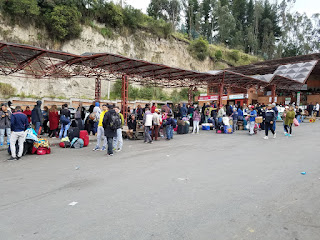 28 January 2018 – I back tracked my way out of town to the highway which took me to the border. Blanche took me right to the border and it wasn’t more than 4 Miles / 6 Kilometers away. I was motioned off to a side parking lot. Customs / Aduana wanted to talk to me. I exchanged all the Columbian Pesos for American Dollars so I was good to go there. I got my papers and headed to the Customs / Aduana. I gave the guy all my paperwork. He was shaking his “head wrong papers, wrong papers”. Finally, he gave up. He told me to go to Immigration and get my passport signed. So, I walked around the building and what I saw made my eyes pop out of my head. The line of people waiting to go into the building was something I’ve never seen before. Conservatively speaking there must be more than 300 people in front of me and growing. Unbelievable! 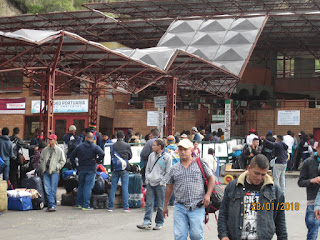 I went to the end of the line thinking this will be a 3 or 4 hour wait. I was standing in line for about 30 minutes and this young woman came up to me and said that people 65 years or older can go to the front of the line. Wait, you mean there is something good about being old? But this didn’t just happen: there was a lot of cell phone translating go on. Eventually, a man offered to show me where to go. So, I followed him and he showed me the door to enter. Security asked to see my passport. After he did the math he let me in the door and showed me the window where to get my passport stamped. I felt sorry for all those people still standing and waiting in line. I went back to Customs / Aduana and they told me to wait while a decision is made. Uh oh. Actually, they were quite nice. Nicer than I thought they would be. 10 minutes later the door open and I was invited in. Imagine being invited in to Customs / Aduana. 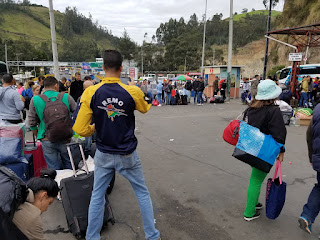 They asked to see my passport and all my paperwork. I spread it out on the table and the new official looked at all of it and then went to his computer for a second or two. He turned around and said I could go! I was expecting him to say go back to Bogota, Columbia and get the right paper work. I quickly gathered my paperwork, shook the guy’s hand and got out the door. I wasn’t waiting around for him to change his mind. I don’t believe I spent more than 2 hours at Columbia’s border. I went back to my motorcycle and pulled off my sweater in case I have to do a lot standing in the sun. 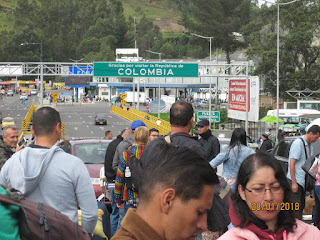 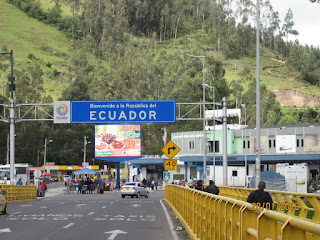 I left Columbia and entered Ecuador. I stopped and took a couple of pictures of the Welcome to Ecuador sign and continued on to Customs / Aduana. I was motioned off to the side and told to park. I took a look at the line waiting to get their passports signed. It was again unbelievable. I was on the side that went in to building. Then I walked around end of the building and continued walking along the other side of the building to almost the end. I was mortified. How long will I be in this line? It was a giant fish hook. I believe I stood in that line 5+ hours. I didn’t know at the time but my face and ears took the worst sun burning in 30 years. I forgot I didn’t have hair covering my ears. I was pretty red by the end of the day. I was thankful it was a cool day because I didn’t have any water and I had my red AeroStitch suit on. It would have been quite a sauna if the temperature had been hotter. 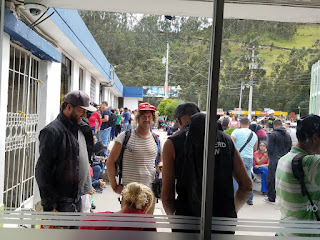 I met a family from Arkansas who were missionaries. It was a husband and wife and two sons. I put the age of the boys at about 6 and 12. I figured if I needed to use the latrine or get some water, I’d ask if their oldest son could stand in my place while I was gone. I never needed that, thank God. They were very nice. Another guy sought me out. I was surprised. He was driving a newer Kawasaki KLR 650 and needed a rear wheel sprocket. He said he didn’t have any teeth on his rear sprocket and was wondering if I had a sprocket to give him. He probably looked at my motorcycle, saw the spare tires, and figured I might also had spare sprockets. So, I asked myself this: if the rear sprocket didn’t have teeth on it, how could the chain or the front sprocket be any good? I didn’t give him my sprocket and felt guilty about not helping the guy out, but I brought that in case I need it on the trip, and there was no way to get another one. 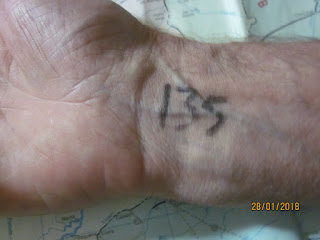 I was about half way to the door to get into the building when an Immigration Official came around and was writing numbers on everybody’s wrists. The reason for that was people where cutting in line in front of people who had been standing for hours. Your number was checked as you entered the building. If you were out of sequence or had no number, you waited your turn. As fate would have it, I eventually did make it into the building and while waiting to get my passport stamped I took a couple pictures of the people who were still 5 or 6 hours out waiting on the opposite side of the building. It was a horrible wait.  I got a drink of water from a guy from Venezuela. His name was Alex. He spoke some English and he did some translating for me. A nice guy. We parted ways after we got our passports stamped. 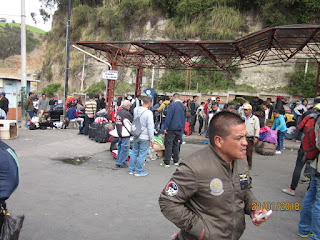 After I left Immigration, I went to Customs / Aduana to get my motorcycle processed in to Ecuador. Guess what…….problems right off. My passport was stamped incorrectly. I had to re-enter Immigration and get my passport stamped correctly. Can you imagine that? I asked myself whether it was intentionally done or was that an honest mistake. I walked back in to where I had gotten the incorrect stamp, and before I said anything, the woman who stamped my passport was motioning me to her window. She fixed the mistake in ten seconds and I was off. I went back to Aduana and the lady there was now happy. 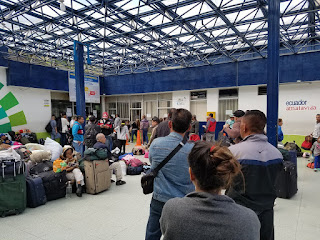 She proceeded to fill out my paper work on my motorcycle. She must have been interrupted 5 times by the same guy with some kind of problem. She typed in all my info online and took a picture of my motorcycle and license plate. She printed out a form with all my motorcycle info and asked me to double check it. I went through it all and in the VIN number, there was a mistake. I showed her that and she fixed it and printed out a new form. I double checked that one and signed it and another form. Whew, I was done with Customs and Immigration / Aduana and Migration. Free to enter Ecuador. Praise the Lord.

I immediately headed to the bathroom and got a drink of water. My stomach was screaming for some food so I walked over to the nearest ice cream stand and ordered an ice cream bar. That soothed my growling stomach. I went back to my bike and a guy from Whistler, British Columbia, Canada wanted to talk to me about my motorcycle. We had a fun talk about our experience riding the Pan American Highway. I then typed in the GPS Coordinates for Hotel Lumar in Tulcan, Ecuador. No problem; Blanche accepted them. While I was doing that there was a growing ruckus with the people in front of my motorcycle. First someone tried to talk to me in Spanish about my motorcycle. I told them I didn’t understand. They were laughing about that. Then a guy who spoke English asked me about my motorcycle and I answered all his questions. Then he told me that one of the girls in the crowd wanted to travel with me when I left. I told him to tell her I would love to have her come with me on my motorcycle but she would have to ride on the handlebars. He told her that and the crowd erupted in laughter. So I started my motorcycle and all the guys wanted to listen to it. I let them listen for a moment and backed out. The girl was watching me real close and I kissed my hand and blew her a kiss. The crowd again erupted in laughter and I drove away.

I headed up the hill toward Tulcan, the city where my hotel was, and Blanche was acting weird. I pulled over and re-entered the GPS coordinates of the hotel. She took them without a problem, but something was wrong. The screen was orange brown. I was mystified. I continued to follow Blanche’s direction and she took me right downtown. I was lost. I parked my bike and asked two guys sitting there under a canopy with a computer. They knew where the hotel was but I didn’t understand Spanish. So that was no help. Finally, one of the guys said I should get a taxi and have them show me where hotel is. So that’s what I did. The taxi cab driver requested to be paid in advance. I paid her and asked her to drive slowly so as not to lose me. She agreed. So off we go and she showed me the general location. I was probably 100 yards from the hotel when she took off. Another taxi cab driver showed me the hotel as he was driving by. I thank him for that.

I parked my motorcycle and feeling somewhat tired, I headed for reception in the Lumar Hotel. There was a room available with secure parking. It was a nice room, with hot water and good wi-fi. I unloaded my motorcycle and asked the receptionist if he could show me where the secure parking was. He walked down the street and he pointed out the location for me. They were waiting for me when I arrived. I parked my motorcycle, marked my location with Spot, and covered my motorcycle. I talked to the lady some with my cell phone translator and then left. I walked past a small grocery store and bought a few items to eat for the night. I came back and ate 5 sandwiches, with meat and peanut butter. The day all of a sudden started looking up. 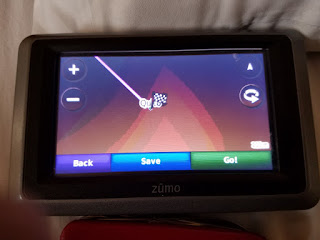 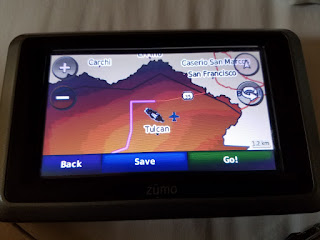 I talked to Mary later in the evening and told her Blanche is acting up again. I told her the screen is orange brown and the cities have no streets, no hotels, ATM’s or gas station. Something is amiss with Blanche. Mary told me she would check into it tomorrow. I took some pictures of the screen of Blanche showing the colors, cities and route completion flag. Also, the container the S/D card came in with the part numbers, SKU numbers and the receipt of purchase. I also gave her Blanche’s identification number for when she calls Garmin.

Now it’s a waiting game to see how Garmin will react to how Blanche is acting up.  Will they be able to solve my problem? I went to bed being glad everything went well at the border today and worrying how will I navigate if Blanche is on the fritz.
Posted by Beauty at 11:27 AM