6 February 2018 – I broke my motorcycle out of jail / secure parking. It was a small parking area and a car had me trapped. I had the guy who was on duty get a hold of the individual who owned the car and move it. It was after 7:00 a.m. so I didn’t feel too bad about it. I moved my motorcycle to the front of the hotel where I could load it. I was on time for breakfast and ate a Breakfast Typical, as it’s called here. I finished loading my motorcycle and departed the hotel.


For some reason Blanche was having trouble finding satellites today. I think it almost took her 5 minutes to find the satellites to get to the border. I was only 3 Miles / 5 Kilometers and she was being a pain. I drove myself back to where I came into town to get myself orientated and refresh Blanche. She was still having problems finding satellites. I was miffed. I started driving toward the border and Blanche’s screen goes black. Here we go again. I thought she died for good. Right as I was driving, her screen goes black. My heart sank again not knowing what the problem was. By this time, I was at the border. I was directed to Immigration and Customs. It took all of 10 minutes to get out of Ecuador. I was still very concerned about Blanche. I tried to fire her up again and she was having none of it. I had an idea that if I removed her from her docking station, removed the battery, took out the Ecuador Maps S/D card and put in the South America NT S/D card she might boot up. I did that and put her back in her docking station. I turned on the key and she fired right up. I typed in several cities in Peru which she found quite easily. I breathed another sigh of relief. I thought Blanche was dead forever. Much as she ticks me off, I need her.

I drove over to Peru in a much better mood and was directed where to park by the Customs Officials. I was off to Immigration when a mini-van full of people unloaded and raced over to immigration to get ahead of me. I just waited my turn and then went to Customs to have my motorcycle imported into Peru. I also had to purchase a minimum of 30 days insurance. The whole process took about an hour and I was done. Just when I was about to leave another motorcycle rolled up. It was a Yamaha Sport Touring Motorcycle. I saw that the guy was more than likely an American. And he was. He answered me in English. Get this…..he was from Chicago, Illinois, U.S.A. He lives about 400 Miles / 650 Kilometers from where I live. We talked some about the roads we traveled and those blasted speed bumps. Peru uses them instead of speed limits. They slow you down. I would put his age somewhere between 29 and 35. His name was Russ / Russel. I asked him how his motorcycle liked the roads. He replied it wouldn’t be his first choice in a motorcycle to ride these roads again. He also suffered from the same problem I have. His bike is too wide to sneak through the traffic like all the smaller bike do. So, you sit in traffic and wait. We swapped cards with our e-mail and blog addresses and I was off.

I stopped along the way to put all my paper work back into my top box which proved to be a bad decision. I had to pass through a check point and Policia wanted to see all my paper work. I had to undo all my locks etc. etc. to get everything back out. Everything checked out ok and they let me go. I drove by a dead horse laying on the side of the road. There was about a 1/3 horse left. Mainly the hide and skeleton. It was a clear example of what happens when you fail to look both way when you cross the road. I should have taken a picture of it. It seems like most critters are pretty smart about not getting hit on the roadways. I always give them plenty of room when I pass them. I would hate to spook them and have them run out in front of me. 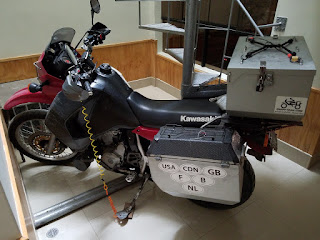 I drove through one city and I said to myself, man this is a dirty city with the dirt blowing around and the traffic dust. Well, it’s not the only city like that. Now I’m in Piura and it has the same dust blowing around, same traffic dust and, of course, the speed bumps, pot holes and broken pavement. Some of the potholes are 12 Inches / 30 Centimeters deep. I watch out for all the pot holes because they unsettle my motorcycle. 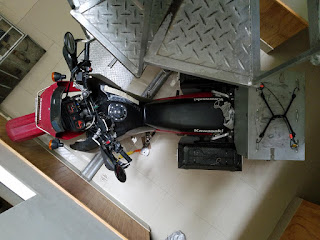 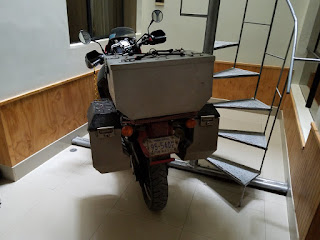 I couldn’t believe I found the hotel I was looking for. Blanche navigated me right in. I ate in an Asian restaurant tonight. I ordered chicken fried rice. I came in the correct amount and tasted really good. Get this,  they had me park my motorcycle inside the hotel at the bottom of the spiral staircase. If that motorcycle would have started on fire no person from the 2nd or 3rd floor could have escaped. I’m sure there is another set of stairs out of the building but I don’t know where they are. What do you think a Fire Chief in the U.S. would do if he saw that? I’m sure it would be a large fine. Back home, the fire department seriously chastised me for having my 1941 Harley-Davidson gas tank in my apartment. I had to remove it and the fire department came back in a week to make sure it was gone or be fined. Anyway, I worked on my future routes around these larger cities and looked for hotels along my routes the rest of the night. I mostly was building routes in Blanche to get around the outside of these larger cities. I didn’t finish mapping around Trujillo because Blanche ran out of battery. I went to bed.
Posted by Beauty at 2:08 PM