7 February 2018 – I wrote in my blog and loaded up and left the Hostel. I had my route planned out of the city. Blanche was cool with everything. I was going to make my third turn to pick up a major street to the Pan American Highway. It was closed down due to road construction and the traffic as a result of it was a mess. I ended up in the downtown marketplace, which was wrong. I eventually got on the Pan American Hwy and was relieved I eventually got out of that mess. About 6 Kilometers down the road I saw a 1N sign saying I was going North. I had to turn around and head back into the city and find the south bound Pan American Hwy 1N. Back into the fray I went. I didn’t have a clue how to find any major thoroughfare through the city. All I knew was I needed to be traveling south. I had Blanche on a route to the next city but she could only find the road under construction. After 3 hours of weaving back and forth through the side streets and alleys I found a major street out of the city which hooked up to Pan American Hwy 1N. Once I cleared the city pulled over and doubled checked that I wasn’t going in any direction but South. From all the tests I preformed I was going in the right direction, and South. 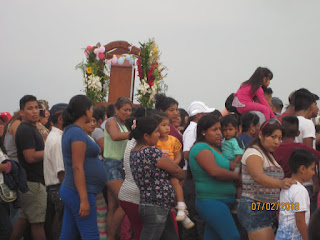 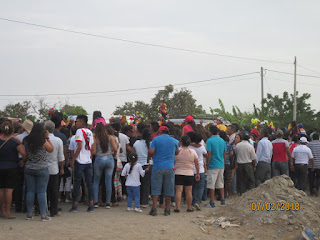 I wanted to stay the night in Lambayeque. Everything was moving along quite smoothly. The roads were good and I should arrive at the city limits around 5:30 p.m. I came into this small town and the traffic was stopped. I peeked around the cars to see what was the hold up. A small parade was forming up and stopping traffic. With a little creative driving I was able to get by all the stopped traffic and the parade people, and continue on my way. I bounced my way through that town and continued on to the next. I felt fortunate I was able to get through that. As I continued to the next town, the road was again full of parade participants dress in a variety of costumes. Mostly a derivative of black with masks. I would say their numbers were over 300 young and old people. They almost looked like Mardi Gras participants. It was the same thing again. The traffic was stopped on the edge of town and this time the parade was marching and dancing. No way could I get through that mass of people. There were the parade people and the people watching the parade on the shoulder of the road. I parked my bike and got off.

I watched the parade as it passed. It was religious driven because they were carrying the Virgin Mary on their shoulders and the dancers were in front of her. It was already 6:00 p.m. and I knew with how slow this marching parade was going, I was never going to get into the town of Lambayeque for the night. In 30 minutes the parade had moved maybe 400 yards / 400 meters. It would march and stop and dance then march and stopped and dance. They repeated that for the next 3 hours. I watched for about 30 minutes and then drove the shoulder until I couldn’t anymore, and re-joined the line of traffic. 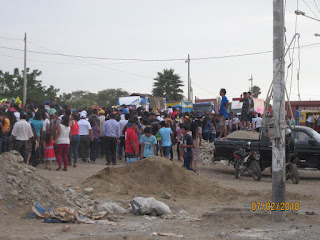 I was in this line for about 1-1/2 to 2 hours idling my motorcycle. I went from being dry to soaking wet inside my riding suit. It was nothing but push and shove in that traffic. If you gave an inch the drivers would take a foot. I must have sweat off a 650 mil-Liter of water. It was the heat of my motorcycle and heat from all the vehicles surrounding me. The sun was just about down and I saw an opening and I bailed out of that traffic. You would move half a yard / 1/2 meter and stop for 2 or 3 minutes. Then repeat that again. The traffic going south was 4 cars wide and it was a two-lane road. One horrible mess. 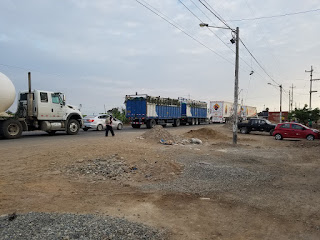 Just after I got out of the traffic I heard an ambulance arriving. That gummed up the traffic even worse. The ambulance had great difficulties getting through all the vehicles. I supposed somebody passed out from heat exhaustion. All the shoulders of the road had vehicles setting on them. I pulled into a gas station and shut off my motorcycle. I threw off my jacket to cool down. I walked over to the gas station attendant and asked him if I could wait here until the traffic cleared. He said, it was ok. I drank some water, ate an apple and a snickers candy bar. I walked around a bit and finally laid down on the car washing ramp. 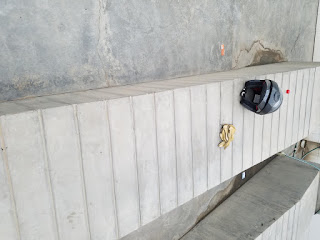 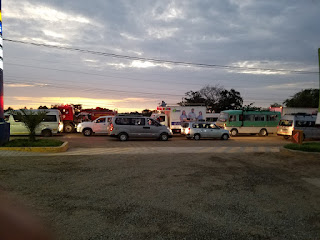 I woke up at 9:00 p.m. and traffic was showing signs of moving. It would move 30 Yards / 30 Meters and then stop. All the while I was resting on the car ramp people were coming in to use the rest rooms. Mostly women. That’s how long people have been waiting. I woke up again at 10 p.m. and the traffic was flowing smoothly or going like hell to make up lost time. I got up and walked around some. That concrete was pretty hard to lay on. I had to decide whether to continue on or stay the night in the gas station. I decided to stay night in the gas station because of the bad roads that go through these towns. I didn’t know it at the time, but that was a wise choice I made. I slept most of the night on the ramp, waking up whenever I needed to roll over, giving some aching hip or joint a break from the hard concrete. The concrete was warm from the heat of the day so I never got cold all night. Some of the mosquitoes were annoying but they were pretty few and far between.
Posted by Beauty at 11:51 AM