15 December 2017 – I need to walk downtown today and get something to eat and scout around some. I would like to find an easier way out of this hotel other than straight up the hill to Mexican Hwy 190. The hill is rutted up, steep, and you have a 6 inch / 15 centimeter jump to get back on the black top. It’s risky to attempt that with my top-heavy bike. So I walked into the town center on a street behind the hotel that was nicely paved. I followed it into town till I found a street that connected back to Mexican Hwy 190 that wasn’t death defying.

I went to the bus terminal that had a restaurant in it. I ordered my usual Huevos Rancheros and Refried Beans. That was the best meal I had eaten in a long time. It was first time it was in such a large quantity. I couldn’t eat all the tortillas. 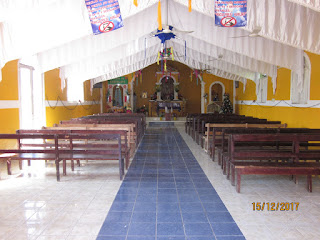 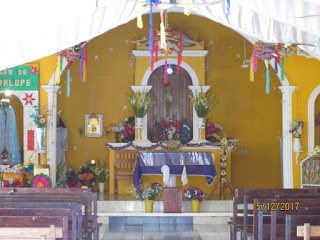 As I walked back I stopped and looked in the old Catholic Church in the city square. It was beautiful. I took some pictures of it. It was all dressed up for Christmas.  I stopped in a small Grocery Store / Mercado on the way back to the hotel. The farther south I go the more motorcycle repair shops I see.  Oh oh, is that a bad omen about the quality of the roads to come? 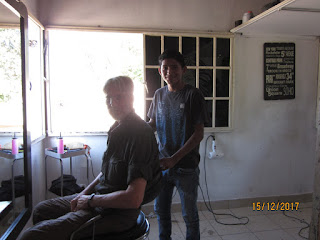 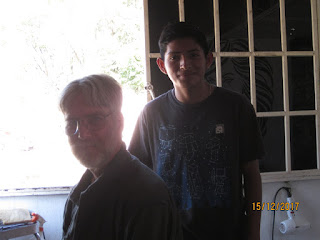 When I got back to the hotel, Anna the receptionist asked if I was going to get my hair cut. WHAT?? I wasn’t planning on it. She said, we go now. I take you to the salon. Did I really look that bad? I had a feeling this was going to be another adventure. Off we went to the salon. She talked to the ladies in the salon and they had no interest in cutting my hair. So she asked if they knew where the barber shop in town was. They kind of did but just pointed to the other end of town. So off we went looking for the barber shop. Anna stopped four times to ask different people before we found it. Most of the people knew about it but not for sure where it was. We finally found it with two young guys cutting hair. Of course, Anna supervised my hair cut. I told the both of them more hair on the floor is better than less. They thought that was pretty funny. I got a hair cut and my beard trimmed for about a $1.60. It doesn’t look too bad. So, off we went back to the hotel.

The rest of the day I worked on my blog and finished up some final preparations to cross the Mexican / Guatemala border. Of course, I’m thinking the worst. You read all these horror stories all over the internet and your mind runs wild with all the problems you can have crossing international borders. My plan was to be up at 4:30 a.m. and out of the hotel by 6:00 a.m. I was hoping to get to border before it gets so busy it takes 5 hours to get through it. I went to bed.