13 December 2017 – I ate a hearty breakfast, loaded my bike and departed for the bank. I stopped at two banks Bancomer and Banamex and inquired about purchasing Guatemalan Quetzel. It was a quick no from both banks. So I got back on my motorcycle and left town heading toward the Guatemalan border. I can tell you that Tuxtla Guttierrez is a large town and very modern. Everything was there: McDonalds, Domino’s Pizza, Holiday Inn, Marriot Hotels, Walmart, Sam’s Club, several very large plazas / shopping malls and God know what else I didn’t see. I was on the Autopista and it still took about an hour to get out of town. 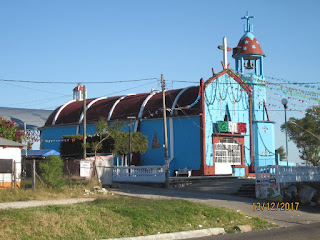 Once I got out the city and driving South on Mexican Hwy 190 it was like driving through the South Dakota Black Hills. The pine trees looked the same. Some town I was driving through had a blue Catholic Church. I thought it looked nice and took a picture of it.

I stopped in another town, Las Margaritas, about 37 miles / 60 Kilometers from the border. I stopped at another Bancomer Bank and asked about Guatemalan Quetzel. Again, the big no. Although the lady said you could purchase Quetzel and gave me a location downtown. Not an address, but a location. Just at that time a gentleman walked up and said “may I help you?” I said I was inquiring about purchasing Quetzel here at the bank. He said “you’ll have to purchase that at the border.” I showed him the location the lady gave me and he told me how to get there. He was a nice guy, spoke good English and was a tourism pilot. He flew tourists over or through some scenic area for a living. I don’t know where though. So, off on another adventure.

I drove in to town per the pilot’s instructions. I was waiting to make a right turn and this guy walks up to me and says he’s a biker and would like me to come into his restaurant to eat. It was 3:30 p.m. and I wanted to purchase Quetzel if it was available. He said he rode a 1200 BMW. I declined his invitation to stop in and eat. I was under time constraints getting to the border. It was mostly mountain driving with switch backs and I did not want drive mountains in the dark. He said the border didn’t have any quality hotels so you might as well stay in town. A tempting offer, but my goal was to be at the border today. I finally had to say, I must leave Sir, shook his hand and left. I almost had to be rude to get away from him. In a different situation I would have taken him up on his invitation to eat with him but today was not the day.

I did find the location of the money changer. Imagine that. I didn’t purchase the Quetzel because of the poor exchange rate. I’m going to the border with no Guatemalan Quetzel and that scares me. I will have to deal with these money changers and I have heard they will swarm on me like bees. 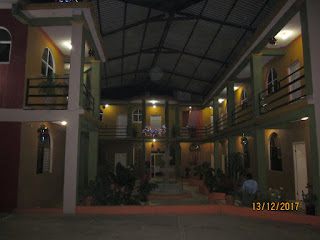 The last 3 miles / 5 Kilometers was road construction into Ciudad Cuauhtemoc. It would have been horrible if I would have driven that in the dark. I arrived safe and sound and stayed at Hotel La Benediction De Dios. It was a nice hotel and especially looked nice at night with all the Christmas lights. The best thing about it was the Wi-Fi. It was better than some of the more expensive / fancier hotel I have stayed in. You didn’t even need a password to use it. Anna, one of the ladies who works here was quite helpful. I got a couple extra blankets because it does get cold at night. There was only a sheet on the bed when I checked in. A good day all in all. I went to bed.
Posted by Beauty at 11:34 AM