29 November 2017 – I woke several times during the night and checked the time. Disembarking was said to be at 8:00 a.m. but I also heard 9:00 a.m. I got up at 7:00 a.m. and checked out the free breakfast. It was a roll and a cup of coffee. I took the roll and skipped the coffee. I looked out on the deck; nothing much happening there. So, I took my roll down to my room and ate it. I went back to sleep till I heard one of the winches or something grinding away. A sure sign we were in port. I jumped up, put on my clothes and checked out of my room. I turned in my key and got my driver’s license back. Leoncio said something to receptionist, which hurried up the return of my driver’s license. I think the receptionist said that my cabin had to be checked to make sure the sheets were still there before they would give back my driver’s license. I don’t know what he said, but it helped out.

We waited probably another hour before we were allowed to go below deck and undo our tied down straps. I was the last one in line so I had to hurry to get all my straps undone. I figured as a last resort I would put all my straps in one bag and then drive out like that. I didn’t want to hold anybody up. I know Javier and Leoncio wanted to get going. All the rest of us can take it a little slower. As it turns out all the semi-trucks unloaded first and then they let us disembark. I had enough time to get all of the tie-downs rolled up and bagged. 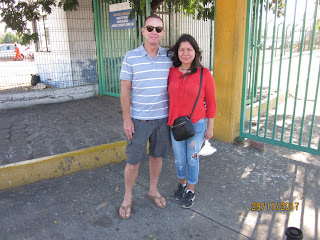 Once the trailer pulled out alongside of the motorcycles and opened up some space, the motorcycles were gone, and I mean fast. I got my motorcycle turned around and waited my turn. When I got waved out, down the ramp I went. I drove out of the port and when I got out, there sat Mike and the unknown Harley rider. I pulled in there and dialed in my GPS. Once I got my coordinates typed in and everything in its appropriate place, I was ready to go. I man and a woman walked by and commented on my motorcycle. He was from Canada and she was from Los Angles, California. We talked some about traveling with a motorcycle etc. etc. Then I asked them how to get to Hwy 15. They pointed it out, I thanked them and I was off. 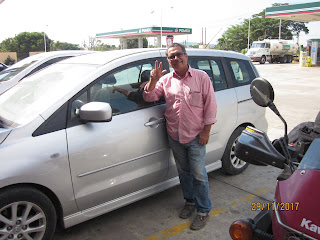 Blanche was steering me in the right direction. My plan was to get out of Mazatlán and get a hotel in El Rosario. Traveling to El Rosario was pretty uneventful. I stopped in OXXO convenience store and bought an apple and water. While eating my apple outside the OXXO convenience store, Rufino was looking at my motorcycle. My GPS coordinates didn’t put me on location. So, I was not at Hotel Bellavista. I showed him the address and he pointed out the rough location of the hotel. I was only a stone’s throw from it. We talked some more and I kind of surmised he was an educated person. In his best English he said he worked in Marine Biology. In what capacity I don’t know. I gave him my blog cards and he gave me
his name, telephone number and e-mail address. It probably took me 30 minutes to find the street to the hotel. When I found the hotel, I didn’t like the hill I would have to climb to get there. So, I abandoned this hotel for another that Blanche found for me.

I checked in, unloaded my motorcycle and started working on my blog pictures. This hotel had really good wi-fi which is always nice. I also got my tie down straps in their appropriate place, Skyped Mary, charged up my camera battery, planned my next day and had a nice supper. I also had a nice Christmas tree in front of my hotel door. This hotel had a lot of nice Christmas decorations, including a Christmas tree and Nativity Scene. One large and one smaller one. Something I never expected to see.

While I was unloading my motorcycle, this guy came riding up to me to look at my motorcycle. He then showed me his leg below the knee. He pulled the bandage down and I could see a stainless-steel screw coming out of his leg. Then I saw the 10 Inch / 25 Centimeter long scar in the front of his leg. Whatever happened to him, it was bad. Then he showed me some antiseptic he had purchased and was hinting it was expensive. The long story short he couldn’t work and if I had any spare pesos he’d be grateful. I gave him 100 Pesos and he was gone like a shot. I hope he didn’t spend it on booze. I gave it to him with good intentions. Oh well………….
Posted by Beauty at 4:06 PM