23 December 2017 – The first thing I did when I woke up was grab my GPS and get my route around San Salvador City planned out. I was having problems avoiding the PanAm Hwy CA-1 going through the city. This is a huge problem. I was also having problems finding cities on the PanAm Hwy I could search out with Blanche. She couldn’t find the city I wanted. I changed my mind and decided to ride South of the San Salvador City and drive the route Litoral Hwy CA-2. The cities I have to drive through are much smaller. Once I decided that, I could find the two cities Blanche could navigate to and plan a route to. Blanche bought into it. So, I was good to go.

I loaded up my bike and was out the door by 9:00 a.m. I rolled up the door and the security guard was waiting outside. Why haven’t you left by 7:00 a.m? Without Wi-Fi my Spanish translator doesn’t work. Because we couldn’t communicate he finally left. I thought of something I could tell him that would answer any questions he has. I told him the tall lady from the night before said it would be ok if I stayed until 9:00 a.m. He seemed happy with that and I left. It’s another case of information not being passed on.

I got back on the PanAm Hwy CA-1 four lane heading toward Litoral Hwy CA-2. Along the way, Blanche pull a quicky on me. She found a shortcut road to Litoral Hwy CA-2. As I drove it, I was actually paralleling the newer four-lane South to Zacatecoluca. I couldn’t get off the two-lane road to get on the four-lane road. I was not happy about this. I eventually came to a road that allowed me to access the four-lane CA-2 Hwy. Blanche literally rebelled all the way. I told her to go pound it. Most of the day I drove between 45 to 60 Mph / 70 to 90 Kph except for passing through Zacatecoluca and Usulutan. Blanche wanted to drag me to another shortcut road again. This time I was ready for her and didn’t let her. She again rebelled all the way but I didn’t care. I’m going my way. 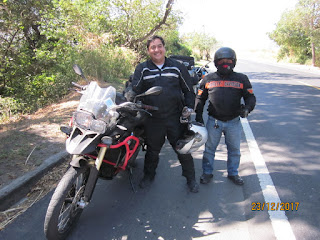 I was riding along about 55 Mph / 90 Kph when this new Adventure BMW 1100cc and Harley- Davidson Dyna-Super Glide or Wide Glide (????) pulled up alongside me. They asked me to stop. So, I did. They got off their motorcycles all glad to see me. They asked me to ride with them but they were riding way too fast for me. They wanted to cross into Honduras today. I’m sure it was because of Christmas and the border may be closed. Before we parted ways, we took pictures and they gave me a sticker of their motorcycle riding club. They were from Mexico City, Mexico on their way to Costa Rica to see a friend. 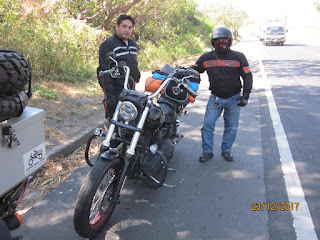 I stopped for the day in La Union. The hotel I wanted to stay in was closed down so I’m downtown / El Centro, in the Puerto Bello Hotel. It’s an interesting place. They have some retired people rooming here. I think working girls may frequent the place, and also some wayward travelers like myself. I had them clean the bathroom because it smelled bad of urine. The bed has small ants crawling across it. Every once in a while, I have them walking across my computer screen. I hope they haven’t infested my computer’s internal workings. I oiled my chain and I did some checking on the Honduran Border and went to bed.
Posted by Beauty at 9:54 AM