Crossing the Border, and a Visit From Montezuma - 16 December 2017 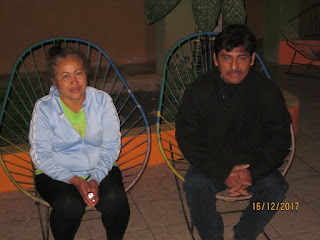 16 December 2017 – I woke up once during the night to a rooster who didn’t know it was 3:30 a.m. I looked at the clock thinking I was glad I didn’t have get up yet. All to soon 4:30 arrived. I loaded my bike, took a picture of Anna and Julio and said goodbye. They unlocked the rolling gate and let me out. I was off to leave Mexico and enter Guatemala.

I went the back way out of the hotel up to Mexican Customs and Immigration buildings and when I got there all the building were dark. Not a good sign. I should have check the hours of operation yesterday when I was across the street from them eating breakfast. I didn’t think of it. I thought to myself, “Customs and Immigration must be up by the border.” I ride the 2 miles / 3 Kilometer up to the border. I get there and the road turns into a Y. Everything is written in Spanish. The only words I recognize is bathrooms / banos. So I take the right lane /arm of the Y. I drive down this road and it’s starting to look like this road is for trucks. I don’t see any cars. I turn around and go back to the left lane /arm of the Y. This looks like it’s a one-way street and I’m going in the wrong direction. I turn around and I drive out. I get back to the Y, and in drives a car and a pickup the exact same way I just drove in. So, it must be two-way street into the border crossing. I followed these vehicles in and they eventually stopped at some vendors alongside of the street. I pass them all up and arrive at the border. 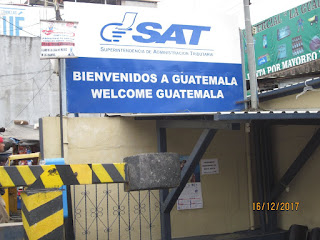 At the border, there was one those international orange cones setting in the middle of the road in a wet spot and an individual flagging me down to stop. I did and he requested my paperwork on the motorcycle. In about 15 second he sprayed something on my motorcycle to fumigate it. I'm not sure what they are trying to prevent hitching a ride in from Mexico. Hence the reason for the wet spot.

I went in the office with him and he filled out the paperwork, made copies and updated his computer on my entry. He then presented me bill / fee of $11.00 Quetzal / $1.50 dollars. I told him I didn’t have any Quetzal and he motioned in a money changer. I told him I had 4000 Mexican pesos to change. The money changer pulls out a stack of money over 5 Inches tall / 13 Centimeters. The money changer offered me 1400 Quetzal and I counter offered him 1500 Quetzal. He did some quick math and said that was ok with him. That left him with about $5.00 dollars / 35 Quetzal profit.

I paid the Fumigation Official and he then told me to go to Immigration. I rode my bike over maybe 10 yards / 10 meters and parked it. I had to wait about 15 minutes for the office to be cleaned and one of the Immigration officials cordially helped me. He brought over the forms for me to fill out that were in Spanish and English. Something still wasn’t setting right with me about this whole situation. I finally asked “do you stamp my exit from Mexico?” He said, No and then said, you have to go back to Mexican Customs and Immigration in Cuidad Cuauhtemoc the city I just came from. No worries it’s a short ride from the border back to Cuidad Cuauhtemoc.

I get back to Customs and Immigration in Cuidad Cuauhtemoc. You guessed it, the building are still dark. I checked the time they are open. Can you believe this? 9:00 a.m. is the opening time. I was wondering why I was there at 6:00 a.m. I think the person handing out my information might not have been in the know or wanted me there early enough so I don’t have to stand in line. Just at that time a 30-some year-old Hispanic women came walking up to me speaking English. She was the same women I saw at the hotel earlier. She said she was told by Anna to be at Customs and Immigration by 5:30 a.m. She thought that was weird because they don’t open till 9:00 a.m. Well, we were facing a couple of hours wait until the Customs and Immigration Officials show up. She went around pounding on doors and found a guard who said one or more officials may be here by 8:00 a.m. That was questionable and so we waited. I found out she was from Guatemala and was hooking up with her boyfriend from Quebec, Canada. I asked her what her occupation was and she told me she was a professor at some university and her boyfriend was a student of sorts. That wasn’t clear. The only reason I asked is her car was a one or two-year-old Volkswagen vehicle with no door dings, scrapes, and had good tires. This is not unusual but it makes you wonder what her station in life is. I bet if you pursued it there’s a story there.

Well anyway, sometime after 8:00 a.m. the doors opened up and Immigration began receiving people. We have been there now for two hours plus. A car drives up just as I was about to walk in and get my passport stamped. The guy raced to the door and I thought this sucker is going to cut in line in front of me and I’ve been waiting here two hours. Much to my surprise he opened the door and let me in. Getting my passport stamped was quite uneventful. Even going through Customs was uneventful. They checked my Mexican vehicle pass to my Vehicle Identification Number. Everything checked out ok so she let me go. My Mexican vehicle pass is good for six months so they didn’t cancel it. I still have to get my motorcycle checked out of Mexico after the six months expire or I can never bring that motorcycle back into Mexico. I heard stories of it costing $600 to fix the problem if you ever want to bring the offending vehicle back into Mexico.

So, I’m off to the Guatemalan border again. I was waved threw the fumigation station right to Immigration. Again, the same cordial gentleman helped me with my passport and immigration forms. Everything went well, I got all the I’s dotted and my name signed in all the correct places. I was then directed to Customs to have my motorcycle imported in to Guatemala.

There was a customer at the window who took a rather long time. I waited. A British couple showed up while I was waiting. They were leaving Guatemala with their van they had purchased in the U.S.A. They had been traveling for a year in Central and South America. She said she worked in education and I’m not sure what he did. They may have saved money by sleeping in their van. They had a full-size Dodge Ram Van which they purchased in California. I know they made it to Argentina and I didn’t hear it was a mechanical nightmare so it must have ran ok for them. Eventually, the customer in front of me was finished and it was my turn. I handed all my motorcycle paper work to the Customs Official. He took it and checked it out. Everything was in order and he preceded to fill out the Guatemala paperwork I needed. It went pretty smooth except he didn’t quite understand something about my license plate. So I dashed out, pointed at the plate and everything was ok. He required a $22.00 Dollar / $160.00 Quetzal fee. I had to go to the bank next door, only about 7 Yards / 7 Meters away. I paid it and returned to the window to get my copies of the forms.

I request copies of all my forms in case I get stopped by corrupt police officers and everything is confiscated. That way I would still have the originals. Initially he didn’t want to make these copies but eventually he did. He said I was finished and could go. Praise the Lord I’m out of here! I get everything securely put on my bike. My bike is setting on an angled surface which lends itself to some unstable situations. I can’t wait until I can use those tires sitting on top of my bike and get them off there. 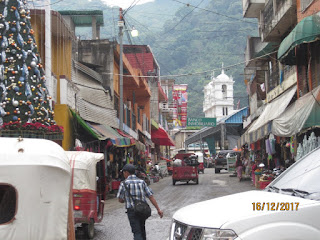 I left Customs and Immigration looking for the town of La Democracia. I’m looking for Hotel Valle Occidental in this town. It looks like a better hotel from all the ones I saw on the Internet. Getting out of that border town area is quite a trip. Between people parking anywhere available, 3 wheeled taxis zooming in all different direction, trucks too big to turn corners that were constructed for horse and buggies, and motorcycles the vehicle of choice for getting in and out of tight spots fast. I only had to drive 10 miles / 15 Kilometers to the hotel. 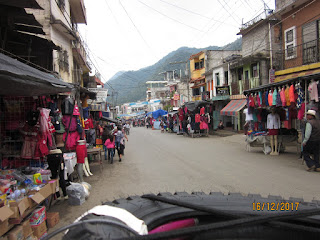 I pulled into a restaurant thinking it was part of the hotel. The hotel was across the street. While I was at the restaurant I ate breakfast. The usual, of course. When I finished I drove over to hotel and got a room. $16 Dollars / 115 Quetzal not a bad price for a room. KOA tent sites cost more than this room.

The price was good but the room had a very moldy smell. I mean bad. I don’t think it had been rented out in over two weeks. The towel looked flat on the bed, the soap was sunk into the towel, and the bedspread was showing the high and low spots in the mattress. Kind of like bedspreads in the castles in England. I thought if I ran the fan all day with the door open the smell would lesson. Not really. I worked on my blog most of the afternoon until 7:00 p.m., updating everything for Mary. 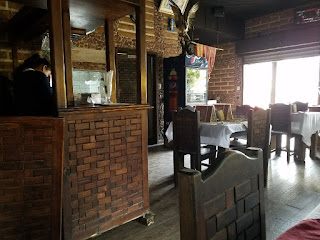 I then went to the hotel restaurant for super. It was a good meal and I enjoyed it. I asked for a bottle of water and they brought me a glass of water from their filtered water cooler. I thought it would be ok. I ate everything and came back to the room and continued working on my blog. When I first laid down to sleep my head was up by the headboard. I start sneezing profusely, just nonstop. Finally, I turned the fan on to full speed and slept with my head at the foot of the bed under the fan. I stopped sneezing and was able to sleep. By 10:00 p.m. Montezuma’s Revenge had set in. First the commode and then the barfing. All my supper went down the toilet. It was restless night not knowing when Montezuma would come calling again. I hope I don’t have another repeat episode of that again. It kind of reminded me of when I was in the Country of Laos and developed food poisoning. The same symptoms. I took my anti-diarrhea pills and my stomach seems to have settled down now. It hasn’t been doing that constant churning anymore.
Posted by Beauty at 11:59 AM