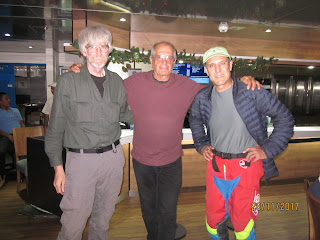 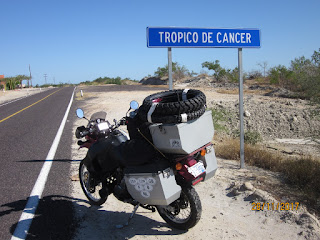 28 November 2017 – I intentionally got up early this morning because I had to get moving. I had to be at the La Paz-Mazatlan ferry port by 5:00 p.m. I ate breakfast, loaded my motorcycle, checked out of the hotel and was gone by 9:30 a.m. According to Google Maps, it was to be a 2-1/2 hour trip but for me it took more like 4 hours. I went back Hwy 1, the same way I came to San Jose del Cabo / Cabo San Lucas. I stopped twice to take pictures; once at the Tropic of Cancer, and the other at an 1800’s church. 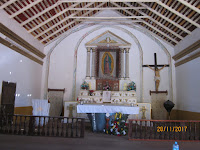 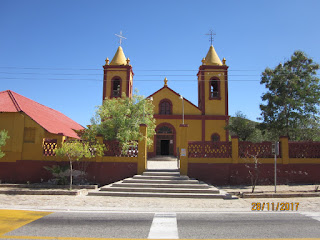 The best I understand it the church was built by a mining company. I don’t know the history of the mining company or what it mined. It was a beautiful Catholic Church that has fallen into disrepair. If you look at the pictures, everything looks nice but in reality, everything from the 3 alters, walls, doors, church pews, and outside yard need serious work. It has a tin roof on it.

Can you imagine if during church services it started raining?  You probably couldn’t hear the
priest for the rain hitting the roof. 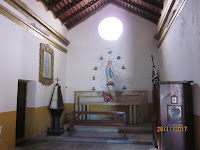 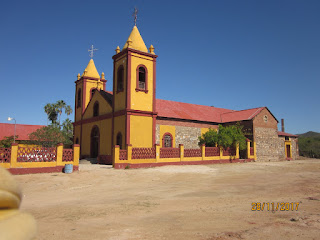 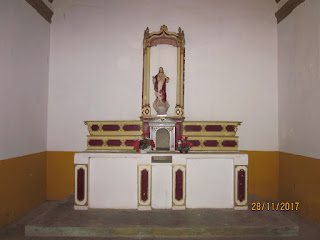 To this day Blanche continues to mystify me. I was driving up Hwy 1 back to La Paz, Baja, Mexico to the ferry port. It was the exact same road I drove south on and that darn GPS continually tried to get me to drive Hwy 19 into La Paz. She wanted me to drive unmarked / unpaved roads. After the church she finally gave up and started tracking on Hwy 1. I entered the outskirts of La Paz and needed to stop for a drink. I also reprogrammed Blanche to guide me to the ferry. For once in her life she picked the perfect road. It was two lane, freshly paved blacktop road. It skirted around the city, strictly truck traffic, and right to the port. No city driving at all. 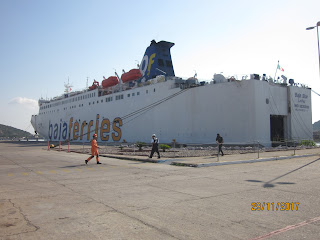 I was met by an individual standing inside the port gate checking tickets. At this time, I didn’t realize just how import these tickets were. He directs me up to the Customs and Immigration station. I was met by these custom officials, a man and a woman. The man walked off and the woman asked for my tickets, the title to the motorcycle, and my permit to drive my motorcycle in Mexico. I go into my top box and dig them out. I take out my green folder and unzip it, open it up, and the woman was just amazed at the organization. She was just shocked. She couldn’t believe each folder was marked with a label. I don’t think she ever saw that before. I gave her my title and she checked the serial number on my bike. Then she asked for my permit to drive a U.S. vehicle in Mexico. After some hunting in my perfectly organized madness, I found it. She was elated and ran it through her scanner and it came up good. After that she said I was good to go. She pointed in the direction to go and walked away.

I pushed my motorcycle out from under the roof, out of the way of incoming vehicles and parked it. I went back and packed up my paperwork and put it in my top box, hoping I wouldn’t have to dig it out again. I drove to the next station waited in line until the trucks were finished, then drove up. The guy gets this look on his face thinking “this guy doesn’t speak Spanish, here we are again.” He asks for tickets, and I didn’t immediately recognize the word tickets. It was getting loud. Then another guy walks up and said, tickets. I immediately get them out for the guy doing the writing. He takes them, does whatever, gives them back and waves me on in the direction of the ferry.

So, I drive around over to the ferries and was waved off. It was too early and was told to come back after 5:00 p.m. I went to the ferry office / terminal and again was directed to an office inside. “Can I see your ferry tickets?” I gave them to the girl. In Spanish, she said “you’re missing a form”, then an English-speaking girl comes in and says “you’re missing this form.” I said that I was never given that form. She said, you have to go back and get it. I asked if she could write the name of the form I was missing, and she did.

I walked back to the station that was to provide me the form and showed him the note the girl wrote. He said that I have to bring my motorcycle back so he can see the license plate number. I’m sensing he’s not happy. I go get my motorcycle and back it into the parking spot so he can see the license plate without having to walk into the sun. I wait a couple of minutes till he finishes up his other paper work and ask him to fill out the form for my motorcycle. He does begrudgingly and I go back to the ticket desk in the terminal. I give them my passport, tickets and form. Eureka, everything’s good! I get everything back and prepare to wait the next 3 hours.

On my way upstairs, I see this woman leaning her bicycle up again the stairway. I asked where she was from. She said Quebec, Canada. I mention I had met another woman Lareto, Baja from Germany who was riding bicycle. I said she had been on the road now for 3 years. The woman from Quebec asked if she had dreadlocks. Surprised, I said, yes, and her name was Carmen. The Quebec lady had also met Carmen. Small world. 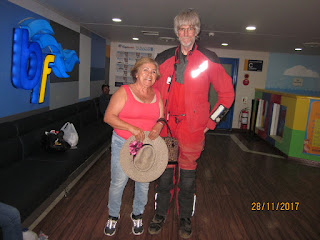 On ship, I was stopped by a petite woman and her daughter.  They couldn't believe how tall I was.  I'm just over 6'2", so not the tallest American by any stretch of the imagination.  But they thought I was something and wanted to have their picture taken with me.  Notice the woman next to me is standing on her tiptoes. 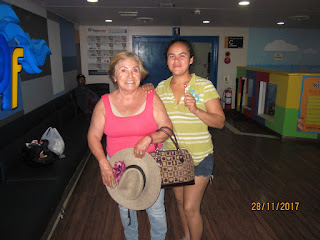 I continued to the 2nd floor, the restaurant area, and found a chair.  I was sitting there for about 15 minutes and I see this American. I waved to him and he comes over. He introduces himself as Mike. He’s from Vancouver, British Columbia, Canada. We talked for the next 3 hours about motorcycles, travels, fishing and family. I’m not going to kid you, Mike can talk.

Six o’clock rolls around and it’s time to get on the ferry. The Harley-Davidson, Mike’s Yamaha, and my Kawasaki head toward the ferry. We have to wait our turn as the semi-trucks and trailers have priority. The ramp into the ferry is about 30 feet / 9 meters high and 100 feet / 31 meters long. When it was my turn to go up, I was on the gas and had to kick ass to get up that ramp. I don’t even want to think about if you stalled your bike on the way up. Also, the ramp was kind of slippery with the oil dripping from all the vehicles going up and down. Anyway, I made it up ok and was directed to my parking spot up against a bulkhead behind Mike. We all had to strap our motorcycles down so they don’t tip over in rough seas. The guys working in the hold helped anyone needing help. If you didn’t have tie down straps you could use the ferries’. I used my own and mostly anchored the bike myself. Anchoring my motorcycle is kind of a touchy thing with me. I never want any tie down straps touch my gas tank or pulling on my saddle bag. Both of these items could be damaged by cracking my plastic gas tank or bending the saddle bags or their mounting hardware. I would go right thru the roof if that would happen.  The smell in the truck and car parking area inside ferry has a heavy oily smell. It was like the worst humid day with heavy oily smell. I needed some fresh air.


I was the last one getting my bike anchored down and a Customs Official stopped over to check on me then left. So, I was happy with my tie down and gathered up my stuff going upstairs. Guess who came back to check me out again? The friendly Customs Official. He wanted to see my passport and tickets. I must have been taking too long.  He then checked out my helmet that I was carrying my water, apple and banana in. He then said to go upstairs. I crossed thru a steel bulk head and up an escalator to the reception area. 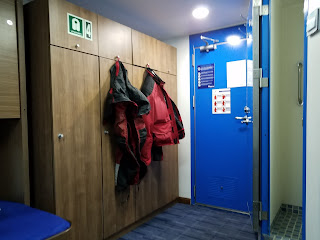 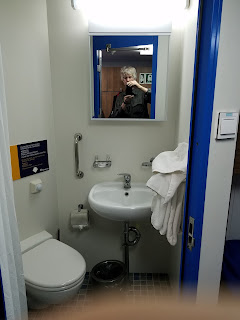 I had a state room / cabin so I needed to speak with reception about a key. Thank god one of the guys at reception desk spoke some English. He spoke enough to ask for tickets and a form of identification. Well I wasn’t going to give him my passport so I gave him my driver’s license, the absolute last thing I wanted to do. He said it was secure and not to worry. I prayed it would be there in the morning. One of the cabin stewards showed me to my cabin. He told me how to turn on the lights, showed me the head or bathroom, where the life preservers were, then left. It was a nice room and everything was clean. Spotless. 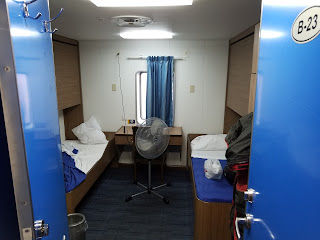 The first thing I did was get the fan down and get it running. My red riding suit was soaked with perspiration and I wanted to get it dried out. I hung it up and directed wind toward it. I ate my banana and laid down for about an hour. I heard supper was being served so I went upstairs and checked out the restaurant. There was a 50+ person line waiting to get served so I walked out on deck. Imagine that, there stood Mike the only guy I knew and 3 other motorcycle riders. I later found out their names in a round of introductions. 1.  Javier “El Chief” 2.  Leoncio “Cuco” 3.  Yamaha Mike 4.  Martin from Canada. We made some small talk and I went and sent a Spot to Mary. 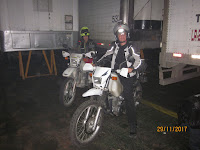 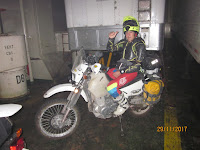 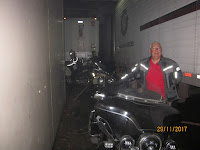 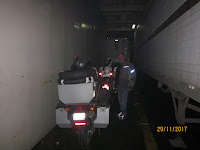 When I finished with that I was going to get line to get something to eat. Rumor had it they were running out of food. I got in line with Javier and Leoncio. As we slowly moved along we talked about our motorcycle travels and I showed them some old pictures I carry with me. Most of the pictures are ten years old but they’re good ones. I also told them I was a machinist and showed them some pictures of the projects I use to work on. By this time, we had arrived at the serving line. That food was looking good. I requested tuna/spaghetti hot dish, refried beans, rice, jello cup and a bottle of water. The payment: a copy of your ticket. We all three sat down together, ate, talked more about ourselves and motorcycles. I told them about my travels around the world and a website to visit with more info about flying motorcycles to different countries. 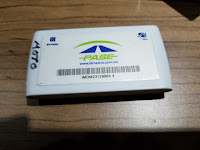 They told me how to safely travel in Mexico and Javier told me about PASSE to use on the toll roads so you don’t have to pay at every toll booth.


Very similar to what we have in the United States. Javier told me he was a very successful business man and an avid motorcycle rider in the dirt and on the highway. Leoncio like riding motorcycle in the dirt and enjoys photography. He also helped me out translating several times which I appreciated. I am glad I met these two men and appreciated their advice. 10 p.m. came pretty fast and we all went to bed. That bed sure felt good.