Preparing to Take The Plunge Into Guatemala - 12 December 2017

12 December 2017 – I got up with the intention of ending up just shy of the Guatemalan border. I decided to eat breakfast thinking the next two days may be a little stressful and I didn’t want to be hungry. While I was eating I got to thinking I might need some Guatemalan currency. So, I asked at the receptionist desk if they knew of a bank where I could purchase Guatemalan Quetzal today. They said there’s only one bank open today and that is Bancomer Bank in the Plaza Cristal. They said it was about 1-1/4 Miles / 2 Kilometers away. I sat down with my cell phone and start going down the road till I found it. It was right next to the Holiday Inn so I knew I could find it. I drove right by. It’s really hard to look for a building or anything when the traffic is flying by you or is stopping in front of you. I hooked a u-turn and went back to take a second look. I found it. It was right next to the Holiday Inn like I saw on Google Maps.

I parked my bike in the car ramp, not thinking anything about it. Then I noticed all the motorcycles were parked everywhere but in car spaces. I was a little worried that some well-meaning person might vandalize my motorcycle because it was occupying a car space. They are out there. I walked into the Cristal Plaza / Mall and walked around some. I wasn’t seeing a bank but I did see a Security Guard. I asked him if he knew where Bancomer Bank was. He walked me outside and pointed out the location of the bank. I walked by the bank and looked in. The ATM’s were operating but the actual bank was closed. It was a Mexican National Holiday. The Virgin of Guadalupe Day.  Apparently, the Virgin Mary appeared in the year 1531 and instructed the Bishop to build a Cathedral somewhere near Mexico City and he did. So that’s why the bank was closed and it was a national holiday. 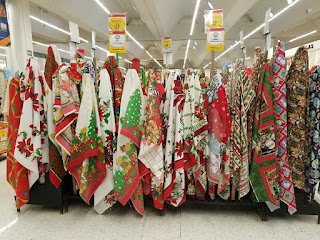 As I was walking around the outside of the Cristal Plaza I saw a Grocery Store / Mercado and I went back in. It was a huge grocery store. I asked one of the stockers if she knew where the peanut butter was. She had to ask around and we eventually found it. I got another 1 pound / 462 grams jar of it. I also picked up some more apples. As I was staggering around the store I saw some Christmas fabric I thought Mary would like. That way she could create a Christmas quilt. I texted her some pictures of the fabric and the price. She thought the fabric was pretty and fairly reasonable. I continued walking through the Plaza until I found an exit out. I stopped by the Banamex Bank and purchased some pesos.

I drove back to the hotel and I decided to check out why my headlight has been just being a pain in the butt. It works off and on. Earlier this spring when I was preparing my motorcycle for this trip I installed a heavy duty headlight wiring harness. I’m thinking the wire used in the wiring harness was 16-gage. The reason I installed this wiring harness is I went from a stock 55/60-watt bulb to a 55/100-watt bulb. That 100-watt high beam bulb lights up the highway real nice. If you run the 100-watt bulb with the stock wiring harness you’ll burn the wiring harness out of the motorcycle. Hence the heavier gage wire. The down side of the heavier wire is it not as flexible as the stock wiring harness. With all the shaking while driving these rough and pot holed roads the 3-blade female connector keeps working itself off the bulb. While it’s jiggling around it’s constantly arcing and eroding the connectors. I unhooked the heavy-duty wiring harness, removed the 55/100-watt light bulb and re-installed the 55/60-watt bulb. I then hooked back up the factory wiring harness to the bulb. I made sure all the connections were nice and tight. If I ever repair the heavy duty wiring harness I could substitute the single 16-gauge wire with multiple strands of lighter gauge wire, which would allow the wire to be more flexible. I spent about 3 hours switching those bulbs and wiring harness back to the factory set up.
Posted by Beauty at 11:25 AM