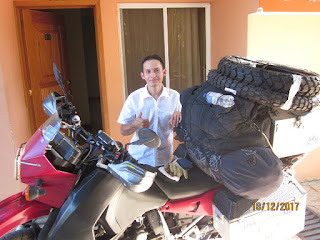 18 December 2017 – I got packed up and left the hotel. I said goodbye to the cleaning guy. He got there early just so he could say goodbye to me. We made some small talk through my cell phone. He told me he wanted to come to the United States and make lots of money. I felt sad for him. It seems unlikely that he will go through the legal immigration process, and if he came in illegally, then who knows how long before Customs and Immigration catches him. He will for sure be deported back to his country. Remember the college professor I met at the Mexican and Guatemalan border? I think she was trying to get out of Guatemala to Canada: just my own thoughts. So, anyway I filled up with gas before I left town. 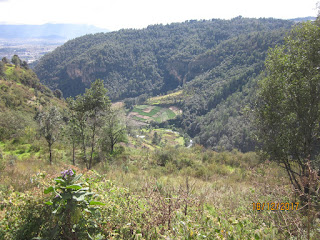 I thought I would be riding semi-decent roads once I left the hotel. Not so. It was one small town after another. That went on for 20 or 30 miles. I don’t think there was ever more than 2 miles / 3 Kilometers between towns and that went on and on and on. To add to that, every little town had a least 5 or 6 speed bumps along with broken pavement and pot holes. Someone told me Guatemala doesn’t have any speed limits so they put speed bumps through the towns to slow down traffic. After driving all day, I might believe that. They are the most annoying thing about this trip.

I finally saw a restaurant I could pull in to and park. Most of restaurants have an 8 to 10 Inch / 20 to 25 Centimeter drop off when you leave the pavement to the dirt. With my top heavy bike, that is difficult to navigate. So I look for restaurants that are easy in and out. This one was easy in and out so I stopped and ordered my usual Huevos Rancheros. Initially I had difficulty talking to the waitress but once we got the translator thing going my order went right through to the kitchen. The food was great and I tipped her on the way out. 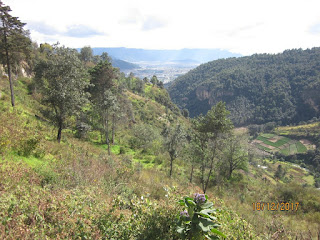 I got back on the road and drove until my butt needed a break. I was driving mostly mountain roads with switchbacks, broken roads and speed bumps. You’re not idling your brain while you drive these roads. Everybody is on the gas and kick’n ass. It’s in your best interest to keep that in mind while you drive. 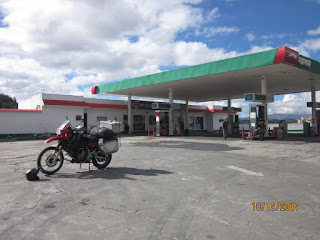 I pulled into a gas station to take a break and get a drink. I was only going to be there for 5 or 10 minutes. I never even got off my bike until I saw what I thought was a picture moment. I checked my bike to see that it wouldn’t fall over and got off. I walked over to where I was going to take the picture and was looking around. The next thing I heard was CRASH! My bike had fallen over. I tore over there knowing I couldn’t lift it up. I whistled at the gas station attendants to come help. The three of us couldn’t lift it up. While it was laying on its side the gas cap was leaking gas. The third guy left to go pump gas in a car leaving me and 2nd guy to lift this bike. I pulled the tires and the bags off the bike as fast as possible because of the leaking gas. Once the heavy bags were off we lifted the bike back on its wheels quite easily. I remembered that this crap happened to me in Russia. That time, it was setting just fine. I changed oil in it and turned my back on it to move the drain oil. The next thing I hear is CRASH! In that case I had to unload the top box and one of saddle bags to get it set back up. God that ticked me off. 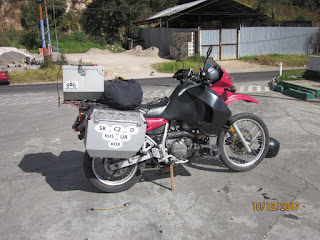 Once we got it set back up I started putting my bags back on. Then I thought maybe I better check the controls to see if anything was bent or broken. I went to start the bike and it started a little hard but started. So, the carburetor didn’t get messed up. I could see the mirrors were messed up and then I tried the clutch lever. The guard covering the clutch lever had bent, interfering with the clutch lever. I pulled my tools out of my saddle bags and removed it from the bike. I’m glad that handlebar guard was made of extruded aluminum. It's soft and gummy and easily bent. I had to shorten it and take the twist out of it. Right where I was working, I found an old mud flap off a truck. I used that to protect the aluminum and the plastic guard from the concrete. I probably put that guard on and off the bike ten times before I got it fitting correctly. Getting the twist out of it was the most difficult. I used my vise grips and adjustable wrench to get the twist out. Then I had to hammer on it some. It still was too long so I bent the end a little more and tried it out. It fit almost as good a new, but with the wrench and hammer marks it’s not as pretty. The clutch lever is free inside the guard, whereas before the little ball on the end of the clutch lever was binding. Everything still cleared the gas tank also. I was afraid the handlebars might be bent and interfere with the gas tank. The saddle bags got some new scratches as well as the plastic handlebar guards. It doesn’t make me happy but at least I was able to reasonably straighten it out. Before I put my bags back on I took it for a test spin in the parking lot. Everything seemed to work ok so I loaded it back up and took off. A lot of fun for just wanting to stop for a drink and give your butt a rest.

I saw the size of the city San Cristobal so decided to drive in and see if I could find an ATM. I spent a lot of time driving around in the city center and not finding it. So, I tried a 2nd location and ran into the same problems. I didn’t find either of them. A lot of monkey business. So, I had Blanche find me a hotel. She takes me over hill and dale. I’m sitting there waiting to get on Autopista and said to myself, I should just go to that hotel I see right there and skip going to the hotel Blanche is taking me to. But, I followed her directions and down the road we went 1 Mile / 2 Kilometers hooked a u-turn and returned to the same hotel!  Some days I would really like to kick Blanche in the butt and today was one of them.

I pulled into the Auto Hotel. I’m looking for the office. I can’t see it. I hear people talking but can’t see them. Finally, I found them. They’re up one story and hollering at me. They were speaking Spanish which I couldn’t understand. I was the biggest fool in their eyes and they were laughing and carrying on.  Dumb Gringo! Finally, I got them to come down to where I could communicate with them. They did have a room more expensive than I wanted but it was close to 5:00PM and I wanted to get off the highway. True to form, the dudes can only talk but not think. Finally, the women and I started communicating. I got the room price nailed down, paid for it, and got a receipt. She wasn’t that hard to work with. It’s a nice place that doesn’t smell like mold. She gave me an extra blanket so I’ll be warm. I must leave at 8:00AM. Tomorrow I’ll see if can find another ATM. Even though Blanche gives me directions, I still can’t find the streets. None of the streets have street signs. If I drive by a street she goes into the recalculating mode and that is not so helpful. So, I will try again tomorrow and see what happens.
Posted by Beauty at 9:40 AM