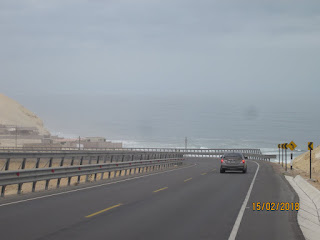 15 February 2018 – I woke up and knew I had not checked out my route for today. According to Blanche, it would be a 180 Mile/300 Kilometer ride, and all I have to do is follow the Pan American Hwy. I also needed to find a hotel for the night in Tacna, Peru. I spent a bit of time hunting on the internet and finally found a hotel I liked. It was Hotel Holiday Suites. Everything perfect: wi-fi, good price and secure parking. I got the GPS Coordinates figured out and written down. I was good to go after breakfast. I was loaded and off before 10:00 a.m. Actually, a rather late start. Blanche staggered around a bit but she eventually got me out of town. 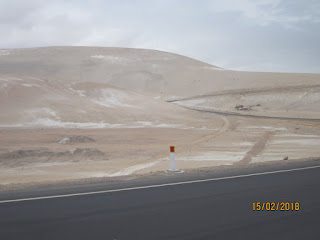 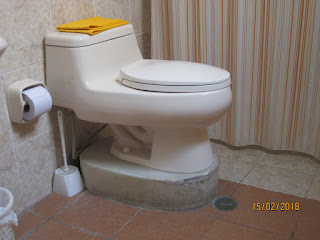 I was back on Pan American Hwy with the semi-truck traffic. That’s when I know I’m where I belong. We went through one roundabout and I could swear I picked the wrong exit. Blanche recalculated and we kept going. The road was good but I always had a feeling we were on the wrong road. Toward the end I was driving on roads that were too narrow and there were no semi-trucks. She tried to drag me down gravel field roads. I finally put my foot down and wouldn’t drive them. There were black top roads paralleling the gravel roads. She picked the gravel roads because it was a shorter faster route. She worked me over pretty good today. If I ever get that feeling I’m on the wrong road again, I have to trust that and go back and check the signs that I picked the right road. Eventually, she got me back to the Pan American Hwy. That was an adventure.

From there on into Tacna, Peru I drove through a lot of brown desert. I entered Tacna just at sun down and my trip odometer showing I had driven 250+ Miles / 402+ Kilometers. Slightly more than the 180 miles / 300 Kilometers she predicted before I left this morning. I entered in my GPS coordinates to take me to the Hotel Holiday Suites. Everything went well but when I arrived at my destination there was no hotel. I’m near the hotel, but there was no hotel to be seen. I’m pissed: I keep coming up short and not finding my hotels. Rounding off the numbers in the decimal seconds must be affecting me finding the hotels. I never did find Hotel Holiday Suites and ended up staying in Hostal Montana Suites. It’s ok, but it’s not my first choice in where I wanted to stay. I talked to Mary and bitched about Blanche being so annoying. I took the night off and went and got something to eat.
Posted by Beauty at 12:07 PM