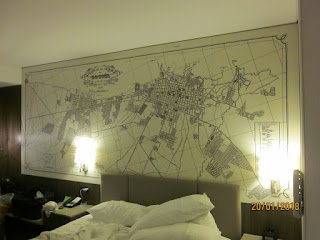 21 January 2018 – As usual, it time to get up and get mobilized. I went downstairs and ate an early breakfast to take the edge off of what could turn out to be a long day. I went back upstairs after breakfast and got my first load of stuff going to my motorcycle. I had my blue card with me and had the receptionist check it that read correctly before I checked in with the behind-the-glass Security Person. The blue credit card sized card allowed me to park for free while I stayed at the Marriott. I called it my Get My Motorcycle Out of Jail Free card. You cannot get anything out of that 3 level parking ramp unless you pay or you have a get out of jail free card. So the Security Person ran my card and it came up good. I now can get out.

I put my laptop and all my paperwork into my top box and saddle bags. I put Blanche back into her docking station and fired up my motorcycle. I gave her a few minutes to warm up and then drove up two ramps to get out of the 3 level sub-terrain parking garage. I stopped at the gates and inserted my blue card. The card reader spit my card out like she didn’t like it. I tried it four different ways and none of them worked. I tried the card in the 2nd lane and that card reader didn’t like any better. So I hike back to the Security Person behind the glass. He wasn’t in his office. I get in touch with another Security Person and he gets in touch with the Security Person behind the glass. He comes flying back to his office and reruns my blue Get Out of Jail Free card. Apparently it read incorrectly and he retyped in the correct code. I walked back to the -1 level parking garage and inserted the card. It worked perfectly and I was able to drive up the ramp and out of the building.

I had the receptionist inform the Security People that I would be parking my motorcycle near the reception area so I could load my bags. When I showed up, everybody was all smiles so I knew the receptionist informed them of my situation. Had they not been warned they’d be all over me like piranha fish. I was loading up and leaving and I didn’t need that. Even the guy from the restaurant couldn’t resist coming to look at my motorcycle. I got everything loaded up. Blanche was a little slow to wake up today, being so close to the buildings. She couldn’t find any satellites. I received a lot of well wishes as I left and by the time I turned on to street she was calculating the route.

To get out of town, I had to drive back to the airport to hook a U-Turn and then drive down the other side of the six-lane highway. She followed my programming to a T. She got me out of the metropolitan area of Bogota like a champ. Once I was in the suburbs thought, she got lost in a roundabout. All she wanted to do was go around and around the roundabout. It had me stumped for a while. She took me to the right road but then wanted to turn around and go back to the roundabout. Anyway, I manually went to the next way point and continued on my way.

I stopped on the way out of the city to get some gas. Something I’ve been noticing is that the Spanish is a little different down here. It’s kind of like the difference between American English and British or the Queen’s English. We understand it but it’s a little different. The Central American and South American people are aware of this difference also. Getting back to buying the gas: I want the guy to fill my gas tank. Of course, we can’t communicate so he does his best and puts in $10,000 Pesos worth of gas. I kept motioning for him to put in more gas. Well the pump shut off at $10,000 Pesos. I asked if I could put more gas in, and he motioned yes go ahead. So, I pumped in almost $50,000 Pesos / $17.00 USD into my tank and the guy could not believe I could put that much gas into my motorcycle. It’s a 10 gallon tank that I replaced the original, smaller gas tank with. I paid him and was off.

All along the route I was on, heading out of Bogota, there were hundreds of bicycle riders. Just hundreds of them. I remember that one other Sunday I left a big city early in the morning, and the route I was taking had hundreds of bicycles on it too. So, I’m guessing Sunday is the day when the bicyclists get out and ride. Although it looked like they had check points. It could have been some type of competition. Once I broke free of the bicyclists, I eventually ended up on a nice four lane highway. Another little slice of heaven. I was driving 50 Mph / 80 Kph, and may have eventually reached 60 Mph / 90 Kph. But like all good things that must come to an end, so did my four-lane highway.

I started into the mountains with some pretty nice roads with very little traffic. I only had 60 Miles / 100 Kilometers to go to get to my destination for the day. How bad could it get? Why did you have to ask? The truck traffic started out light and continued to build throughout the afternoon. Everybody’s in a hurry. Some trucks are slower than others. Chances to pass are few: 1 or 2 vehicles in 3 Miles / 5 Kilometers. Car and truck drivers are all gnashing and gnawing on their steering wheels just waiting for an opening to pass. I thought one semi-truck was going to pass a slower semi-truck but all he did was pull up along side me and then force me off on the shoulder. That really ticked me off. Basically, what he said, was move over or I’ll run you over. He had his moment but what he didn’t know was I will have mine.

The traffic up and down these two mountains was just tooth and nail. The oncoming car and truck traffic was just as bad. Bumper to bumper traffic. Eventually my traffic came to a dead stop, and I mean dead. Nothing was moving for probably 2 Miles / 3 Kilometers. I waited two or three minutes and I pulled out and drove down the oncoming car lane. Anytime a car or truck was coming at me, I would pull into an open spot in the stopped traffic. You remember the truck that forced me on to the shoulder of the road? Well I passed him up in about 15 vehicles. I should have flipped him the bird but I’m sure he had bigger problems to deal with. I continued driving in the oncoming traffic lane until I arrived at a stalled vehicle. Any vehicle driving 15 Mph / 25 Kph was leading a parade of cars 3 miles / 5 Kilometers long. Some people get so stressed they pull off in any opening just to get out of the rat race. If you get out of the rat race though, you lose your spot and then you start at the end of the line. I know the stress.

I made it over the two mountains and was finally driving into the city I wanted to stay the night in. Man, I was happy about that. The rat race was almost over, or so I thought. Guess what? Road construction on the bottom of the mountain. One lane traffic with a flagman. The road and dust was horrible. I know the traffic was backed up five miles. People were out of their cars talking and taking potty breaks all over the place. I started slowly passing people up like I did before. I just coasting down the mountain in the oncoming car lane. Other smaller motorcycles were driving 30 Mph / 48 Kph past me, diving in and out of the cars. My big heavy Kwakasaki doesn’t do that well. So, I take it nice and easy. I couldn’t get away from anybody with my motorcycle if they got mad at me. It’s too big and top heavy. As I’m going down the mountain cars and trucks are beginning to move and then stop. When they moved I’d get in line with the moving traffic. When it stopped I pulled out and just kept passing till I got into the moving traffic that didn’t stop. Once I got thru the congestion and road construction I started looking for a hotel. I was struggling with that. All the hotels seemed to be downtown with no secure parking. While I was downtown looking around, a young lad and his girlfriend were drooling over my motorcycle so I asked them if they knew a hotel I could stay in. They said they did and offered to show me where it was. They drove to one and showed me another, but they didn’t look like they had secure parking so I kept looking.

Finally I found a nice hotel and they have offsite secure parking about 100 yards / 100 meters away. I unloaded my bike and a Good Samaritan showed me the secure parking spot. The old guy unlocked the gate and I drove in. I found out later the building is under construction by the same people who own the hotel I will stay in. So, the old guy was acting a little weird about something. I didn’t know what he wanted. Enter Carlos: he asks if he can help. He speaks English…can you imagine that. Just out the blue somebody can speak English. To make a long story short I gave the old guy a tip. I then sat down with Carlos and his friends for about an hour or so and we talked about my travels and what they did. There was a lot of laughing and yucking it up. I’m not sure what it was all about. Somebody bought me a Coca-Cola and when I offered to pay they told me not to worry about it. So, I thank them for that. I told them my butt was sore from riding motorcycle all day and I needed to go to bed. Carlos told me that if I needed anything to let him know and he would try to help me out. I asked him if he knew where I can change my oil. He said he would help me with that. We agreed to meet at 8:30 in the morning pick up some oil and find a place where I could change it. I went back to the hotel and crashed. What a hell of day.
Posted by Beauty at 11:04 AM