13 May 2018 – I was thrilled to be invited to Mother’s Day dinner with Elis’ family. I was met at the gate to the home by Elias and cordially invited in. They were a very inviting family despite me not be able to speak a word of Portuguese. Also it was very nice to eat a home cooked meal. I can’t tell you how many times I struggled with my cell phone translator to get a hamburger / hamburguesa to eat. It had been months since I sat down and ate with a family. 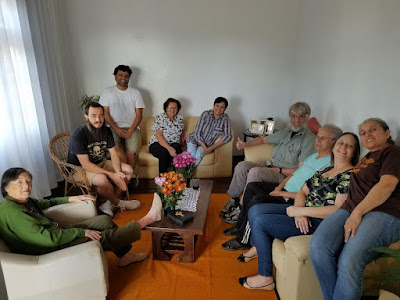 Everyone ate their fill and were sitting around the living room talking. I asked if I could take a picture. It was ok with everyone. From left to right: Great Grandma Zulmira 97 years old, James Jr. (filho), Sandro, Herminia (Linda), Kelly, DaveR, Elias, Cibele, Elis and James Sr. taking the picture.

Before we all left, we toured the new home next door. It was a beautiful new construction, all white. It was nice. I could live in it very easily. The first thing I noticed in the kitchen was it had four-plus electrical outlets. I couldn’t believe it. I believe it was Cibele whose forward thinking had those extra outlets installed. Usually most kitchens I was in had only one outlet. I never understood that. I often wondered why when newer homes were built they never installed more than one outlet. It was a beautiful house. 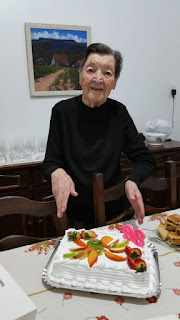 We eventually all left and on the way back to James Sr.’s house we stopped at a grocery store. Elis was shopping for something and James and I stopped at the sweets counter. He ordered two cakes. He knew I liked both the coconut and chocolate cakes and he wasn’t wrong. When we got home, I dove into the different cakes and ate my fill. I couldn’t resist, and then went to bed happy.
Posted by Beauty at 9:08 AM