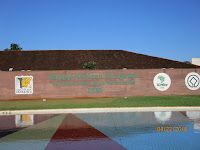 22 April 2018 – God how I hate getting up early. It’s time to get mobilized. I got my walking clothes on, water, camera and cell phone and headed to the lobby. I got my wrist band and was herded to the shuttle bus. It made a few more stops before we departed for the park. One thing I noticed was that none of the passengers commented on how rough the roads were and how fast the guy was driving on these roads. I know in the United States the passengers would have been making a ruckus about how they were being bounced around in their seats. These 50 and 60 year old women took it in stride not blinking an eye.

We were dropped off at the main gate of the Iguacu National Park / Parque Nacional do Iguacu and
loaded on to yellow Volvo buses. 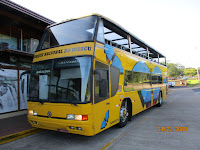 These buses transported us to a start location / trail head that you could walk to a point where you could see all the different falls. It was located near a pink tourist hotel in the Park/ Parque.  Some of the falls were small and others very large.  There were many different phot stops where you could take man different pictures of the falls.  It was nothing short of beautiful. 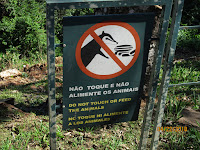 animals but that didn’t stop the people from feeding the critters.
Those ring-tailed critters were into
everything. If you had gum or crackers in your purse they were into your purse. They had a really good nose on them. When you look at the pictures you will see how mischievous they are. They actually are nothing short of pains in the ass. 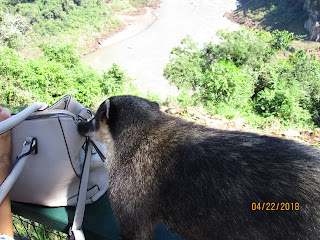 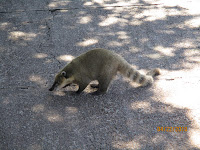 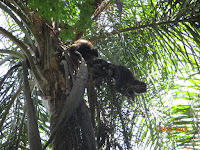 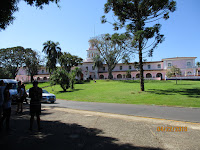 When you reached mid-point along the trail there was a small fast food eatery / restaurante. I decided to stop for a break and bought a bottle of water. Those ring tail critters infested the whole eatery / restaurante. Every morsel of food that touched the floor was theirs. It took one employee with a stick in one hand and a broom handle with a soda can on the end in the other to drive off the critters. They would drag the pop can on the concrete which would scare off the critters. You couldn’t keep ahead of them. The employees were actually fed up with them. They were into everything. While I sat and watched the show, the butterflies would keep landing on me. I had three or four of them at a time landing on me. I must have tasted better than most people. 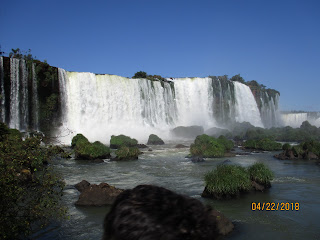 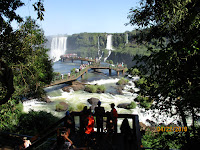 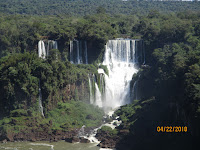 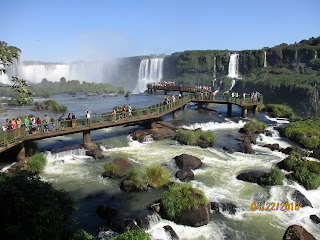 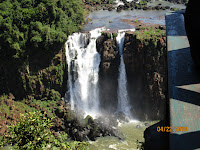 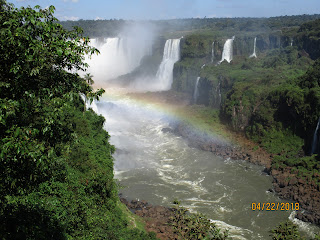 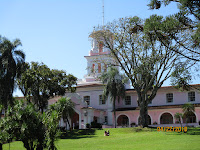 Eventually, the entertainment went away and I moved on to the big water falls. I believe it’s called The Devil’s Throat Gazebo / Mirante da Garganta do Diablo. I walked up to near the falls and then saw there was a walkway where you could get into the mist created by the falls. I hiked down there with the masses of the other people and had my picture taken there. I was glad I took the pictures but didn't care for the mist on my camera and cell phone lens. Along with my tour package came a lunch. I struggled to find the restaurant, but eventually did. It was a buffet with all kinds of food for one hungry gringo. I ate my fill and then shopped all the tourist shops. I bought an Ink pen for Mary and a postcard of the water falls for Frank. I went from there back to the gathering spot for the bus. I suppose we waited an hour for the shuttle bus by the park’s main gate and eventually were returned to the hotel. 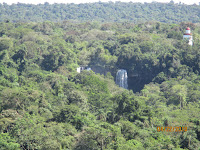 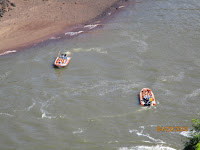 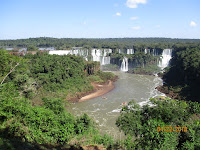 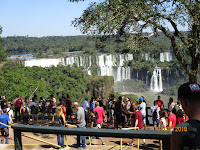 Once back, there was one more arrangement I needed to make. I wanted to tour ITAIPU Binacional Hydro-Electric Plant. I can ride my motorcycle out there or take a taxi. So, I set up a taxi. It would arrive at 3:00 p.m. and I must wear closed toed shoes. No tennis shoes. The tour would start at 4:00 p.m. I would be taking the English-speaking tour. I decided I would walk down to the small convenience store and by some apples, water and bread. The older guy in there realized I was American and tried to encourage me to buy more of everything. He was always disappointed when I purchased only a few items. I then hiked it over to the ice cream cone store and bought myself one. I ate it at the store in their outside sit down area and watched as the people walked by. The street was lined with trees which were in bloom and the whole picture / scene was quite beautiful. When I finished, I went back to the hotel and called it a day.