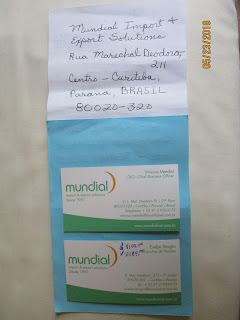 21 May 2018 – I will walk to the Mundial Import and Export Solutions building today and find their office in the building. This building has many floors and if I can’t find the floor directory of the building, I may have a problem. If all fails, I have their business card and I can ask around till I find their office. I gathered up all my motorcycle documents and started off to Mundial Import and Export Solutions building. I took my directions along from yesterday just in case I might forget the street names. I pretty much remembered the route but once I got to the large intersection, I had to watch how people were getting through it. You just had to be careful. The local people didn’t have a problem, just me. Anyway, a little more practice and I’ll be just as good as the locals.

I arrived at the building and walked in. I scanned around the small entryway. I didn’t see a floor directory right off. Someone nudged me and said something. I didn’t understand him and showed him the business card. He motioned that it was up on the second floor. I could take the elevator or the steps. I took the steps, always looking for any sign of the office. Then I came to the door with a large “2” on it. I open it and looked in. There it was, two glass doors with green writing that spelled out, “Mundial Import and Export Solutions.”

Before entering the office, I saw the first hurdle I had to jump. The front door receptionist. I had to communicate to her that I wanted to see Vinicuis Mendes about flying / shipping a motorcycle to Los Angeles, California, U.S.A. I also told her I didn’t speak any Portuguese. I’m sure I used my cell phone translator for this. She in turn told me to have a chair and wait. She called someone and I sat and waited for about 15 minutes. Eventually Vinicius and Yazmin came into the lobby. They introduced themselves to me, and I to them. They were very cordial and invited me into a conference room. Yazmin spoke very good English and Vinicius not as well. When I spoke, I spoke very slowly for them, with no slang. It's not easy to not use American slang in normal conversation.

They asked for all the information on my motorcycle and I provided it. They needed the name of my representative in Brazil, the original title…..no copies, my border crossing paper work and the address in Los Angeles, California and my representative in Los Angeles, California. I provided all of it and they made copies of all of it. When we finished with all of that, they started putting together an Air Way Bill and pricing. Everyone was happy. Yazmin told me I had to sign, let's say, a release form that had to be Notarized and registered with the City of Curitiba, Brazil. I think it gave permission for Mundial Import and Export Solutions to ship my motorcycle and handle all the paperwork. It was a formality because I had to sign it in front of witnesses.

We left the office and went across the street to a government office to handle this formality. We almost get to the window and Yazmin realized she had forgotten her Identification. She had to make a hasty trip back to her office to get her identification before we could move forward. We had been standing in line for about 30 minutes before she realized it. She felt bad about that but I wasn’t too worried about it. I had been standing in lines for hours, maybe weeks, since the start of my trip. We got all the paperwork taken care of and all was well. It was almost 12:00 p.m. when we walked back to her building and parted ways.

I returned to the hotel and left a note with the receptionist that I was expecting James Meurer Sr. at about 2:00 p.m. I asked them to call my room when he arrived. At 2:00 p.m., the receptionist called me and let me know James Sr. had arrived. I went down to the lobby and met with him. I told him I needed to go back to my room and get all my motorcycle paperwork and then we’d leave for Mundial Import and Export Solutions. I asked James Sr. to represent me in case I needed someone to speak or translate Portuguese for me when no one spoke English.

We met with Vinicius Mendes and Evelyn Stinglin again. The final price was established for shipping the motorcycle and all the paperwork was completed and signed. All money transactions were going to be handled by electronic bank transfer in Brasilian Reals currency. The wheels were set in motion and everything was looking good. Tomorrow I was scheduled to deliver my motorcycle to the Aeroporto Internacional – Terminal de Cargas – Importacao / Exportacao. Things were looking up.

We walked from the Mundial Import and Export Building to James Sr.’s Apartment Building.

He introduced me to the Security Guard who controlled the wrought iron car gate. He also showed me where to park tomorrow on spot #6 or #8. I can’t remember because the number has been rubbed / worn off. He then gave me a tour of his apartment and told me everything I needed to know about it. He also stated that the apartment didn’t have wi-fi. We left the apartment building and walked over to the near by shopping mall. It was called the Mueller Shopping Center. We took a walkabout and James Sr.’s showed me where I could by airplane tickets, exchange money, the food court and where to sit to get free wi-fi.

As we were leaving the shopping mall James Sr. recommended a good restaurant. So, we walked over to see what’s being served. They were serving pizza. James Sr. said, I know a better restaurant out near the Walmart Store. It was a Brasilian Steak House. We ate our fill and I mean over fill. On the way back to the apartment / hotel we stopped in the Walmart store. One of James Sr.’s favorite. I purchased some luggage tags for my bags when I fly back to the U.S.A. We then returned back to the truck parking lot and I walked back to the hotel. Oh boy, what a day.