29 May 2018 – I woke up to the clatter of my cell phone. I wasn’t going to look at it thinking it was just updating the weather. Then I thought maybe I better, as it might be something important about the shipping of my motorcycle. Sure enough, it was Vinicius Mendes informing me that the RF Prosecutor / Customs Inspector might inspect my motorcycle today at 10:00 a.m. He said there is a high probability the Inspector may not show up for the inspection claiming the lack of fuel. He said we will try anyway and could I please come to the Mundial office at 9:00 a.m. I replied back and said I will be at Mundial office at 9:00 a.m. He replied back saying thank you and that we will be waiting for you.


I jumped out of bed feeling excited about the possibility we will finish all the paperwork associated with the shipping of my motorcycle. I took a quick shower and choked down breakfast and was out the door walking toward Mundial Import and Export Solutions Office. Much to my surprise I arrived at the office 15 minutes early. I walked back to the City Mall Area and sat for 10 minutes looking at all the people walking by. I noticed groups of retired men seated around and talking. Not too different from the United States. It was a quick trip, and I was back in the Mundial Import and Export Solutions Office a few minutes early. 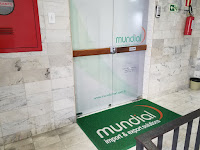 I talked to the receptionist and she informed Vinicius Mendes that I had arrived. Yazmin the English-speaking woman arrives again and tells me that we are waiting for Evelyn. She said Evelyn will drive to the Mundial Import & Export Solution Office in the Aeroporto - Terminal de Cargas. When we arrive, we all have to check in at the Security Gate. Evelyn and I know the process of how you have to enter the Terminal de Cargas. You have to show a driver’s license or passport. Evelyn and I were already registered with the Security Gate. I was registered the day I delivered my motorcycle. Yazmin had to go through the process and we waited. 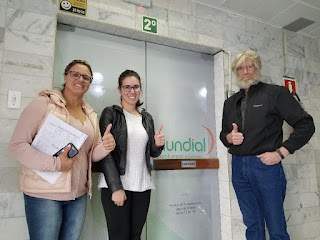 Once we all successfully passed through the Security Gate, we walked toward the Mundial Terminal de Cargas Office. Along the way Evelyn pointed out the different buildings to Yazmin. The ones that handled the Import of goods, the ones that handled the Export of goods and the Customs Office. She also showed Yazmin the route to Emerson Farias’s office. He will guide Evelyn, Yazmin and myself through Customs Inspection Process. When we arrived at Emerson Farias’s Office, we went through all the formal introductions and Yazmin had a chance to meet co-workers she has been working with for some time and has never met. Everything was quite new to her.

So off we go to the Terminal de Cargas – Exportacao. Before we could enter Terminal de Cargas Exportacao we were issue a Personal Security Badge that is signed out to you personally. We must turn them in when we leave. We then have to pass through another security checkpoint wearing the Security Badge. We couldn’t take cell phones, cameras, weapons, keys etc. etc. Once through the Security Arch, we were checked with a metal detector wand. Then I find out you can take your cell phone with, so I go back and get my cell phone, flashlight and camera. Apparently, their concern is about taking pictures of other customer's exports. Well anyway, we walk through this very large building / warehouse. It must have been the size of a football field. Yazmin was very impressed by its size. It actually was two buildings connected to each other. It was a hike till we reached the shipping container / box that held my motorcycle. Evelyn and Yazmin couldn’t believe the size of the box. It was large. Emerson requested the top be removed for the Customs Inspector. 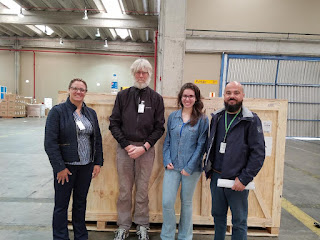 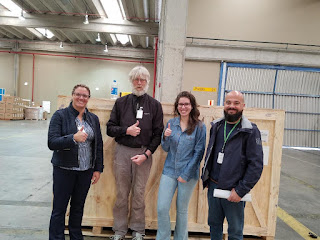 We waited around for about 20 minutes for the inspector. When he arrived, he immediately requested the paperwork. He then asks to see the engine number. Well, with the sides on the box no way could he see any numbers. The warehouse workers had to take off the side with the VIN and Engine Number. The guys unscrew the whole side and took it off. Evelyn and Yazmin were doubly surprised to see just how large my motorcycle was. The only motorcycles they see are the 125cc / 400cc motorcycles ridden around town. I showed Emerson the VIN number that the inspector was looking for and where to find it. I told him to show the inspector the VIN number. He did and I held my flashlight so the inspector could see the number. The inspector could only see the first 4 letters and the last 5 numbers of the VIN number. The rest of the numbers and letters were covered by the electrical wiring, throttle cables and brake lines. I thought for sure he would ask me to remove the clamps that held the cables in place. But he didn’t, whew!!!! He then asked to see in my top box and right saddle bag. He looked in but really could see anything without unloading the box. The same was true with my right saddle bag. He couldn’t see in the left saddle bag because the lid couldn’t be opened because the shipping container wouldn’t allow it. He signed off on the shipment of my motorcycle. I wanted to do the happy dance, but didn’t. The warehouse guys re-attached the side and top. The Inspector slapped on a seal when the top was screwed on. I should have taken a picture of that but I didn’t. I asked the warehouse guys if they could take a picture for me of Emerson, Yazmin, Myself and Evelyn. They did so graciously. I then wrote my name on the box and we all walked back to Security check point and turned in our badges. They also did another metal detector wand scan of all of us. We passed and I collected up all my stuff out of the locked locker.
We then walked back to Emerson Farias’s office. He did some paperwork on the shipment. It probably had something to do with the Air Waybill. I asked for a copy of it and a website where I could track the shipment of my motorcycle. I also told them about my motorcycle trip around the world in 2009. They were quite surprised by that and that I was still riding the same motorcycle. It’s a similar reaction by people here who aren’t aware of adventure travel with motorcycles. Most people think of a motorcycle as a working vehicle. To make deliveries of propane gas, food, water and mode of transportation back and forth to work etc. For some it’s the family car / pickup. It’s not seen as a recreational vehicle only ridden on the weekend. If you look closely at motorcycles here you definitely can see they are only used as a utility / work vehicle rain or shine.

With everything wrapped up at Mundial Import & Export Solutions Office Evelyn, Yazmin and myself left Aeroporto - Terminal de Cargas and drove back to downtown office Rua Ma. Deodoro, 211. On the way there we stopped to eat at Lonato Barbecue. We all talked about ourselves and enjoyed a very nice dinner. We also ate way too much food. Evelyn then drove back to the office. I just want to say Evelyn is a way better driver than I am in Brazilian traffic. She handled her vehicle expertly. If I remember correctly, she said her father had her driving from a very young age. Maybe even younger than 10 years old. She backed into tight a space with ease using her mirrors. It would have taken me 3 tries to get parked. Evelyn got it right on the first try. We parted ways when we reached the office. Yazmin said she would send me an Avianca Brokers telephone number for Los Angeles, California in case I needed a broker to release my motorcycle from Avianca Air Cargo Terminal. We shook hands and I walked back to Hotel Ibis Styles.

I was basking in the glory that I had finally finished with all the issues pertaining to the shipping of my motorcycle. James Meurer Sr. and Elis contacted me about 8:00 p.m. They said they had just arrived at their apartment one hour ago and were thinking about going out to eat. They were wondering if I was interested in going out to eat at the Lonato Barbecue Restaurant for an extended dinner. I had already eaten my fill there earlier in the day so I wasn’t interested in going there again to eat more food. I was stuffed. I told them I can eat a small dinner but not a large dinner. They recommended eating at the Mueller Shopping Center. We met at the Mateus Leme Street entrance and then walked around in the shopping center. After the scenic tour we went to the food court and ordered something to eat. I ordered a hamburger and water. James Sr. ordered a hamburger with fries and I think Elis ate some kind of fish. We talked for an hour about our travels and some about the trucker strike over the price of diesel fuel. James Sr. said they were returning back to Telemaco Borba because the acts of a few truckers were making it very dangerous to drive on the roads. We parted ways saying we would meet in Sturgis, South Dakota in August 2018. I came back to the hotel and went to bed well fed and happy.
Posted by Beauty at 1:09 PM