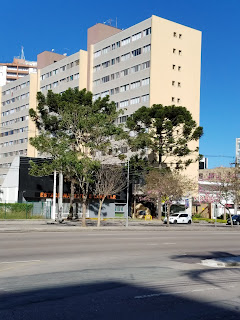 23 May 2018 – I got up this morning still thinking the worse about my shipping problems. Out of the blue my room telephone rang. The receptionist told me James Sr. was waiting in the reception area for me. I told the reception lady I would be down in 10 minutes. When I arrived at reception James Sr. had left. I went back to my room on the 3rd floor. I collected all my paperwork, camera, cell phone and red AeroStitch Jacket etc. etc. and walked over to James Sr.’s apartment. 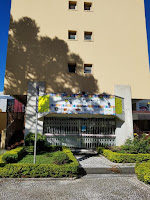 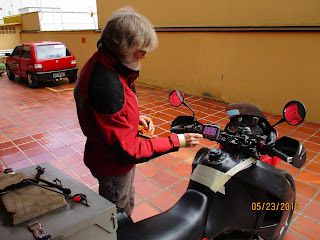 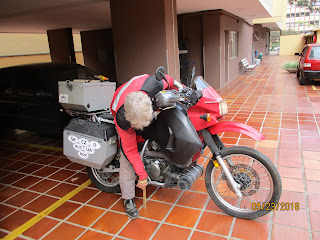 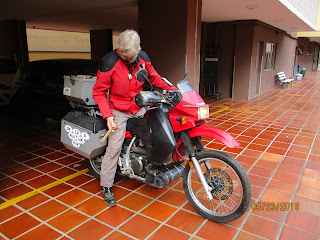 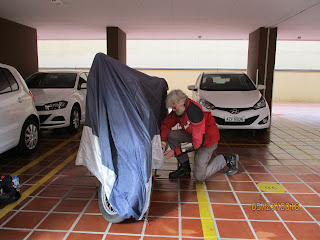 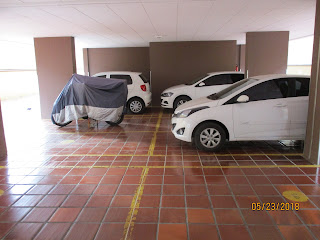 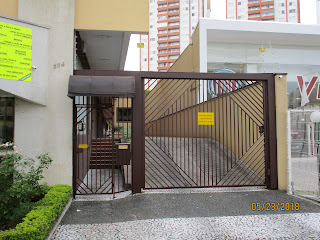 When I arrived at the apartment building, I took some pictures around the building and said good morning to the Security Guard. I walked back to where my motorcycle was parked on spot #6 or #8 to see if my motorcycle was ok. It looked fine. Actually, I wasn’t worried about it. The apartment building has real good security. I took some pictures in the parking area and around the back of the building. It’s a real nice parking area with incredibly small parking spots. When those spots are filled, I don’t believe there is 1 Foot / 30 Centimeters between vehicles. You ought to see the people squeezing in and out of their vehicles. It’s not something for the elderly or obese person. While I was taking pictures, I met the building manager and the cleaning lady that had worked there for 25 years. All nice people as long as you follow the rules.

I then knocked on the apartment door and James Sr. answered it. He said that Vinicius from Mundial Import and Export Solutions called / text messaged him that we should deliver the motorcycle to Aeroporto Internacional de Curitiba – Terminal de Cargas – Importacao / Exportacao. I collected up my helmet, gloves and anything else I left in the apartment overnight. We went down to the motorcycle and I removed the cover. While I was doing that, I had James Sr. take some pictures of me for my blog. He’s a bit of a photographer so I told him to take as many pictures as he wanted. Hopefully, that way you get one or two really good pictures. I got the cover bagged up and put in the saddle bag. I then started my bike, rolled it outside and put the GPS back into its dock. While the bike was warming up, I put in the GPS Coordinates of Aeroporto Internacional de Curitiba – Terminal de Cargas – Importacao / Exportacao. It was a bright sunny day so Blanche didn’t have a problem finding satellites.

James Sr. and I agreed to meet at Ipirangati Gas Station on the corner of Rua Mateus Leme and Rue Sen. Xavier da Silva. He needed diesel fuel for his pickup and I needed to get a small bite to eat. When I left the apartment, I had not eaten breakfast and I was a little hungry. I ate something from the gas station and purchased a bottle of water and a Pepsi. When James Sr. was ready, we departed from the gas station and drove to the airport. On the way we were stopped at a stop light and this car pulls up next to me, unrolled his driver’s side window and started speaking excellent English to me. I was quite surprised. A welcome surprise was more like it. Something a little different than the ongoing struggle with the shipping of this motorcycle. Before that another car pulled up alongside of me and was filming me with his cell phone. When he was finished, he took off and was gone.

We were just nearing Terminal de Cargas – Importacao / Exportacao when we had to cross this four-lane street / highway. I was waiting at the stop sign before crossing the highway and was almost rear ended by a van. I didn’t know the car that was coming had to slow down for a speed bump which would have left ample time for me to cross the highway. The white van knew about the speed bump but I didn’t and that’s why he almost rear ended me. Well, I lived thru that and then we came to an intersection where we had to turn left or right. A large fuel truck was stalled right in the middle of this intersection. James Sr. didn’t know which way to turn left or right. He asked one of the guys with the truck and they didn’t know for sure where the Terminal de Cargas was located. I told him my GPS says turn right. So, we turned right and the road took us right to the Terminal de Cargas – Importacao / Exportacao.

We walked in, identified ourselves and asked for Emerson. Emerson had not arrived yet and the paperwork for my motorcycle had not yet been printed out. The ladies in the office were not yet aware they were shipping a motorcycle to the U.S.A., so that was something new for them. They attempted to contact Emerson but I don’t think they had any luck. We waited for Emerson to arrive and in the interim we also talked with the women in the office. James Sr. told them about my travels through Mexico, Central and South America. They were genuinely impressed.

Finally Emerson walked in and the women brought him up to speed and introduced us. James explained that I brought my motorcycle over to Terminal de Cargas to be crated up for shipment to Los Angles, California, U.S.A. Emerson did not yet have the paperwork to start the shipping process. He went on his computer, found the documents and then printed them out. He had to hike out of the office to claim the documents because his printer was not working.

We were finished in the office and hiked back out to the Security Gate. We had to have permission to push my motorcycle past Security on to the Terminal de Cargas grounds. Emerson handled all the security issues. When Security said, it was ok I started pushing my bike. You couldn’t ride the motorcycle you had to push it. I think I pushed it about a 30 Yards / 30 Meters to Terminal de Cargas loading and unloading ramps. I parked along side of this large ramp and drained the gasoline out of the gas tank. We / I had some difficulty getting the siphon hose to flow. Once we got it flowing, I drained off three plus Gallons / 11 Liters of gasoline. While I was draining off the gasoline, I asked James Sr. if he would empty the two water bottles in my right saddle bag. He did this. I also unhooked both battery cables and removed the mirrors. I put the mirrors on my riding pants on the water bottles in the top box. The motorcycle documents I kept with me. I gave both James Sr. and Emerson each a bite size Snickers candy bar out of my top box.

I was wrapping up all the gas draining, battery stuff and putting all my tools back into the saddle bag when I found a washer from the positive battery cable laying on the ground. I picked it up and said I’m leaving spare parts laying around. I was pissed and then attached it to the left saddle bag top wire rack. I used a wire tie from the wire rack. Hopefully the washer will still be there when I un-crate the motorcycle in Los Angeles, California. While this was happening, someone paid us a visit and said, hurry it up, the warehouse workers were getting ready to leave for dinner or locking up for the day. I don’t know which one for sure but stressed hurry up we want to get going. James was taking care of the drained off gasoline, unused containers, and siphoning hose. We then pushed my motorcycle up the ramp to a large flat loading dock.

I parked the motorcycle all the way into the unloading area out of the way of the trucks and put the stick under the right center foot peg. It’s the stainless steel pivoting foot peg. I told Emerson that the stick had to be under the foot peg or the motorcycle will fall over on the right side. God, I hope that doesn’t happen. I then ran back to my red AeroStitch jacket and got my black Sandford Sharpie 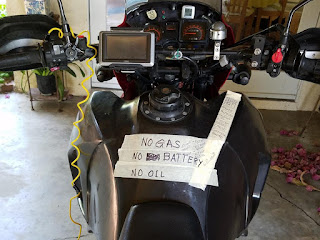 marker out of the plastic sleeve on the left sleeve of my jacket near my wrist. I ran back to my motorcycle and wrote on the masking tape near the front of the seat. I wrote no oil, no gasoline and no battery on the tape. I checked that the top box and both saddle bags were locked. I didn’t lock the front fork, so it could be rolled around. I didn’t lock the gas tank either so the inspector could see there was no gasoline in the tank. I left my kickstand block and cables laying up by the speedometer and tachometer. Hopefully it doesn’t grow legs and walk off.

At this point, a pallet had to be built for shipping the motorcycle and it had to be inspected by a Customs / Aduana person. 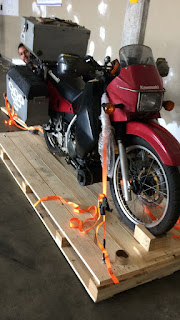 I was told I could be required to be there during the Inspection Process. Hopefully, Vinicius or a representative from his office will be there with me during the inspection process. James Sr. and Emerson collected up the gas containers and siphoning hose. I gathered up my red AeroStitch jacket, helmet, bottle of water and documents bag. We took everything back to James Sr.’s pickup. I put all my stuff in the cab and James Sr. secured the gas containers in the box of the pickup. I took a couple of pictures of Emerson and James Sr. Then a picture of James Sr. and me and another of Emerson and myself. We said our goodbyes to Emerson and departed. I was glad we got the motorcycle deposited at Terminal de Cargas. One less thing to worry about.

On the way back to the hotel James Sr. and I stopped in at the Brasilian Steak House and ate an extended dinner. We ate and ate. Oh my God, too much food. James Sr. talked to the parking lot security people. It was a father and son wearing white t-shirts. I think they know and remember him because of his large Dodge Ram Diesel Pickup. It’s either a 3/4 or a 1 ton truck. It’s a big truck for South America. A Ford Ranger pickup is pretty typical pickup size in Mexico and Central and South America. 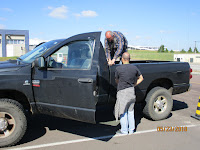 We got out of the truck and made some small talk. He asked if he could type in Vinicius Mendes’s 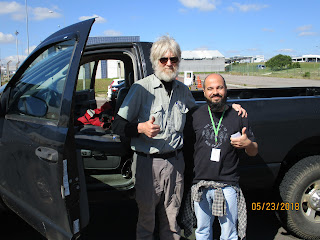 telephone number into my cell phone. That way I could receive texts from him i.e. Mundial Import and Export Solutions. I said sure, go ahead. We took a selfie with my cell phone in front of his pickup. I asked him to get in the Dodge Ram on the front of his grill. We then shook hands and parted ways. He went back to his apartment and then tomorrow back to Telemaco Borba. I will be staying until my motorcycle is on a plane out of Brazil, however long that takes. 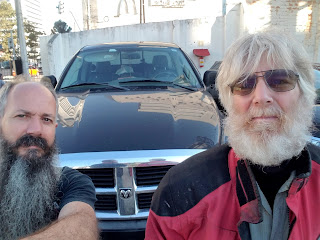 I was thinking it was the last time I was going to see James Sr. He has really helped me out a lot and I’m eternally grateful for that. He gave me many helpful tips as I traveled through Mexico and Central and South America. He was kind of a Guardian Angel watching over me. Maybe sometimes a little too much. He never asked a for a dime for all his help. I don’t know what he may have been doing behind the scenes to help me out either. I just hope I was a good guest. Well it’s time to hoof it back to Hotel Ibis Styles for good nights rest.