14 March 2018 –  To get to Ushuaia I will cross into Chile, then back into Argentina, and plan to stay in Rio Grande tonight. I rose pretty early and had all my bags organized the night before. I returned to my room to start loading my bike. I heard one of the BMWs start up and he was leaving. I gathered up my first load to go down to the bike. I put SPOT out, put my computer and paperwork in the top box, my shaving kit in one of the saddle bags and my GPS in its mount on the handle bars. SPOT sends me the same e-mail that it sends to Mary. I came back in and sat down for breakfast. 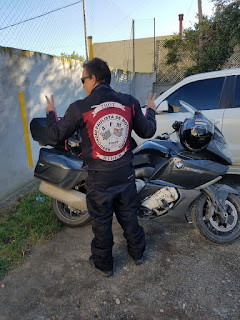 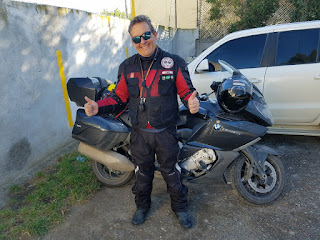 The fifth BMW was still setting there with its rider. I bungeed on my tires and walked over and said hi. Carlos was from San Paulo, Brasilia. He just returned from Ushuaia and so I pumped him for information about crossing from Argentina to Chile and back to Argentina. He told me all good roads except 20 Miles / 32 Kilometers of gravel. He said the gravel wasn’t bad…..just take it easy. Otherwise black top all the way. He was driving one of those new BMW 6 Cylinder Motorcycles. They are expensive in the United States so they must be really expensive in Brasilia. I never asked that question though. I asked him what he did for a living and he said he works for Honeywell as a project manager. He also spoke excellent English and we had a great conversation. We took a few pictures of us with our motorcycles and then left. He rides motorcycle with some club and I took a picture of the patch on the back of his vest. Carlos invited me to his home in San Paulo but pretty much knew it wouldn’t happen with my route and plans.

I finished bungee-cording my stuff on my motorcycle and pulled out. I needed gas and found a gas station but it wasn’t pumping gas for some reason. I was redirect to another gas station.I filled up there and the wind was picking up. I wanted to get something to eat but was afraid to let my bike sit by itself in the wind. I rode off a little hungry. If I got real hungry I could always eat one of my Snickers bars and an apple.


The wind was strong as I left town and never really let up much. If you got a reprieve from the wind it was in the mountainous area. The mountains broke up the wind. I can tell you straight up the wind was the worst in that flat desert that had nothing to slow it down or break up. That’s when you were pummeled the worst.


I arrived at the Argentine Border at Paso Integracion Austral 164 and there sat a newer Kawasaki KLR650 with smaller saddle bags / panniers and top box. It’s the first one I saw on the road. They seem to be pretty few and far between. I know they’re out there but you just don’t see them. I put my three supports under my Kawasaki to keep the wind from tipping it over. Anyway, I walked in and worked my way through Migrations / Aduana successfully. A young Aduana lad wanted to see if I had any fruit or the like in my top box. I took the tires off and unlocked the boxes to let him look in. He came up empty and looked a little disappointed because he didn’t find any contraband. Now if he had looked in one of my bags he would have found apples and I would have probably been fined.


I pushed my bike out of the way so other traffic could get through as I put my bike back together. As I was doing that it started raining with BB size hail or sleet. That was depressing. It only lasted 3 minutes and it was done. I looked down the road and it was all blue sky. I took a chance and did not put on my rain suit. So off I go to the Chile Border. When I arrived I had a heck of time getting my bike standing so it wouldn’t blow over. Eventually, I was able to get it stabilized with my three points of contact. I walked off hoping I didn’t find it laying on its side when I came out from Migrations / Aduana. 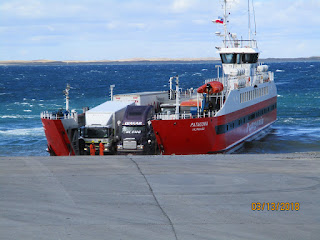 This border went pretty smooth and I was off to the ferry. True to form, Blanche tried to drag me off on a gravel road. I wasn’t hearing any of it and bullied her back on the black top. This short distance to the ferry was pretty much wind free. However, when I arrived at the ferry the wind was just a howling. It was blowing between the building and the car which speeded it up and it was cold. I couldn’t leave my bike standing alone. She would have blown over. So, I mostly sat or stood up with her between my legs. I was also parked alongside of the Kawasaki again. He didn’t speak any English and I didn’t speak Spanish so not much was said. Although he was an Argentinian. 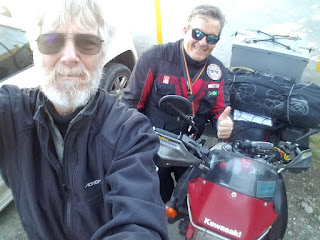 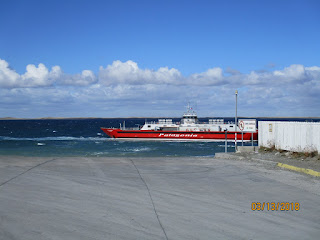 When I arrived, a ferry was unloading and I thought man I got here just in time. Well, the ferry unloaded, backed out and was gone. Well, that sucks. A second ferry pulled in, unloaded, backed out and was gone. There we sat wondering what’s going on. We figured the crew must be eating or refueling. In an hour they returned. We loaded and let me tell you that ferry was bouncing up and down in the waves and wind. I didn’t drive down the ramp till everybody cleared it. I didn’t want to get stuck on it and bounced into the lake. I think that lake or bay is part of the Atlantic Ocean. The waves were 5 Feet / 1-1/2 Meters high with white caps. The wind was blowing it sideways so they used bow and stern throughsters to keep it lined up with the ramp. To keep the ferry lined up on the off ramp the captain had to adjust the bow and stern throughster by how hard the wind was blowing. It was a constant juggle and mother nature won most of the time. 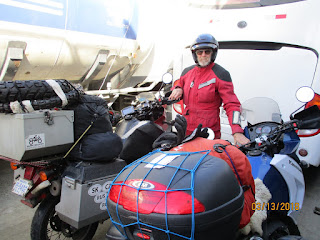 
In this route we had to drive about 20 Miles / 32 Kilometers of gravel. It wasn’t too bad. There wasn’t excessive wash board or anything like that. The other Kawasaki rode a lot faster on gravel than I did but he always waited down the road to see if I was coming along ok. That was nice of him.


By the time I arrived at the border he had already cleared it and was gone. I went in and went through Migrations and Aduana fairly smoothly. There were no problems with the wind at this border. Once I got through the border it was black top all the way to Rio Grande. It was also after 6:00 p.m. and the drive from the border is about 62 Miles / 100 Kilometers. It starts getting dark about 7:30 p.m. and so I was on the gas. I never drove slower that 62 Mph / 100 Kph. I don’t like driving in these towns in the dark if at all possible. I arrived at the Hostel I was hoping to stay at just as it got dark. I walked inside and asked if they had a room. They were booked up. Now I’m in a bucket of doo doo. The receptionist checked around and found an apartment I could rent. The problem was how can I find it? I can’t. She then found a hotel that had a room and I checked in Blanche to see if it was in her maps. It was. So, I had Blanche program a route to the hotel and it turns out the hotel was about 3/8 Mile / .40 Kilometer from the Hostel. I went back inside to gather up my helmet and gloves and made sure I left nothing behind.


It was a poky drive to the hotel because I can’t look and drive at the same time. I found the hotel and to my amazement the receptionist spoke English. She told me she worked in the United States. She offered to carry my bags to my room and order me a 6” diameter hamburger. It was all I could eat. I saved the french fries for later. I parked my motorcycle in front of the hotel propped up with my two sticks to keep it from tipping over and covered it. The receptionist told me the night security guard would keep an eye on for me. I went upstairs to my room and ate my hamburger. Another tough day and I went to bed.