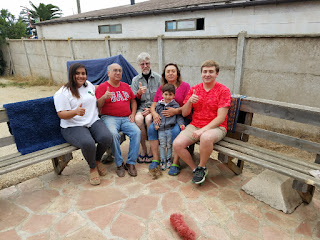 25 February 2018 – I didn’t leave till after 10:30 a.m. in the morning. Everything moved pretty slow…..it was Sunday. Valeria’s boyfriend Rene left around 10:30 a.m. and I left just before noon. After we ate breakfast Alfredo and I talked some about the most scenic passes to take to get into Argentina. There are two different passes I could take. The one has a smoking volcano. I would like to see that but I would be driving gravel and I’m not really interested in that. I have street tires on my bike and would prefer to stay out of the gravel. The other is a black top road to the pass which is nice but not as scenic. I’ll have to decide what to do when the time comes to change countries. 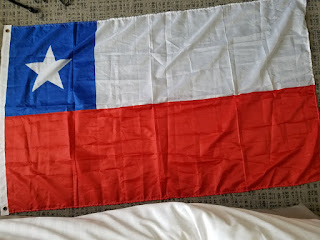 We all took a picture and I finished loading up my motorcycle for my ride into Santiago, Chile. Alfredo’s wife gave me a Chilean flag that she signed from the Family of Alfredo with affection, and dated it. I will treasure it. I eventually got my motorcycle loaded and was on the road by 12:00 p.m. I decided before I left that I wasn’t going to freeze like I did the day before. So I put on my sweater to be a little more comfortable.


Once I got back on Hwy 5 into Santiago the driving pace picked up considerably. I still drove 62 Mph / 100 Kph but for the most part most of the cars were driving 68 / 75 Mph / 110 / 120 Kph. I attribute it to better roads which allowed for faster speeds. I was about halfway to Santiago and stopped for gas. It was almost 90 Degrees Fahrenheit / 32 Degrees Celsius.  Man, I had to shed that sweater. I bought a bottle of water to hydrate some before I continued on to Santiago. Once I get into that city driving it’s going to get hotter. I didn’t know if I was going to be driving stop and go traffic. 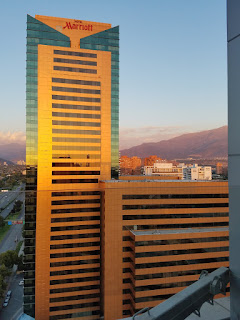 As it turned out, I never had to drive any stop and go traffic. That was nice. I thought I set a new record for missing my turn for finding the hotel, but I didn’t. I may have missed 4 or 5 turns but I eventually found the Marriott hotel successfully. When I pulled in I knew I was going to be hollered at for parking in the incorrect space or spot. Security was all over me. They finally called down one of the girls from reception who could speak English and she explained to me that parking for the Courtyard by Marriott was on the 5th floor of the building and reception was on the 7th floor. Just getting to the 5th floor parking was quite a feat. 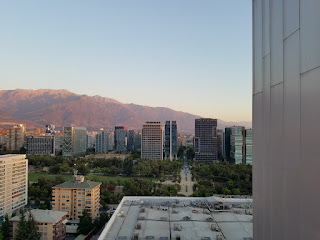 I had an individual waiting with a truck or cart to help move my bags to 7th floor Reception. We had a nice talk while I unloaded my motorcycle. Every time I stay at the Courtyard by Marriott I get viewed very suspiciously. The ever-friendly Security is always nearby when I walk in. So, I always have to be on my best behavior. To make a long story short I got checked in and moved into my room successfully. I was in my room by 5:00 p.m. I decided I was going to visit the Kawasaki, Yamaha and Harley-Davidson Dealers on Monday. Two for a visit and a t-shirt, and Yamaha for oil and a t-shirt. I looked up all their addresses and then got their GPS coordinates for Blanche. I put them into Blanche and had all three dealerships spot on. I then went to bed.
Posted by Beauty at 2:36 PM