5 March 2018 – Leaving Pucon, Chile and hoping to reach San Carlos de Bariloche. All depends on the how long it takes me at the border. I filled up at the Shell gas station right next to where Russ and I purchased the Argentine Seguro / Insurance. The lady who sold us that insurance was talking to someone on the ground from her balcony. She didn’t recognize me because I had my motorcycle with my red riding suit and helmet on. Once I got Blanche tuned up I departed for the border. It was about 50 Miles / 80 Kilometers to the Chile / Argentine Border. 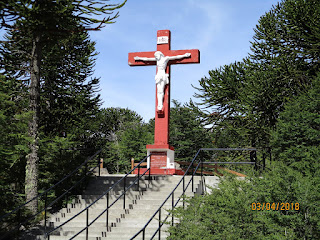 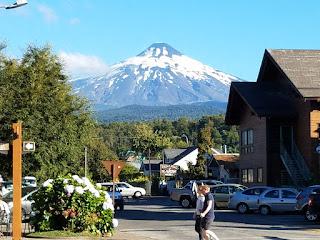 For the most part most of the driving was very similar to driving through the Black Hills of South Dakota. The nearer I got to the Paso Mamuil Malal 3960 Feet / 1207 Meters the more visible Volcano Lanin became. It’s a snow capped mountain that’s 12,231 Feet / 3728 Meters tall and has not been active allegedly in the last 10,000 years. I will leave the rest of that statement up to scientists to sort out. I took several pictures of the mountain as I neared the border, the last when I arrived at the border and some border pictures. 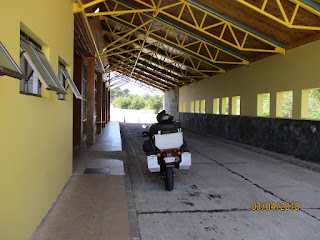 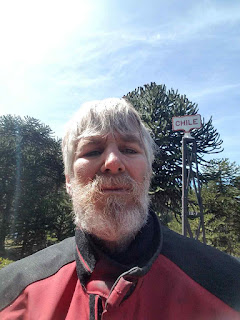 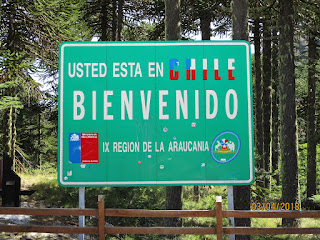 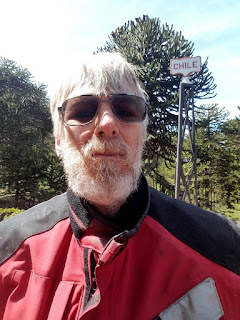 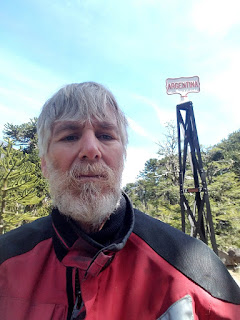 My experience at the Chilean Border went something like this. It took longer to get my motorcycle paperwork out of my top box on my motorcycle than it did to go through Immigration and Customs together. I watched real close as Immigration stamped my passport and then checked that the stamp had the right date. The Customs Officer….all he did is take my motorcycle ingress paperwork and he was done. I actually asked the Customs /Aduana Officer if he forgot something because I was in and out so fast. He said no, were finished, you can go. I drove out nice and slow in case someone jumped out a door and said “Hey wait, we forgot this one stamp on your exit paperwork”! But that didn’t happen and I was glad of it. 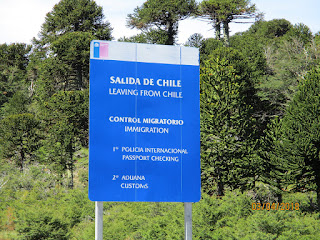 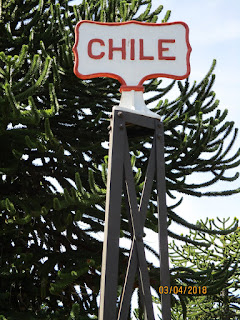 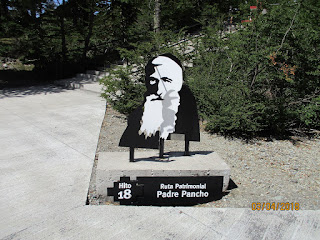 I drove up to the actual border and took some pictures. They actually had a real border marker. I took some selfies of me on each side of the border. They look kind of goofy. So, I took selfies with my glasses on and off. The pictures still looked goofy. I finished up with my picture taking and a guy rolls up on his Suzuki DR400. A young lad, I could tell by looking at his face. I introduced myself and told him I was from the U.S.A. He said he was from Israeli and his name was Noam. We shook hands. He asked if I was going to Chile or Argentina? I told him I was going into Argentina and on down to Ushuaia.

He was riding into Chile with intentions of ending his ride in Prudhoe Bay, Alaska. I had to smile and told him to keep up the good work. We talked about our motorcycles and he said if he could find one he would like to purchase a Kawasaki KLR650. He had heard they come with a good reputation. I finally asked him how old he was and he said he was 23 years old. When I was 23 years old I was still in the Air Force and was only thinking about Harley-Davidsons. I had never heard of riding motorcycles in foreign countries and here is this kid riding around in the Americas like it was his back yard. He said he needed a new front tire and he sure did. I could see the chords / canvas showing through his tread. He said he was going to change tires in Santiago, Chile. I gave him a telephone number and name of a guy I met in a gas station who lives in Santiago who might be able to help him out. I forgot to tell him he speaks good English and I forgot to take his picture. Blasted. Anyway, we separated ways and he headed into Chile and I into Argentina. 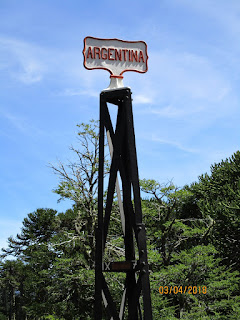 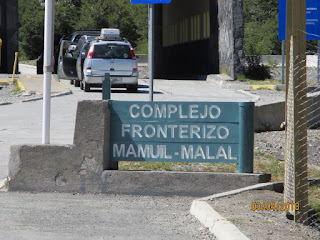 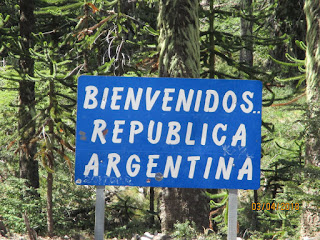 I continued on to the Argentine Border. I took some more pictures of the Volcano Lanin and some border signs. I grabbed my paperwork and headed inside. I entered the wrong door for Immigration and everybody knew it. Anyway, Immigration requested my passport and my Carnet. I told them I didn’t have a Carnet de Passages en Douane and the whole place blew up. After the ruckus subsided I realized they wanted the title of my motorcycle. Maybe that’s the word used in Argentina for the title of your vehicle. I don’t know. I believe Carnet de Passages en Douane is a French name for a complete list of all the belongings you have on your motorcycle and the motorcycle itself. It’s used by Customs and Immigration. It basically says that when you leave the country, everything you entered the country with will leave the country with you. You can’t sell your motorcycle or anything else like cameras, tools and computers. You can be fined severely for that wrongdoing. It cuts the paperwork to a minimum and also allows you to get through Customs and Immigration much faster. That’s what I was thinking when they asked for a Carne. Anyway, we all survived that and my passport was stamped and my title returned. The passport lady folded up my title, which ticked me off. You can’t fold and unfold the title without wearing out the title. I asked her not to, and all she thought was “you dumb American.”


I went over to Custom / Aduana and they typed up my Motorcycle Ingress Paperwork. That all went smoothly. I got copies in case the police asked for paperwork on the motorcycle and I was good to go. Guess what?  The customs guy folded up my title just like the immigration lady did. I was glowing in the dark. All through Mexico, Central America and South America no one ever folded up my title. It’s not a big thing but I don’t like it. 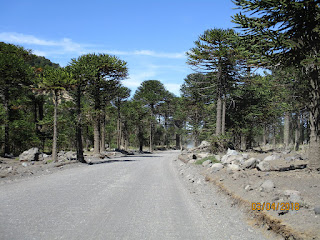 I was cleared out of the border and continued on down the road. The road out of the park was gravel and washboard for 6 Miles / 10 Kilometers. It about rattled my teeth out. Once out of the park I was back on black top or pavement again. Yeah. I wanted to drive to San Carlos de Bariloche today but that was not happening so I will stop in Junin de Los Andes. 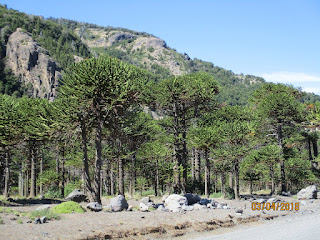 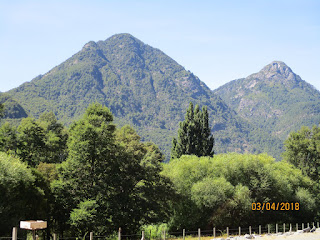 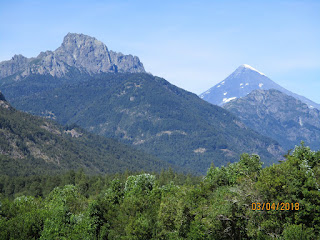 The hotel I found is my kind of a hotel. Motorcycle is at the front door, no stairs, no elevators, no security, no computer run reception, no parking ramps, clean and cheap. It’s a really nice place and the bathroom even has a bidet. Look it up. I got checked in and my motorbike unloaded. It still is a novelty to see green grass and trees and this place is all green. I decided to walk in the back yard and check the place out. I see they have water running into two small water troughs. So, they must have critters running around. I have seen a rabbit. They also have stick in each trough in case a critter falls in that he / she can climb back out. Lawrence and Eddie Strobach, the bachelor farmers who lived near us when I was growing up, used to have a floating stick in their water barrels which the squirrels used to get out if they fell in. It was mostly red squirrels that fell in. If you can believe this they also have dandelions down here to. 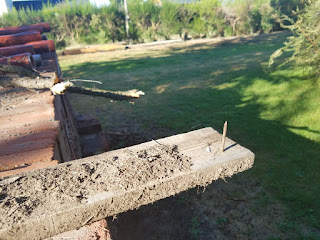 So, I was in the backyard snooping around and walked past a brick pile and stepped on a nail. It went through my shower shoes / flip flops and into my foot. I was standing there saying “what the hell?” I picked my foot up and the board came with it. I couldn’t get my foot out of my shower shoes because the nail was stuck in it. So, I stood on the board with my right foot and lifted my other foot off the nail. I know you all know this……..there was a little blue cloud hanging over my head while this was going on. I also know what the implication of stepping on a nail are. 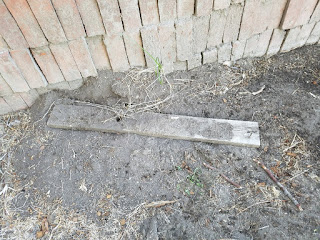 I limped back to my hotel room and took a look at the damage. It was bleeding which was good. So, I decided to ask the hotel receptionist if she had a pan so I could soak my foot. I explained that I stepped on a nail in their back yard and showed her my flip / flop and the hole in my foot. She immediately ran and got some alcohol to clean the puncture. She found a pan and I soaked my foot for about a 1/2 hour. I tried to keep it bleeding hoping it would flush out any potential infection. I don’t know how successful I was. The hot water wasn’t as hot as I would have like it. I would have liked to have had some Epson Salt or a plant leaf. None of that was to be found. So, I went to bed saying if my foot is swelled up and red in the morning I’m going to have the hotel staff help me find a doctor. The puncture was about 1/2” behind my 2nd smallest toe on my left foot. It hurts if I stand on it but with the weight off it was pretty much painless. Thank goodness I got a tetnus shot before the trip. I continued working on my tomorrows plans thinking I would be leaving in the morning. That all depends on my foot.
Posted by Beauty at 7:00 AM