7 March 2018 – I got up and checked my foot out. There was no significant redness or swelling. I will be leaving today. I still limp when I step on my foot, but otherwise I’m going to try it out and see how it holds up walking on it.


I took the cover off my motorcycle and there were all kinds of little critter footprints on the seat. The critter probably needed a place out of the cold and wind for the night. I was happy he / she didn’t chew up the seat. I loaded my motorcycle, then had some breakfast and left. 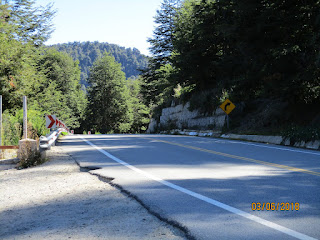 I stopped at the bank in Town Junin de Los Andes and attempted to purchase some Argentine Pesos. No Luck, the ATM did not like either my debit or credit card. I even had one of the bank employees give me a little assistance. I went back to my motorcycle and texted Mary about the problems with my debit and credit cards so she could check to see if there had been an unauthorized withdrawl from my account that locked it up. I also told her that my phone jumped 3 hours ahead for no reason at all. Another something to annoy me. We thought maybe I was setting right on a time zone line and the phone didn’t know which time zone it was in. I told her I would check it again once I arrived in San Martin de Los Andes and left the bank. 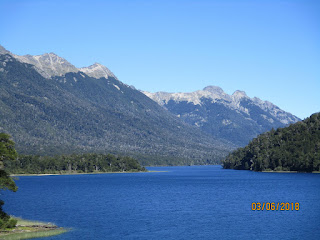 When I got into the city, I had Blanche help me find an ATM. I walked in and none of the ATMs had Master Card, Visa, American Express stickers on them. Not a good sign. I held my breath when I put my card in that it wasn’t going to be rejected or blocked. It worked and I withdrew the money I needed. I went outside and checked my phone and the time was still 3 hours ahead. Mary and I texted back and forth for a while about what might be wrong. We finally gave up and I told her that I would check it again when I reached San Carlos de Bariloche. 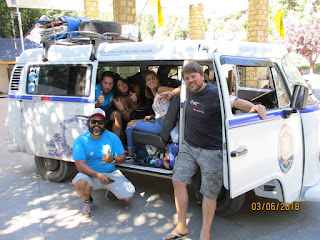 I stopped and filled up with gas before I left. I met a VW Bus full of young people in the gas station, probably 7 or 8 of them traveling in South America. I didn’t get any details because none of them spoke English. They gave me one of their stickers and I gave them one of my blog cards. I left out of there heading to San Carlos de Bariloche. It was pretty much a walk in the park, so to speak, with mountains and some huge beautiful lakes. It was pavement all the way with limited truck traffic. 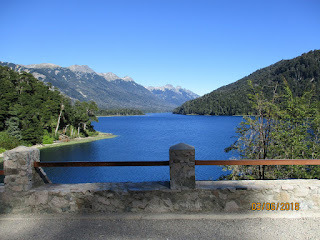 I arrived in San Carlos de Bariloche about 6:30 p.m. I passed through 2 police / policia checkpoints and held my breath that they didn’t wave me over for a papers check. Once I got within the city limits I stopped and typed in the Hostal location and Blanche calculated it. I wasn’t more than 300 Yards / 300 Meters from it. I drove down the street, hooked a u-turn in the roundabout and went back up the street. I was there. 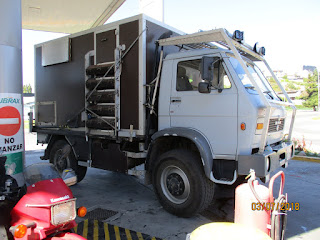 I checked in and then carried my bags to the 2nd floor. My foot wasn’t digging all that punishment. All my luggage made it to the 2nd floor just fine but at slightly slower pace. I had to pay for secure parking next to the hostal for my motorcycle. At least it wasn’t setting out on the street. While I was unloading my motorcycle, I met a Ukrainian Couple. They stopped and talked to me because they recognized the abbreviation for their country on my saddle bags / panniers. The husband's name was Alex and his wife’s name I forgot. My apologies to you. They asked what route I took through Ukraine when I drove through. I told them the exact route I couldn’t remember because it was almost nine years since I rode my motorcycle around the world. We also talked some about the people I met. It was a nice short conversation. They spoke really good English. I helped the receptionist with the pronunciation of some English words on the way to my room.  When I got there, I opened up this word document to do more updates, and it was blank. I just about turned white and passed out.  Luckily I was able to recover it.
Posted by Beauty at 7:27 AM