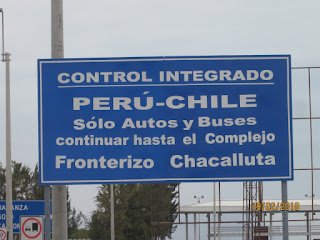 19 February 2018 – I got up and prepared to leave Tacna, Peru. I was preparing to cross the border from Peru to Chile. Getting out of Tacna was quite simple. I picked a wrong exit on a roundabout which was a good thing because I had to turn around and Eureka! There was a gas station just when I needed gas. Getting to the border was pretty uneventful. It was freshly paved four lane black top which was nice. No pot holes to avoid. The Peru side of the border was now incorporated into the Chile Customs and Immigration side of the border. The old Peru Customs and Immigration building now sets empty void of a job. Chris sent me all the instruction on how to get thru the border which was very helpful. I had to purchase insurance for Chile which wasn’t available at the border. You had to purchase it online or buy at an Office downtown Arica, Chile. 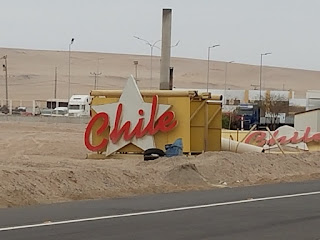 I took a couple of pictures of the signs crossing the border with my camera, when low and behold, it suddenly stopped working. This time I think it died for good. That does not make me happy. I get to the border and get most of my forms. One form I had to purchase from the 2nd floor. I filled it out in the air-conditioned cafeteria. I translated all Spanish with the help of my cell phone. Two women helped with two questions. One was my passport number and the second was my birthday. The questions were abbreviated and didn’t translate.


I went and stood in line next to a German motorcycle rider. I lent him my pen because he didn’t have one. I asked if he would return it because it was a pen I got in Russia and he said he would. I told him about the forms and where to get them etc. etc.


I went through Migration and everything was flowing smoothly. But then one of Immigration people noticed I was missing a stamp on my form. The missing stamp caused a big delay for me and I also had to fill out a blue form all Spanish. Again, I translated it with my cell phone. I had a couple of questions. I asked a man setting at my table. He spoke fluent English and answered all my questions I had. I had to get back in line and wait for 50 people ahead of me to pass thru the same window I already went thru once. That was just to get the missing stamp. Everything from then on flowed smoothly thru Customs / Aduana. 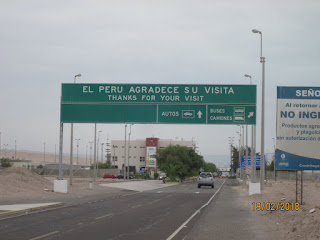 I met Russ, the guy from Chicago, Illinois again. I told him about all the forms and where to find them. I got my bags inspected and then my motorcycle inspected by Agricultural and Aduana Officials. I repacked my motorcycle and I was good to go. I asked the customs officials if I had all my stamps and they said I did. I saw two more motorcycles going thru the border but I didn’t speak with them. They seemed to get through so much faster than I. I wondered how that could happen. They may have had all their forms filled out before arriving and spoke Spanish - a big plus when crossing borders. The German guy got thru the border a good hour and half before I did. I saw him leave and commented to myself that he did not return my pen which made me think less of him.


But I had bigger worries to deal with than the loss of a pen. When I returned to my motorcycle to have the bags inspected there was my pen. He left it visibly attached to my bags. I had to take back all the bad things I said about him. Mary found the office for purchasing motorcycle insurance. I drove into Arica and went to the address. Actually, I had some help from a young married couple who took an immediate liking to my motorcycle. They used their phone and the address to track down the location. I was only about 100 Yards / 100 meters away from the address. I thanked them for their help and they replied that they were glad to have helped.


While I was in the downtown plaza I purchased Chilean Pesos and ate at McDonalds. I then drove to the hotel which Blanche graciously guided me to. My new system of keeping Blanche on track seems to be working. I was in reception getting checked in and guess who just walked in the door. Russ from Chicago. You could have blown me over. We talked briefly and he departed for town. We agreed to talk some more later that night.


In the meantime, I had to put in new front brake pads. The steel backing on one of the pads was starting to rub on the disk rotator. The front brake pads had 1/16 Inch / 1.5 Millimeter left on them. It was a small ear on the pads that was starting to rub. After I replaced the brake pads I adjusted the chain and oiled it. I had everything completed before dark. I have a long ride in front of me tomorrow. Russ and I hooked up later and talked some more about our experiences traveling thru Mexico, Central America and South America. Before long it was almost 11:00 p.m. and I had to get to bed.
Posted by Beauty at 2:21 PM