20 February 2018 – I got up late because of the 2 hour time change when I crossed the border. I started planning my day which I didn’t do last night because of the work I did on my motorcycle and the time I spent talking with Russ. I went to eat breakfast at 8:00 a.m. and then finished planning my day. Russ stopped by again and we talked some more. He told me he had a cut in his front tire that went all the way around it. It kind of sounded suspicious like someone may have slashed his tire. He said the German guy looked at it and said to him it looked like someone had tried to slash his tire. I am inclined to believe the German guy because if your motorcycle is rolling it’s hard to cut the tire 360 degrees. You would have one slash mark and not a cut going 360 degrees around the tire on the side wall. I asked him if he noticed any suspicious activity around his motorcycle when that happened. He said no. We parted ways saying that we hoped to see each other down the road again. 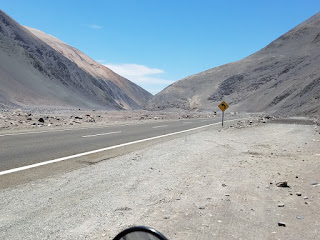 I barely left Arica, Chile before noon and was on my way Iquique, Chile. The roads were good and a day of endless brown sand desert with occasional green valley with a river. You could almost call them an Oasis in the desert. I saw two shantytowns, one leaving Arica and another farther on down the road. I stayed the night in Pozo Almonte. A nice little town. It seems everything is more expensive in Chile. I found out if it says $33 Pesos it means $33,000 Pesos. I made that mistake at the ATM.


The women at the hotel cooked me up a real nice meal. It was almost too much to eat. I later planned my route and hotel in Autofagasta, Chile. Finding a hotel is getting more and more challenging. I plan on being in Antofagasta tomorrow night. So, time to get Blanche on track etc. etc.
Posted by Beauty at 4:20 PM